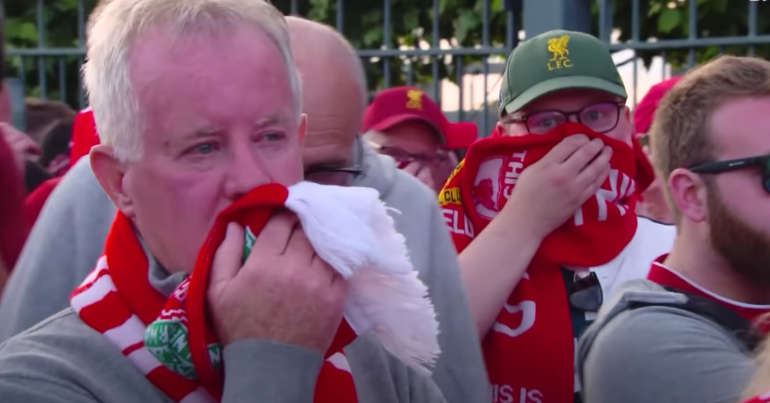 French police teargassed and pepper sprayed Liverpool fans before the Champions League final on Saturday 28 May. Fans waiting at turnstiles were pepper sprayed through the gates by the police. Some, including children, even had teargas used on them. The unrest caused a delay to the planned kick-off time.

Predictably, French government officials and football organisers have tried to blame the fans for the actions of the police. Organiser UEFA (Union of European Football Associations)’s initial message to explain the delay was to say that fans were “arriving late”:

UEFA's official message says kick-off delay is due to fans "arriving late". Which is absolutely not what reports outside the ground suggest.

What we really have to bear in mind is that what happened, first of all, was this mass gathering of the British supporters of the Liverpool club, without tickets, or with counterfeit tickets.

However, as one social media user pointed out, police propaganda wasn’t going to hold water here:

Today is a reminder of how it would have taken 30 minutes to correct the record on Hillsborough if there had been social media, instead of 30 years

While singer Camila Cabello was singing and dancing in the stadium, fans outside were in distress. A couple of days later, we can see first-hand accounts from both fans and journalists as to what was really going on.

Gary Lineker said the reaction from police was “unjustified”:

This is good accurate reporting. It was shambolic. The unnecessarily poor treatment of people peacefully going to watch a football match was awful & unjustified. I saw no behaviour from Liverpool fans that warranted the police reaction. Just fearful fans wanting to see a game. https://t.co/SnvBbUGxr6

Fans queuing outside with tickets for a gate that’s been shut for no reason just been tear gassed. Throughly unpleasant experience and so dangerous. This isn’t how fans should be treated in a civilised society. Unacceptable

Some fans showed tickets through the gates:

Journalist Simon Hughes shared details of the terrible organisation at the stadium entrance:

UEFA blaming late arrival of fans. This is a fucking disgrace. Not true. Build up caused by dangerous organisation way beyond time fans are normally expected to enter a stadium. They suddenly gave up on a bad idea.

Hughes also recounted information given by a UEFA official outside the stadium:

He has also said the problem is locals trying to get in rather than fans arriving late.

Liverpool fans were well-behaved, patient, happy to be in the city and attending the game. A lot of them had spent an awful lot of money to support their team. But they were met with a dangerous mix of intransigence and incompetence from the French authorities.

Presenter Paul Machin also called out the lack of organisation:

I've been going the footy for 33 years and followed Liverpool all around the world. I've been to 5 Finals in Europe.

I have never seen such ineptitude in organisation, but worse was the horrendous heavy handed behaviour of the French police. Tear gas. Guns pointed at fans.

And Liverpool left-back Andy Robertson said the treatment of the fans was “disgraceful”:

To the Liverpool fans in Paris, what happened to you was disgraceful. You deserve so much better and now answers must follow. Hope you all got home safe ❤️ pic.twitter.com/ix24OzEBi2

Of course, this is far from the first time that terrible organisation and aggressive policing has happened at a football match. Just last month, Liverpool commemorated the 33rd anniversary of the Hillsborough tragedy, in which 97 fans died. As The Canary’s Joe Glenton wrote:

The tragedy would come to symbolize Thatcher-era Britain – a byword for class war, corruption and gutter press lies.

All of those who died that day were Liverpool fans. In the aftermath, the right-wing gutter press and other sections of the British establishment launched a war of slander and obfuscation against the city and its people.

Disappointingly, some people took to social media to chastise Liverpool fans for the Hillsborough disaster. Eric Bocat highlighted this:

Literally every tweet from reporters who are at the ground is making it clear that the fault for this lies firmly at the feet of UEFA and the French police, yet dickheads are still blaming Liverpool fans and using deadly disasters of the past to score points on here

The Athletic‘s Adam Crafton pointed out that bad organisation is becoming worryingly commonplace:

Now three finals in a year where there appear to be difficulties in ensuring fans safely enter stadiums. Circumstances very different at Wembley, in Cameroon and tonight in Paris but it feels like authorities/organisers treat these as one-offs rather than trends to learn from.

In fact, just a couple of weeks ago at the Europa League Final in Seville, Rangers fans complained about policing around the stadium. Football Scotland reported:

Rangers have revealed they are continuing to work with Frankfurt and supporters groups to get answers over the shocking organisation of the Europa League Final in Seville.

Fans were left without water inside the stadium while there were also a lot of complaints about policing around the ground.

The French state is becoming more and more brutal towards anyone it dislikes. It's tradition of cruelty towards minorities and colonies appears now to be extending towards white people as well. #LiverpoolRealMadridhttps://t.co/PeqpJm8ETl

With the gilets jaunes (yellow vests) movement a few years ago, social sciences researcher Mathieu Rigouste made it clear that the violence of French police is not new – just more visible:

The modern-day French police are shaped by the violence of their history – many of their methods of surveillance and repression found their way to the homeland from the repertoire of forces in charge of “indigenous north Africans” in former French colonies.

We can never trust governments or police to tell the truth about the violence and mistreatment for which they’re responsible. It’s only from first-hand accounts and footage on social media that we can piece together the despicable actions of aggressive police forces. The treatment of the Liverpool fans this weekend was just the latest example of French police using colonial tactics to attack people.