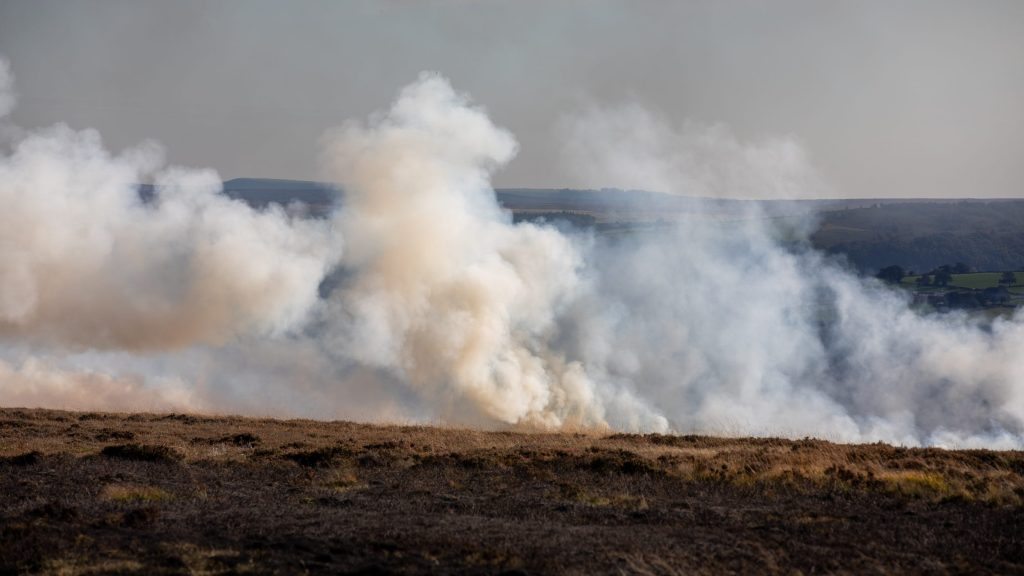 Officials are investigating claims that peatland sites have been burned on grouse moors despite a ban. The sites have been described as England’s “national rainforests”.

Environmental groups say that satellite monitoring and reports suggest dozens of fires were set as part of grouse moor management. This took place on protected deep-peat areas during the winter.

BREAKING: A satellite investigation by @UE reveals widespread burning on English peatlands, despite new government ban. We found dozens of fires that may be illegal.

Here's how we did it: pic.twitter.com/oNLOaFhZqQ

The importance of peat

The Environment Department (Defra) said it is now investigating the potential breaches of the heather and peat burning regulations. These were brought in to protect what the government described as the country’s national rainforest, and to help tackle climate change and nature loss.

Grouse moor managers carry out the burning of heather on peatland during winter months to stimulate new growth of the plants. Red grouse can feed on the new growth, and managers say their methods do not harm the peat below.

However, conservationists disagree. They say burning peatland destroys vegetation and erodes the carbon-storing peat. And it also reduces the peat’s ability to slow the flow of water and prevent flooding in the valleys below.

The UK has 13% of the world’s blanket bog, which is unwooded habitat on deep peat. In a healthy state, this is an important store of carbon and a natural habitat for wildlife. But on the other hand, it produces carbon dioxide emissions when degraded.

In May 2021, Defra brought in a ban on burning on blanket bog with deep peat – more than 40cm – in specially protected areas of England without a licence. The ban had exemptions for rocky or sloping ground.

Officials said there was consensus that the burning of vegetation on blanket bog was damaging to peatland formation and the condition of the habitat. And it made it more difficult or impossible to restore the habitats to their natural state.

It identified 251 fires set over the burning season. Of these, 51 took place without a licence in nature sites protected by conservation designations. These areas were also identified by government agency Natural England maps as deep peat – though that’s based on modelling and does not conclusively mean there is deep peat.

Physical spot checks at a few estates found that while some landowners were taking care to only set fire to heather on areas where the peat is less than 40cm deep, others burned on the deep peat covered by the ban, the campaigners said.

Separate data from campaign group Wild Moors showed there were 1,203 reported incidents of grouse moor burning on peatland, including 191 reports of suspected illegal burns in contravention of the ban.

Conservation group the Royal Society for the Protection of Birds (RSPB) said it received 272 reports of fires over the last season. 79 of these took place on areas mapped as deep peat and designated sites.

However, the Moorland Association, which represents grouse moor estates, said the investigation showed the overwhelming majority of controlled burns complied with the legislation. On-the-spot checks found only two incidents which may have been on deep peat – and the evidence was not conclusive.

We are confident that our members are compliant (and) are following best practice guidelines and we are in touch with Defra on this matter.

It is important to note that the fire and rescue service in England supports controlled burning on moorland for the prevention of wildfire, the single most serious threat to the carbon store, as wildfire ignites the underlying peat.

“Shot through with loopholes”

We are investigating potential breaches of the heather and peat burning regulations and cannot comment further while investigations are ongoing.

The Government and Natural England continue to work with landowners to promote sustainable upland management practices, backed up by a record funding to protect and restore England’s iconic peat landscapes.

Rebecca Newsom, head of politics at Greenpeace UK criticised the current ban. She said it is “shot through with loopholes”, poorly enforced and some landowners appear to be ignoring it. She added:

Peatlands are the UK’s largest carbon store on land, help prevent floods and are home to rare plants, insects and birds.

Why on Earth is the Government allowing them to be turned into charred wasteland for the private gain of a few?

If ministers were ever serious about protecting this vital landscape, they should make sure this evidence is thoroughly investigated, peatland burning is comprehensively banned in law and extra funding is committed to guarantee enforcement.

“We are in a nature and climate emergency”

It’s clear from the evidence we have collected that the new peatland burning regulations in England are not working and that burning is still taking place at a massive scale on peatland vegetation and inside protected sites.

We are in a nature and climate emergency. Intensive and damaging land management practices such as burning continue to harm and further threaten these vital carbon and nature-rich ecosystems.

He called for a full ban and for grouse shoots to be licensed.

By allowing grouse moor burning to continue in any capacity, the Government is not only permitting peatlands to be damaged, but also giving space for the existing rules, as shortcoming as they are, to be broken.

Wild Moors is urging the Government to extinguish grouse moor fires once and for all by introducing a complete ban on burning peatlands.