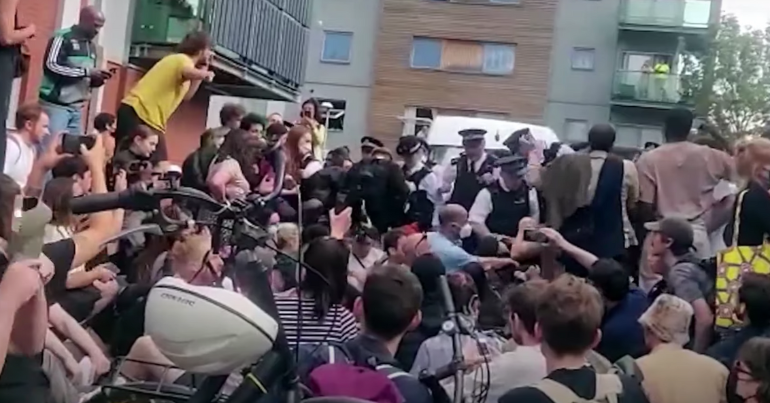 The people of Peckham came together over the weekend to push back against an immigration raid. Over the course of an afternoon, the crowd swelled from a handful of people to hundreds. Immigration forces and police were there to take away a man for “immigration offences“. He was being held in a van.

However, after Lewisham Anti-Raids tweeted for support, people came to help:

After 4 hours of resistance and a crowd of 200 people they’re letting our neighbour go! People power wins. We’re shouting ‘don’t come back to Peckham!’ pic.twitter.com/qRQUVAnFwf

People were able to spread the word online:

This is how many people it required to start a successful action against an immigration raid. There were 7 people that held ground until more people could arrive. By the time we won there were ~200 people in that close. https://t.co/Lc1js0vbY3

Some people sat down and laid down their bikes:

Members of the public have previously been able to halt immigration raids by getting in the way of police vans and officers. In May 2021, people in Glasgow gathered to stop Border Force officials from taking men away. And this year, in May, another crowd in Edinburgh forced immigration officers to back off when they were trying to detain residents.

There’s now been successful immigration resistances Glasgow, Edinburgh and now London, in just the last year. It can be done anywhere if people know what they’re doing, spread the word and turn up https://t.co/C7MGRJjlo8

However, none of this is to say that everything went smoothly in Peckham. Plenty of people on the ground shared disturbing footage of aggressive police.

In one video, screams ring out as police try to push through people:

The police in Peckham were violent today. They were determined to clear the road to get the van out with their hostage inside. We didn’t let them. pic.twitter.com/I55VJAr9NH

And one person observed how we can use our bodies for resistance:

Our bodies are political tools that can grind the gears of the system to a halt. https://t.co/HDCHG6cXqi

Another added that while filming cops is essential, it’s not the only thing to do:

This is why filming the cops (tho useful and important) is not enough.

Filming alone assumes there’s some functional accountability system whereby footage of cops breaking the law will somehow allow us to hold them to account https://t.co/Gt4NAVIn6H

After all, if this is how the police behave when they know they’re being filmed, what else could they be up to when cameras aren’t pointed at them?

And this is what they're like with dozens of cameras on them https://t.co/hndneYke9B

As the police gave up and started to leave Peckham, people cheered and chanted “shame on you”:

This beautiful moment will stay with me forever. Join an anti-raids group in your area. If there isn't one, build one. Stand by your neighbours and resist. We can win ! ✊️ https://t.co/eEaXjvZ5UW

There were also chants of “don’t come back to Peckham”:

This is what it looks like when we #withdrawconsent. The walk of shame for police and immigration enforcement officers leaving a Peckham estate, after releasing the person they detained today is a thing of beauty. pic.twitter.com/NTvpcfJjuS

There are more of us than them – never forget it! 🔥 pic.twitter.com/u5hJ4ctFHk

Community solidarity isn’t sitting around with neighbours to celebrate an undemocratic coloniser like the Queen. It’s taking care of neighbours by resisting police violence. It’s responding to calls for aid. It’s coming together to protect people from racist immigration policies.

Peckham, just like Glasgow and Edinburgh, showed everyone how it’s done.

Featured image via screenshot – The Mirror/YouTube