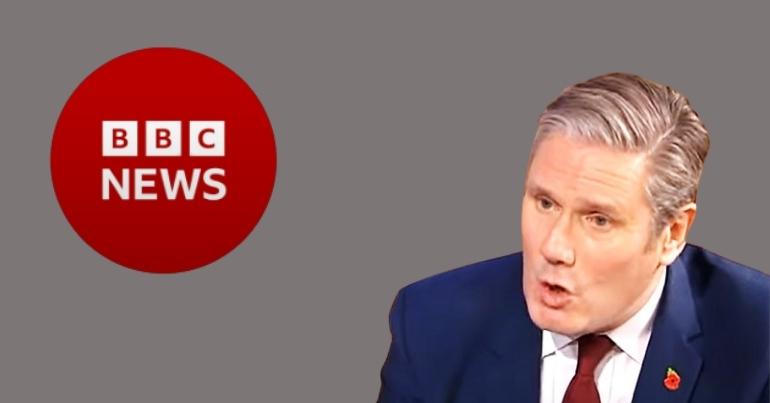 People have dragged Keir Starmer over comments he made about NHS workers on Sunday 6 November. However, his broader comments about immigration have also prompted a backlash. People have accused him of not only pandering to racists, but being a racist himself – with Jeremy Corbyn dragging him via a subtweet.

However, always one to be on the side of the establishment, enter the BBC to minimise the damage for Starmer – by changing a headline to make him look slightly less racist.

BBC Scotland‘s The Sunday Show was interviewing Starmer. The host asked him about what his wife Victoria, who works in the NHS, thinks the problems are. Starmer said [2:17]:

We haven’t got enough people.

However, the Labour leader’s solution to this was crass at best. Starmer said:

Starmer called immigration in the NHS a “short-term fix”. He also went further on immigration, saying:

We don’t want open borders. Freedom of movement has gone and it’s not coming back. So that means fair rules, firm rules, a points-based system. What I would like to see is the numbers go down in some areas. I think we’re recruiting too many people from overseas into, for example, the health service. But on the other hand, if we need high-skilled people in innovation, in tech, to set up factories etc, then I would encourage that.

Starmer’s comments are literally dog-whistle racism – as people pointed out on social media:

Starmer, Mandelson & their horrible friends know this is racist, xenophobic & will appeal to Red Wall Gammon and Daily Mail readers.

They also know it excites the centre/right “liberals” who will contort language to justify it. https://t.co/3z8X9D9Tzb

Up yours Keir Starmer, absolutely up yours. Immigrants like my Dad risked their lives working in our NHS during the pandemic.

And now you’re putting out another racist dog whistle – saying ‘we need the numbers from overseas to go down’. https://t.co/3vw5Myl2UA

Professor of accounting Richard Murphy took the time to take down Starmer in a blog post, saying the Labour leader would not be able to form a “credible government”:

How could a party headed by Starmer form a credible government? https://t.co/vhIz6lTImh Starmer made comments yesterday so grossly offensive that I cannot see how his party remains politically credible

And as a doctor pointed out, contrary to what Starmer says, the NHS does need a quick fix:

Aside from appeasing racists, it would take years to train up sufficient numbers and the NHS needs more staff now.
In addition many are leaving because of poor pay and he refuses to stand up for them.

The BBC: propping up Starmer’s racism

Then, the dog-whistling, racist BBC aided and abetted Starmer in his racist pandering. It changed the headline on its article about his comments – clearly trying to make the Labour leader look slightly less racist:

Has everyone noticed @BBCScotlandNews and @BBCNews have changed the headline to the Keir Starmer story of basically “needing less foreign doctors” to sound less racist after the backlash he’s getting?

So, Corbyn decided to subtweet at Starmer – not exactly subtly, either:

As nurses vote for historic strike action, let's recognise the immense contribution that people from around the world have made to the NHS.

Our health service would not exist without an international workforce. They deserve our full support.https://t.co/V9TO4SBSU1

Starmer’s comments once again show that Labour is intent on toeing a right-wing line to curry favour with that voting base. It’s clear why Labour’s doing this: the party has always had a racism problem. But also the right-wing rump of Labour thinks the answer to winning a general election is to copy the Tories. And the BBC will quite happily prop this up – to the ruin of us all.