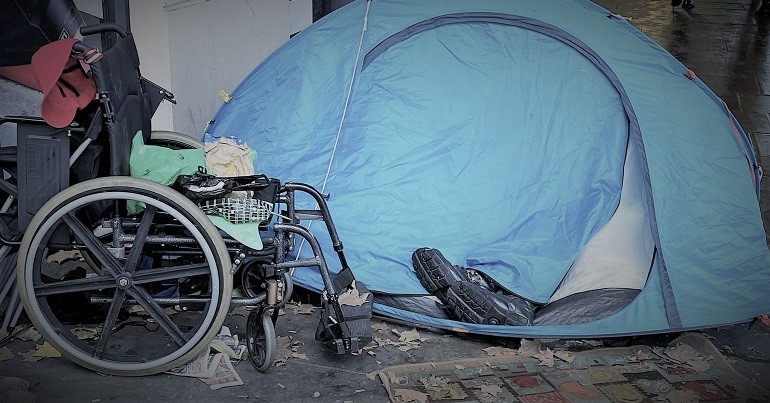 A protester captured a devastating photo at the People’s Assembly demo on Saturday 5 November. It’s one that should haunt the Tories. This is because it shows a disabled homeless person – as thousands marched against the government.

Get the Tories out

People’s Assembly staged its latest national demonstration on 5 November. Thousands of people turned out to call for a general election and to protest against the Tories:

Another fantastic photo from today’s National Demonstration! The People’s Assembly is a coalition of unions and campaigns. Join Us and become a member today: https://t.co/iqmL9cJM3w
Through organised collective action we make a difference ✊🏽✊🏿✊🏼 Photo: Jess Hurd Photography pic.twitter.com/ED2KuPWpPS

Thousands of people take to the streets for a national demonstration. The Peoples Assembly are #protesting against the government's lack of action in dealing with the #CostOfLivingCrisis and is calling for a general election. #London, UK November 05th 2022 pic.twitter.com/MgchHAzh9b

Former Labour leader Jeremy Corbyn had hit the headlines during the week after he said he lived “rent free” in prime minister Rishi Sunak’s head. Corbyn also spoke at the People’s Assembly rally. He said that the Tories were sacrificing the UK:

All on the altar of profits to distant hedge funds. That is the reality of what modern Britain is about.

We are strong because we are many, and they are few. pic.twitter.com/FpvOWBfr3z

Disabled homeless people: the reality under the Tories

Disabled People Against Cuts (DPAC) member and activist Paula Peters also spoke at the People’s Assembly rally. And she took photos along the way. One of them was of a homeless person’s tent with a wheelchair next to it:

Not far from where the @pplsassembly March began a disabled homeless person is on the street.
This is the impact of cuts, of government policy. 21st Century Britain @RishiSunak you need to stop the cuts and disabled people, no human being should be on street pic.twitter.com/kvYJNo2Kku

The fact this homeless person is disabled is not uncommon. As charity Just Life wrote:

A study by Crisis of 14,922 individuals, 70% of whom were homeless while the others were either at risk of homelessness or had a history of homelessness, found that 39% reported having a disability. Another study… found that 12% of a group of people experiencing homelessness showed strong signs of autism. The prevalence of autism in the general population is approximately 1%.

This figure has risen in recent years. Crisis reported in 2019 that it found a 53% rise in:

Moreover, 45% of homeless people live with mental health issues. This figure rises to 80% for rough sleepers. Peters, whose photo is evocative of the situation, thinks she knows why all this is the case.

DPAC formed in 2010. Now, after 12 years of brutal coalition and Tory austerity, things have got progressively worse for disabled people. Successive governments have cut social security, Housing Benefit and the Local Housing Allowance; they’ve introduced the bedroom tax and chaotic Universal Credit; they’ve overseen rising inflation, energy and food prices, and presided over cuts to social care. Many disabled people are in energy and social care debt – chased by bailiffs for money they haven’t got.

The travesty of this [is] disabled people are in a precarious position of barely surviving – or dying. If they can’t afford to live, they end up on the street. This shouldn’t be happening. More disabled people will end up this way. With the Tories’ budget in a few weeks, that’s sadly going to be the case.

However, it’s not just the Tories causing disabled people’s precarity which Peters thinks is a problem. She noted that during the People’s Assembly march:

What struck me was the sheer number of activists walking past this homeless, disabled person to get to the start of the demo. People didn’t see the sheer poverty literally beside them. They were too intent on getting to where they needed to go. It was like the entire march went through the homeless disabled persons space: people marching to resist this government against precarious situations such as this. It is so important to show the horrific situation disabled people are ending up in. I think some of the protesters on the People’s Assembly march chose not to see the homeless, disabled person – because deep down there is a stab of fear it could be them.

It could be you, next

It goes without saying that we all need to be fighting back against the Tories and the system. However, we particularly need to be allies for chronically ill, disabled and homeless people. As Peters said:

DPAC are still campaigning and fighting the government. But disabled people’s campaigns need all the support we can get, to pile the pressure on the government to stop the attacks on us. We need to resist this government with everything we have but we need support to do this.

As Peters summed up:

No-one is immune from disability or losing their job. Circumstances change – and you can end up like this.

Successive UK governments have systematically persecuted chronically ill and disabled people. It got to the point where the UN accused Tory-led governments of “grave” and “systematic” violations of disabled people’s human rights. That was in 2016. And in 2022, as Peters’ photo shows, little has changed.