England cave-in over armbands as Iran's captain speaks out 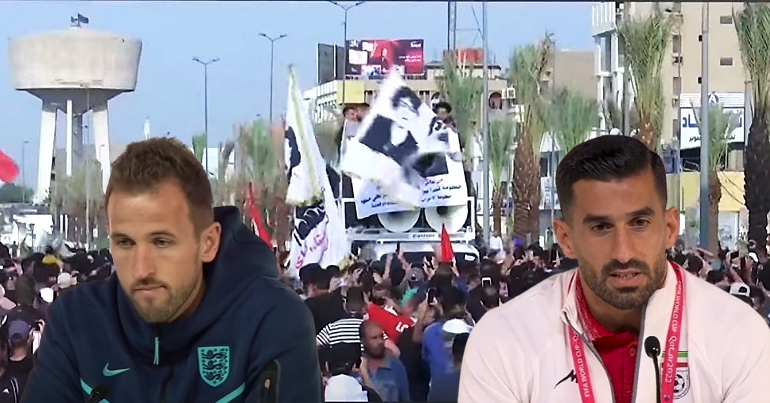 England captain Harry Kane did not wear One Love armbands during their opening match. Meanwhile, Iran’s team captain Ehsan Hajsafi spoke out defiantly against his own state, potentially risking arrest. Spot the difference?

As the Canary previously reported, Iran has been shaken by over two months of protests sparked by the death of Kurdish-Iranian woman Jîna Mahsa Amini, 22, after her arrest for allegedly breaching the strict dress code for women. Agence France-Presse (AFP) noted that the Iranian state could sentence 21 people to death over the protests. Amnesty International says Iran put at least 314 people to death in 2021. Norway-based Iran Human Rights (IHR) says the number of executions this year is already much higher, at 482 people.

Campaigners warn that not only do the authorities plan to execute protesters on vague charges linked to alleged rioting or attacks on security forces during the demonstrations, but also step up hangings not related to the protest movement, notably of prisoners convicted on drug-related charges. Amnesty said the authorities’ pursuit of the death penalty is:

designed to intimidate those participating in the popular uprising… and deter others from joining the movement.

The strategy aims to “instil fear among the public”, it added, condemning a “chilling escalation in the use of the death penalty as a tool of political repression and the systematic violation of fair trial rights in Iran”. However, as well as people protesting inside Iran, World Cup players and staff of the Iranian team are also taking a stand.

‘We have to fight’

We are here but it does not mean we should not be their voice or we must not respect them.

Whatever we have is from them. We have to fight. We have to perform and score some goals to present the brave people of Iran with a result. I hope conditions change as to the expectations of the people.

“I would like to express my condolences to all of the bereaved families in Iran. They should know that we are with them, we support them and we sympathise with them.”

Such bravery from Iran’s Ehsan Hajsafi, using his platform to stand up for human rights.https://t.co/bm9GY3lABk

Hajsafi is not the only Iranian public figure to have recently taken a stand against the state. As Al Jazeera reported:

Karim Bagheri and Yahya Golmohammadi, two former players for the national football team and current members of the backroom staff at the leading Iranian club Persepolis, were punished on Sunday for publishing posts in support of the protests on their social media accounts. Bagheri was fined 20 percent of his salary, while Golmohammadi was fined 15 percent.

Two actresses, Katayoun Riahi and Hengameh Ghaziani, were also arrested on Sunday. They had filmed themselves without a head covering in support of the protests.

Meanwhile, Kane and the rest of the England team couldn’t bring themselves to wear a rainbow armband in case they got yellow cards. BBC News reported that:

England, Wales and other European nations will not wear the OneLove armband at the World Cup in Qatar because of the threat of players being booked. The captains, including England’s Harry Kane and Gareth Bale of Wales, had planned to wear the armband during matches to promote diversity and inclusion.

A joint statement from seven football associations said they could not put their players “in a position where they could face sporting sanctions”.

“We are very frustrated by the Fifa decision, which we believe is unprecedented”…

As one Twitter user summed up about Iran and England:

Iran player Ehsan Hajsafi speaking out over conditions in Iran. That’s bravery. The FA & England players dropping wearing the One Love armband is such an act of pathetic cowardice #worldcup https://t.co/XneEZqWru8

Moreover, England’s cowardice has wider implications. As the Canary reported, a gunman killed five people and wounded 25 others in an LGBTQIA+ hate crime in the US. So, as one person tweeted:

And, as writer Jackson King said:

the conversations positioning the 'West' as lgbt inclusive in contrast to Qatar, alongside the Colorado lgbt club shooting and the continued attempts in the UK/US to neglect/legislate trans people out of existence is a lot to witness at once

The English Football Association (FA) could have backed the England team, but failed to. The corporate capture of football is such that players dare not push the limits of protest too far for fear of losing money or advantages in the tournament. However, as the director of IHR Mahmood Amiry-Moghaddam told the World Congress against the Death Penalty in Berlin recently:

Unless the international community sends a very, very strong signal to the Islamic republic authorities, we will be facing mass executions.

Clearly for the Three Lions, international solidarity with ordinary people comes a lowly second to their own careers – unlike Iran’s team.