COP27 failed to get planet out of the emergency room, UN chief warns - Canary 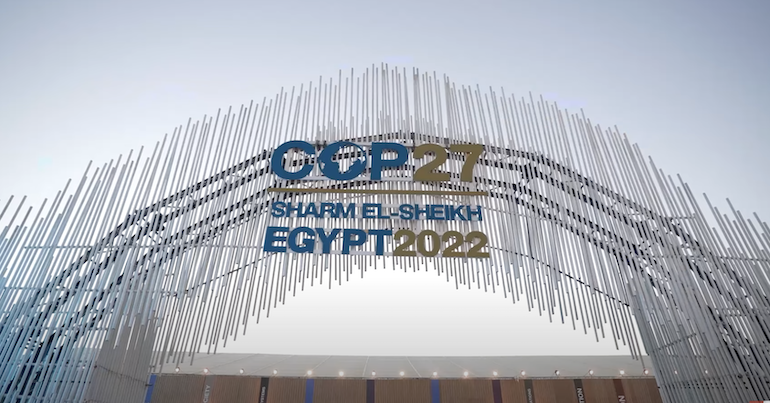 The UN climate summit, COP27, finished on 20 November. As the international body’s chief António Guterres highlighted, the talks concluded with countries taking “an important step towards justice” by establishing a loss and damage fund. This is a mechanism through which poorer countries can receive funding to help them cope with devastating climate impacts.

But Guterres warned that “our planet is still in the emergency room” because governments failed to commit to meaningful action on cutting emissions. Climate activist and director of Direction Zero Catherine Abreu summed up the situation:

A tale of two COPs in Sharm El Sheikh: On one hand a landmark decision to establish a loss and damage fund to address the devastating consequences of climate change, on the other a major failure to finally name and tackle the cause of the climate crisis: fossil fuels. #COP27

In other words, the summit delivered long-demanded recognition that countries on the frontline of the climate crisis – most of which have done little to cause it – need and deserve support. However, governments failed to tackle the cause of the crisis, namely excessive greenhouse gas emissions, primarily from burning fossil fuels.

The two-week talks took place in Egypt’s Red Sea resort of Sharm el-Sheikh. During the event, civil society groups and poorer nations relentlessly pushed for a loss and damage fund. This is a decades-long demand that finally got the backing of wealthy polluter countries at COP27.

A statement from the Alliance of Small Island States (AOSIS), comprised of islands whose very existence is threatened by sea levels rising, said the loss and damage deal was “historic”.

“The agreements made at COP27 are a win for our entire world,” said Molwyn Joseph, of Antigua and Barbuda and chair of AOSIS. He continued:

We have shown those who have felt neglected that we hear you, we see you, and we are giving you the respect and care you deserve.

With around 1.2C of warming so far, the world has seen a cascade of climate-driven extremes, shining a spotlight on the plight of poorer countries faced with escalating disasters, as well as an energy and food price crisis and ballooning debt.

The fund will be geared towards poorer nations “that are particularly vulnerable to the adverse effects of climate change”. But many of the key details of it, such as which countries will receive funding, are still to be decided. Critically, as one campaigner pointed out, it’s not a functioning fund yet and there are many mountains to climb before it is:

But the #LossAndDamageFund is EMPTY. The mountain is ahead of us, let’s climb it:
⏩US and other rich nations don’t shy away
⏩Billions 💰 must flow now
⏩In line with justice and #CBDR
⏩Public and new money
🛑Not through carbon markets, private finance, or insurance only 4/

A final COP27 statement, known as a cover decision, held the line on the aspirational goal of limiting global warming to 1.5°C from pre-industrial levels. Scientists say limiting warming to 1.5°C is a guardrail against catastrophic climate impacts, with the world currently way off track and heading for around 2.5°C under current commitments and plans.

It also included language on renewable energy for the first time, while reiterating previous calls to accelerate “efforts towards the phasedown of unabated coal power and phase-out of inefficient fossil fuel subsidies”.

But that failed to go much further than a similar decision from last year’s COP26 meeting in Glasgow on key issues around cutting planet-heating pollution.

"We haven't responded sufficiently…it has made Sharm El Sheikh a missed opportunity for a truly successful #COP27."

📢 @SPaeniu of #Tuvalu delivers a stirring speech at the closing plenary calling out world leaders on the lack of language to #PhaseOutFossils in the cover text. pic.twitter.com/J5pfUtDODY

As seen in the tweet above, Seve Paeniu, finance and climate minister from the island nation Tuvalu, described COP27 as “defining” due to the establishment of the loss and damage fund. But he highlighted that the COP wasn’t an “equal success” in terms of achieving the 1.5°C target. He also said the lack of commitments on phasing out fossil fuels, methane reduction and emissions targets was “regrettable”. Paeniu argued that overall the event was a “missed opportunity”.

Many campaigners also condemned governments’ failure to take the necessary action on a fossil fuel phaseout:

"There is no climate justice without human rights. We are not yet defeated. We will never be defeated." pic.twitter.com/RPCZFCr8bL

COP27 dragging to a close. The extended gaggle did not increase ambition. Loss & Damage promised but for a future date. At a time of civilizational crises the COP still drags its feet on the foundational need to phase OUT fossil fuels. Shame!@COP27P #Keepitintheground

German Foreign Minister Annalena Baerbock said that the emissions cuts and fossil fuel phase-out were “stonewalled by a number of large emitters and oil producers”.

Egyptian Foreign Minister Sameh Shoukry, the COP27 chair, defended his country’s steering of the negotiations. He said that any missteps were “certainly not intentional”, and that he worked to avoid any “backslide” by parties.

However, industries that profit from weaker climate action were out in force at the conference. As Truthout  reported, fossil fuel companies were even invited to take part in the official event program.

So, as with previous climate COPs, one giant misstep at COP27 is obvious to all, seemingly apart from government officials: vested interests were allowed too much influence at the event.

No wonder it’s done little to get our planet out of the emergency room.