Harry and Meghan are annoying millionaires in their own right, but they wind up the right people - Canary 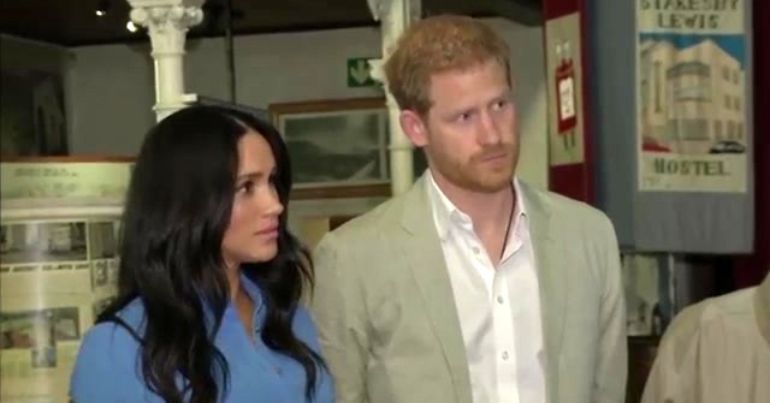 Love them or loathe them, Prince Harry and Meghan Markle wind up the right people. The celebrity millionaires have a new tell-all documentary out about their lives – and right-wingers are flocking to social media to air their discontent.

Naturally, the grumblers insist it has nothing to do with racism. But we can come to our own conclusion about that. They include such luminaries as Nigel Farage, who railed against what he claimed was their assertion that Brexit – which was famously fuelled by racism – was fuelled by racism.

Princess Diana’s former butler Paul Burrell, who made a career and personality out his former job, also decided it would go down well if he accused the couple of exploiting Diana’s memory. It went as you’d expect:

THE BUTLER DID IT: Paul Burrell has accused Harry and Meghan of 'exploiting' Diana.

Normally I'd make a witty comment here but I'm too busy laughing.

This from a man who wrote tawdry books about his time with the late princess:

Paul Burrell has accused Harry of exploiting Princess Diana for his new book. He hates exploitation of Princess Diana, as he explains in his book ‘A Royal Duty’ and his book ‘Remembering Diana’, although not in his book ‘In the Royal Manner’ which only mentions her on the cover! pic.twitter.com/dlXQJl7oPe

The mainstream press line that the couple wanted to destroy the Royals on the documentary was called into question. Unmentioned by the media – who have played a central role in maligning Harry and Meghan – was the fact that the documentary was highly critical of… them:

For a week we’ve been told that Harry and Meghan are trying to destroy the Royal Family with this documentary series, when it’s pretty clear 3 episodes in that they’re really trying to expose the British tabloid press. I’m not surprised to see “royal experts” trying to spin it.

Media commentator Mic Wright seemed to think the media’s problem was episode three of the documentary series, which attacked the scurrilous alliance between the press and the royal family:

It’s episode 3 of Meghan & Harry that will make the royal reporters most angry. It’s a direct — and justified — attack on the poisonous contract between the media and the monarchy.

Activist James Foster made a prescient point. Meghan-bashing tends to obscure lots of other issues, like the fact the country is on its knees because of decades of appalling governance:

Imagine if the hatred & vitriol being levelled at Meghan & Harry was instead redirected to the gross levels of inequality, the overwhelming levels of poverty, the homelessness, the racism, the corruption etc: we might actually see / get meaningful change.#HarryandMeghanNetflix

Radio journalist Shaun Keaveny said it was the age-old establishments, not trade unionists and rebellious princes, that we should be worrying about:

No surprise to see nearly all news outlets demonising train drivers, nurses, climate protesters and Harry and Meghan instead of centuries-old establishments that deliberately conspire to make all of our lives worse every day. We must fight these forces and we have to win. 🫡

There’s no doubt Harry and Meghan have been victims of the gutter press and the British establishment. And there’s even less doubt that this is fuelled by racism towards Markle. At the same time, there are far more pressing issues today than the internal battles of our ridiculous ruling family.

As seductive as the whole debate is, and despite how much airtime it gets, it is plummeting living standards, the climate crisis, and our increasingly authoritarian government that need our attention. Not the internecine squabbling of our posh overlords.

Featured image via Wikimedia Commons/ENCA on Youtube, cropped to 770 x 403, licenced under CC BY 3.0.