An FOI reveals the extent of complaints about social housing 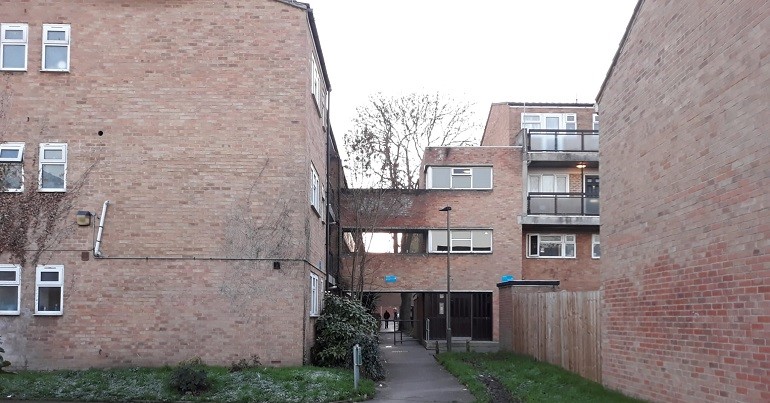 Complaints to a government watchdog over the state of social housing properties have increased since 2020. New data shows some housing associations are performing far worse than others. Meanwhile, people are dying, and the government is failing to act.

The death of two-year-old Awaab Ishak on the watch of Rochdale Boroughwide Homes’ (RBH’s) has thrust social housing back into the spotlight. Awaab died on 21 December 2020, after living in a flat infested with mould and damp. As the Canary‘s Steve Topple previously wrote:

The coroner ruled that Awaab died due to mould exposure that RBH failed to deal with. The housing association repeatedly ignored Awaab’s family’s desperate pleas for help. Since the coroner’s verdict, RBH has sacked its boss after he refused to resign.

The bottom line is this housing association committed what some people are saying is corporate manslaughter against him.

Awaab and his family’s situation was fuelled by RBH’s racism and classism. The problems with social and private rental housing are entrenched across the UK. As the Canary previously reported:

Now, a legal firm has gained access to figures which show the extent of social tenant complaints against some housing associations.

The Housing Ombudsman is the government’s social housing watchdog. It is the body tenants can go to to complain about housing associations. Now, data obtained by civil litigation experts CEL Solicitors via a Freedom of Information (FOI) request has revealed the scale of the problems in social housing. CEL has uncovered just how many complaints tenants made to the ombudsman between January 2020 and June 2022.

CEL said in a press release that:

London & Quadrant (L&Q) Housing Trust was the subject of 1,348 objections to the Housing Ombudsman Service between the start of 2020 and the end of June 2022. That puts the private company well ahead of its nearest rival Clarion Housing Group Limited, which racked up 885 complaint cases during the same period.

The solicitors said the data:

shows that complaints are set to more than double over the past three years – from 2,891 in 2020 to a projected figure of around 7,800 by the end of this year. But despite almost 13,000 being registered during that time, many of these private bodies are ignoring the plight of vulnerable people and leaving them to live with dangerous mould and serious structural issues. 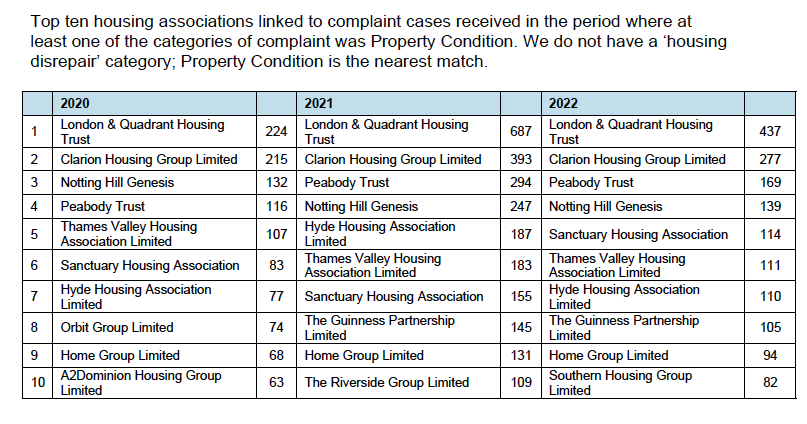 These figures are truly shocking and highlight the horrendous situation millions of people in the UK – one of the richest countries in the world – are being forced to live in.

They are also a rare glimpse into the state of property managed by housing associations, who are not compelled to share such information by law because they are private companies and not public bodies.

No-one should be forced to live in a house or flat that is infested by mould which can have serious health impacts, as we have seen in the heartbreaking case of Awaab Ishak.

But we are seeing more and more families reaching out for legal assistance as they feel it’s the only way they can get something done about these devastating scenarios.

Even then, housing associations as well as local authorities are often ignoring court orders to carry out repairs – we’ve seen cases where up to six breach orders have been needed to spark any action.

That is, social housing. This is despite over one million households waiting for social homes and the number of these type of properties constantly falling. Little wonder, then, that with no new properties being built, and with housing associations not maintaining the homes they do have, complaints to the ombudsman are up.

“The tip of the iceberg”

The worrying thing is these new figures are very much the tip of the iceberg.

Many vulnerable people living in appalling and dangerous housing conditions either don’t know who to complain to if the housing association is not listening to them, or simply don’t have the means to lodge an objection.

We see reports about the high salaries bosses at some of these organisations are being paid. It is therefore shocking to discover how the people relying on them for safe and habitable homes are being so very badly let down.

The Government needs to act on this growing crisis before any more tragedies occur.

However, the government clearly isn’t going to act. On 7 December it revealed it had watered down targets for local councils to build homes. Meanwhile, social housing is literally killing people like Awaab. Something needs to change, and quickly – however, it is unlikely to, any time soon. Social housing is, to many people, someone else’s problem or a system to be proud of. But for those of us living in it, it is invariably a grim and terrifying nightmare – one which should be a national scandal, but sadly won’t be.