Hunt is going to deregulate the city, and it will be disastrous 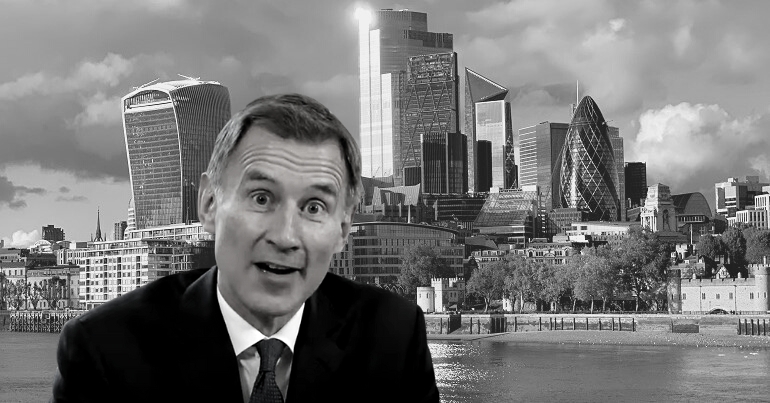 At the same time chancellor Jeremy Hunt announced the deregulation of the City of London, the financial watchdog fined a major UK bank over £100m for its weak rules around financial crime. This shows that the Tories cannot be trusted – and nor can bankers.

As Agence France-Presse (AFP) reported, on Friday 9 December Hunt unveiled post-Brexit plans to overhaul and preserve the UK’s financial services industry. He did this as he sought to boost a flagging economy facing recession. The chancellor outlined reforms which will, according to the Treasury:

Under the plans, Hunt will release banks without major investment activities from a ringfencing regime that currently seeks to separate retail and investment banking arms. He will give UK financial regulators a “new remit” to help deliver economic growth. A widespread review will see the Tory government repeal “hundreds of pages of EU law”, the Treasury added. As the Guardian reported, Hunt’s review has also looked at:

the so-called senior managers’ regime, which holds bosses personally and financially responsible for problems that occur on their watch

Predictably, people on social media are unimpressed. Many are pointing out that banking deregulation has gone so well in the past:

Deregulation of the City, that’s always a good idea isn’t it? We can trust them to behave responsibly can’t we, that’s never gone wrong before has it?

But Hunt’s plans have already been shown to be potentially disastrous. This is because, on the same day he announced them, the UK regulator fined a bank for its lack of safeguards around financial crime.

As AFP also reported, on 9 December the Financial Conduct Authority (FCA) hit the UK arm of Spanish banking giant Santander with a fine of almost £108m. This was after the FCA uncovered “serious and persistent gaps” in anti-money laundering controls. The FCA said in a statement that between December 2012 and October 2017, Santander UK plc had:

The failures affected more than 560,000 business customers. Santander did not dispute the findings. As such, it qualified for a 30% discount – otherwise, the FCA would have fined it nearly £154m. Mark Steward, FCA executive director of enforcement and market oversight, said:

Santander’s poor management of their AML systems and their inadequate attempts to address the problems created a prolonged and severe risk of money laundering and financial crime.

As part of our commitment to prevent and reduce financial crime, we continue to take action against firms which fail to operate proper anti-money laundering controls.

In response, Santander UK accepted the conclusions and apologised, adding that it had cooperated fully. The bank said it had also taken action to address the issues once they were identified. It added that its systems should have been stronger.

The point being, at the same time UK banks are already being exposed for not having followed the current rules around proper behaviour, Hunt wants to relax the rules even further. The UK banking sector is an industry that you can’t trust as far as you can throw it – perfect bedfellows with the Tories, really. Little wonder, then, that Hunt wants to give the sector even more free rein to do whatever it wants.

Featured image via GJ Marshy – Wikimedia, resized to 770×403 under licence CC BY-SA 4.0, and the Telegraph – YouTube