RMT to hold emergency demo over anti-strike law: all the details 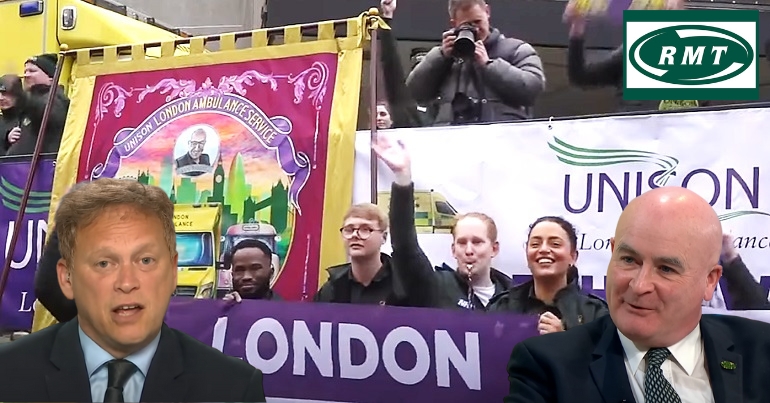 THIS ARTICLE WAS UPDATED AT 6PM ON THURSDAY 12 JANUARY TO REFLECT A CHANGE TO THE DEMO. THE RMT ARE NOW HOLDING AT AT 6PM ON MONDAY 16 JANUARY, OPPOSITE DOWNING STREET

The National Union of Rail, Maritime and Transport Workers (RMT) and its general secretary Mick Lynch have called an emergency protest. It’s over the Tory government’s authoritarian new anti-strike law – and will be happening on the day parliament debates the new bill.

The Tories are trying to push this new anti-strike law through parliament. It’s called the Strikes (Minimum Service Levels) Bill. The new law will force trade unions in certain industries to make sure some people work during strikes – defeating the object of industrial action entirely. The Tories call this “minimum services levels”. They’re mainly focusing on the emergency and transport services to begin with.

The law will force unions to give-in to what the government and/or employers say minimum service levels should be – depending on the sector. Business secretary Grant Shapps will be deciding what a minimum service level looks like for emergency and transport services. As the Canary previously reported, Lynch has already called Shapps “incompetent” – while we noted that he is an ‘all-round clusterfucker’. Shapps has not said what these minimum service levels will look like yet. However, Lynch pointed out that:

The government’s own impact assessment of minimum service levels shows it wouldn’t work.

Moreover, the Tories minimum service level nonsense ignores the fact that in sectors like rail and the NHS, minimum service isn’t even being met on non-strike days anyway:

The sharpest end of the Tories already brutal new law is that it gives bosses the option to sack workers who break it.  For example, if workers went on strike when the government claimed their industry hadn’t met the minimum service level, bosses would have the power to sack them. You know things are bad when almost everyone who is not right wing agrees something is dire (including Keir Starmer’s Labour Party) – and that’s the consensus on the bill. So, the RMT is taking emergency action.

RMT: not having it

The RMT has organised a demo opposite Downing Street on Monday 16 January:

It said in a statement:

This week the Government tabled legislation that launches a fundamental attack on our democratic and human rights to withdraw our labour. The Strikes (Minimum Service Levels) Bill will give the Secretary of State for Business the power to set Minimum Service Levels following “consultation” across six different sectors including Transport, Health, Fire and Rescue, Education, Nuclear and Border Security.

The second reading of this Bill takes place in Parliament on Monday 16th January and we are mobilising an emergency demo to send a clear message to Government that we will simply not accept this attack on our fundamental and democratic rights to strike.

The RMT’s demo is already gaining some support:

If you are uncomfortable with Rishi Sunak's proposal to whittle away workers' rights to take industrial action, join a union.

If you're a union member, encourage friends & family to join too.

Everybody out – to parliament on 16 January

Clearly, the Tories are not bringing in their new anti-strike law in isolation. It’s part of their wider crackdown on anything they see as getting in the way of the capitalist system’s interests – and therefore, by default, them and their rich mates. However, under Rishi Sunak, the Tory government is treading a very fine line at present. It is still way behind in opinion polls and generally the majority of the public seems to still support many of the ongoing strikes. So, this anti-strike law may be a step too far even for it – and with unions already mobilising to oppose it, it remains to be seen how far the bill will get.