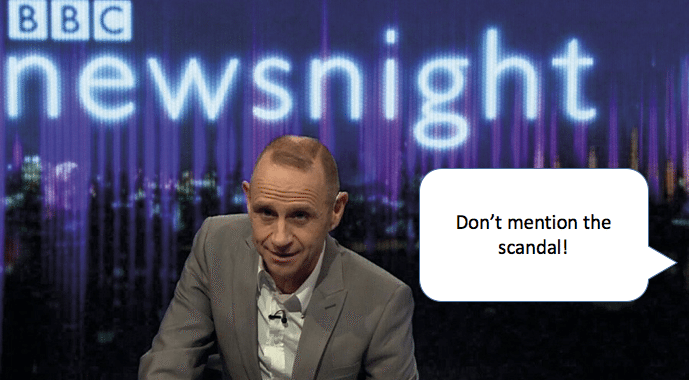 David Cameron’s Conservative government has become the first in UK history to be investigated by the police for electoral fraud. There is no bigger news story right now. Yet, on Monday night, the BBC’s flagship Newsnight programme decided to ignore the scandal entirely…and attack Labour leader Jeremy Corbyn instead.

The election fraud scandal presents the UK with the possibility of a constitutional crisis, and an illegitimate government. The stakes do not get higher. As James Wright reported for The Canary at the weekend:

Both Wiltshire and Avon & Somserset police have been granted crucial 12-month extensions in their investigations into the Conservative party’s alleged election fraud.

Meanwhile, Sussex police has begun its investigation and the Lancashire constabulary will be applying for a 12-month extension of its own.

Up to 19 police forces are now investigating Conservative MPs for their election expenses.

Since then, The Canary has produced several reports on the matter, including an exclusive interview with a whistleblower. These reports revealed yet further allegations which indicate the Conservatives may have won the 2015 general election by breaking the law.

While sterling efforts have been made by The Mirror and Channel 4 News to investigate and report upon the scandal – the BBC News and Current Affairs team has been noticeably mute. Aside from two particularly embarrassing asides on BBC Daily Politics and BBC This Week – both initiated by Andrew Neil, and with both sets of guests going to pieces – the BBC appears to have chosen to ignore the entire fiasco.

The silence hasn’t gone unnoticed, with many taking to social media to ask the BBC when it will begin to fulfill its role as public broadcaster and report on the scandal.

I wrote in 2013: "BBC is not transmitting an accurate account of reality."

This explains the deafening silence from the BBC mouthpiece on reporting the #toryelectionfraud https://t.co/nl0cJB6tWe Tell Everyone RT

#toryelectionfraud non-coverage has shown that BBC is a state PR agency NOT a public broadcaster. It deserves to die off

This story and this investigation have been kept alive by a staggeringly small number of media organisations, and mass public engagement. If there was ever a moment for the BBC’s News and Current Affairs team to stand up and be counted, it is right now. But so far, it is manifestly failing to do so.

The final straw for some came in the shape of Monday night’s Newsnight programme. Rather than taking on the allegations of corruption against the government, Newsnight chose to attack Labour leader Jeremy Corbyn instead.

At a moment when the UK Prime Minister is facing potential ouster under allegations of winning an election by fraud – Newsnight stuck to recycled conspiracy theories by bitter Blairites about the supposed unelectability of Jeremy Corbyn. The same Jeremy Corbyn who won the leadership vote with a bigger landslide than Tony Blair, then doubled the Labour party membership, and who now leads David Cameron in the polls while facing a unanimously hostile mainstream media. Whether you agree with Mr Corbyn’s policies or not – there is no denying his achievements in the last few months. Unless of course, you are a devastated Blairite. Sadly, the BBC chose once again to waste airtime on this that could have been devoted to serious journalism.

After a limp debate on the largely unwanted EU Referendum, and some speculative debate on Donald Trump’s possible foreign policy, came a segment called “What Labour needs to do to regain power.”

Host Evan Davis opens the piece with a brief reference to Tory division, before leaping straight to Labour.

“But what about Labour? Is it at the start of a long march back to Downing Street, or is it just a few steps from oblivion?” he asked, before introducing the launch of Labour Together – the latest Blairite pressure group to form in efforts to drag Corbyn to the right.

Davies introduces the group’s leader, Jon Cruddas MP as “Labour’s big thinker”, before moving into a montage of a younger Tony Blair, kissing babies and shaking hands while D:Ream’s ‘Things can only get better’ plays in the background.

There follows several excruciating minutes of pantomime. Cruddas pays brief lip service to bringing Labour together, before inviting Davies to slam the party over Europe, unity, and the assertion that Jeremy Corbyn will never be Prime Minister. No one bothered to ask the Dagenham MP and failed former deputy leadership contender Jon Cruddas what qualifies him to criticise the most heavily mandated Labour leader in history.

Not only was the story poor and inaccurate – it was boring. Compared to the quickfire developments in the Tory election fraud scandal, this was just idle gossip. Viewers appeared to feel short changed.

Hard to tell. Just the usual bashing. I rarely watch either. First time in months. They do Corbyn bashing every night. #newsnight

'The lab Party is aware of the weakness of jeremy Corbyn' says biased #newsnight. What like doubling the membership & increasing vote share?

The net result is the public feeling ever more isolated from the BBC at large, and less inclined to support the public broadcaster in its battles against a government committed to destroying it. The BBC’s News and Current Affairs output under former editor of The Times James Harding has been a dire mess of denial, misrepresentation and tedium. If the BBC wants the public to back it in the fight ahead, then it should be fighting on behalf of the public now. The BBC should be front and centre in these investigations, taking the skills and talents of its rank and file journalists and applying them to the most important piece of investigative journalism in a century. Instead, it stands gossiping about trivia with its corporate media peers – while leaving others to take the risk and do the work. This will not be forgotten. For goodness’ sake BBC, wake up and smell the scandal.

– If you worked for or were called by a company conducting polling on behalf of the Conservative party in the lead up to the 2015 general election and you have information you’d like to share, please get in touch.
– Ask David Cameron to respond to the allegations in this article.
– Use The Mirror’s ‘People’s Electoral Commission‘ to help investigate alleged Conservative election fraud.
– You can report any concerns you have about electoral fraud anonymously here.