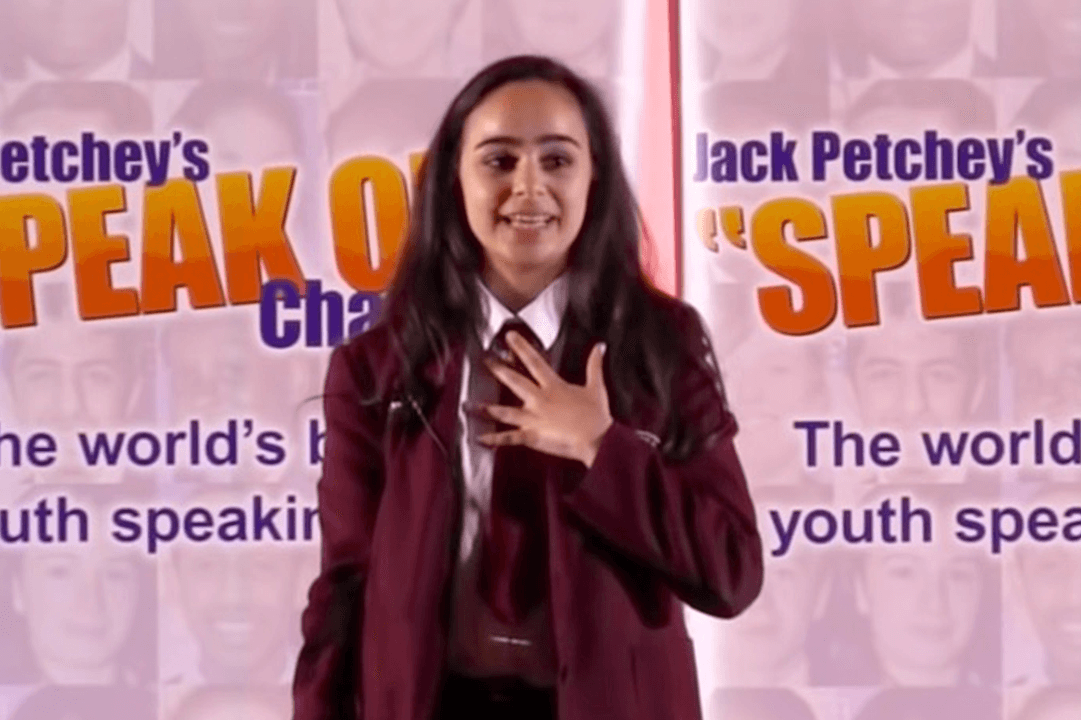 A London schoolgirl has been denied a place in the final of a national public speaking competition after her entry on the subject of Palestine caused a furious backlash on social media and in the press.

Leanne Mohamad of Wanstead High School participated in the renowned Jack Petchey Speak Out Challenge. She won a regional final of the competition, after which her uploaded speech went viral.

However, complaints were made about the speech following her win, and in the judges’ deliberations on which of the regional finalists should enter the grand final, Mohamad was not selected.

Many reports alleged the 15-year-old student had been deemed unsuitable because her speech breached two rules of the contest. According to the Jewish Chronicle Julie Holness, CEO of the Speakers Trust which organises the contest, explained:

There are two fundamental rules that are made explicit during the training: the speech must have a positive and uplifting message – in fact this is one of the core terms of the agreement with the Jack Petchey Foundation [and] a speaker should never inflame or offend the audience or insult others and this, by definition, means that propaganda is ruled out absolutely from the outset.

But Holness sought to clarify the reasoning behind the rejection in an interview with Middle East Eye:

Our concerns were whether it was upbeat enough and whether it was potentially inflammatory, but it was absolutely not disqualified for those reasons.

And the statement from the Speakers Trust on its website also denies that the uproar over the speech had anything to do with the choice of finalists:

A panel of judges selected the top 15 speeches without any external influence or input and prior to any of the issues that emerged this weekend.

If the Speakers Trust were not in any way affected by the reactions to Mohamad’s “birds not bombs” speech, it would be very surprising. The accusations thrown at her were that she had created what amounted to “an ISIS recruiting video“:

Some claimed that her arguments “were lies, blood libels, and full of Jew hatred and hatred towards the State of Israel.” The Speakers Trust allege they were forced into taking down her video from its website to protect the student from the “vile and hateful” comments posted there. She was also attacked on Twitter:

Because your talk was a pack of lies and blood libels about the Jewish State. Good ISIS recruitment video though…

She was commended, and defended, by many other Twitter users, and has subsequently contacted the police over the matter.

The speech focused on her understanding of the discrimination against the Palestinians by the current Israeli state since its creation in 1948. As we have detailed at The Canary before such discrimination is no fallacy. Indeed, well respected scholars like Noam Chomsky,  Ilan Pappé, and Norman Finkelstein have dedicated much of their lives to documenting the Palestinian plight, and discussing the possible pathways to peace.

But as we have previously noted, in the UK there has been a renewed effort of late to conflate criticism of Israeli policy and actions with anti-semitism. In fact, Israel’s Justice Minister Ayelet Shaked explicitly stated an assertion that they are one and the same in a recent interview with The Washington Post:

In the past, we saw European leaders speaking against the Jews. Now, we see them speaking against Israel. It is the same anti-Semitism of blood libels, spreading lies, distorting reality and brainwashing people into hating Israel and the Jews

This is the same minister who essentially called for the genocide of all Palestinians in a Facebook post, and received thousands of likes for the suggestion.

Her statement about what constitutes anti-semitism has been challenged by the Anti-Defamation League (ADL), who said:

Certainly the sovereign State of Israel and its government can be legitimately criticized just like any other country or government in the world. Criticism of particular Israeli actions or policies – even harsh and strident criticism and advocacy – in and of itself does not constitute anti-Semitism.

But the conflation creates the risk that legitimate criticism of Israel is silenced. And as we see from Mohamad’s example, this suppression may have already reached our classrooms.

The furore over the handling of this particular case has ensured that Mohamad’s views have gained traction. But other students may not end up with the same result. The inability to debate, discuss and decipher the truth of any given situation severely inhibits educational progress and critical thinking. Such constraints will not lead to a nation of informed adults.

That’s why this sort of stifling has no place in our education system. Nor should it in the world at large.

Read more about the importance of free speech from Liberty.

Support The Canary in the work we do.