This is what happens in Israel, but we're encouraged not to criticise (VIDEO) - The Canary 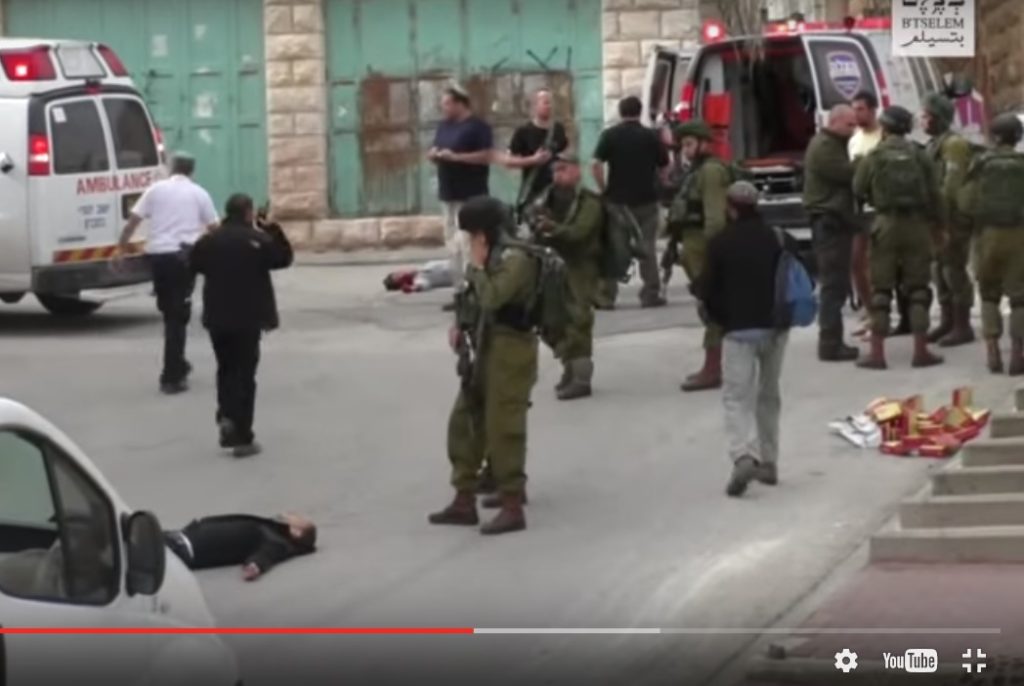 The British media has given little attention to the ongoing violence and oppression in Israel and Palestine – a long-standing humanitarian crisis in desperate need of a permanent resolution. This may be a result of the fact that, whenever Israel is criticised, cheerleaders for the state try to slander their opponents as anti-semites. But newly released video footage reminds us exactly why we should never shy away from criticising Israeli violations of human rights.

In May, international human rights groups sent reports to the UN about the continued torture of Palestinians in East Jerusalem, the West Bank and the Gaza Strip. But Israeli human rights group B’Tselem has insisted that torture is not the only problem. Today, it insists, the Israeli state has transformed police officers and armed civilians “into judges and executioners” by allowing them to kill Palestinians suspected of armed attacks without trial. Amnesty International has called for Israel to bring this “pattern of unlawful killings” to an end.

Still, such extrajudicial executions occur regularly in Israel. In March, an Israeli soldier shot a 21-year-old Palestinian in the head while he was lying wounded on the ground. Rights groups and liberal Israelis immediately condemned the act, but the soldier in question received significant popular support and was only charged with “manslaughter and inappropriate military conduct”.

The following footage from Israel’s Channel Two is thought to show the aftermath of this execution, in which a knife is kicked towards the Palestinian’s body. Voices are also heard calling for this to happen, but it isn’t clear who moves the knife. While it is difficult to confirm the reason for kicking the knife towards his body, some commentators have suggested that soldiers may have tried to plant the weapon next to the corpse in order to justify the execution.

The footage above appears to show the aftermath of the execution shown in the video below, which was filmed by a B’Tselem activist.

The graphic scenes in this video may upset some readers.

At The Canary, we have explained very clearly why criticising the fascist tendencies of the Israeli state is both a legitimate and an urgent task today. We have also slammed media bias and taken a stand against attempts to silence political opposition to Israel’s crimes. On 1 June, we wrote an article defending a London schoolgirl whose speech criticising Israeli discrimination against Palestinians led to horrific abuse on social media and in the press. We have made it clear that such attacks are only a small part of renewed efforts in the UK to conflate criticism of Israeli policies and actions with antisemitism, and that such a conflation threatens to silence all legitimate criticism.

Even Haaretz, Israel’s oldest daily newspaper, has claimed the country is on the “path to becoming [a] failed state” and that the word apartheid correctly describes the current situation there. Renowned Jewish scholar Noam Chomsky has gone further, insisting that Israeli actions in Palestine are in fact “much worse than apartheid” was in South Africa.

The greatest threat to Israel is not and never has been international criticism or Palestinian resistance. The greatest threat to Israel is the ideology at its heart. Nationalists (or Zionists, in this case) are committed to building and maintaining a completely Jewish state – a divisive aim (opposed by orthodox Jews, Jewish writers, and Jewish academics around the world) which encourages ethnic cleansing, violence and segregation. The rising presence of institutional fascism in a territory which has been a religious and ethnic melting pot for thousands of years is a direct result of this toxic ideology.

For peace in the region (and throughout the world), all citizens must be treated equally regardless of their ethnicity, religion, or political views. That is a position that we at The Canary will never shy away from.