The media closes ranks to protect the BBC's Laura Kuenssberg, but the public aren't buying it - Canary

The mainstream media has closed ranks to protect the BBC’s Political Editor, Laura Kuenssberg, but the public aren’t falling for it.

On Thursday, Labour supporters who contribute to Kuenssberg’s wages (through the TV licence fee) expressed criticism of her biased coverage by booing and hissing when she began to ask Jeremy Corbyn a question:

The BBC's Laura Kuenssberg is booed and hissed at by Jeremy Corbyn's supporters as she attempts to ask a questionhttps://t.co/wzfxtCyhuP

There has since been wall-to-wall media coverage condemning the Labour supporters and protecting Kuenssberg from criticism: 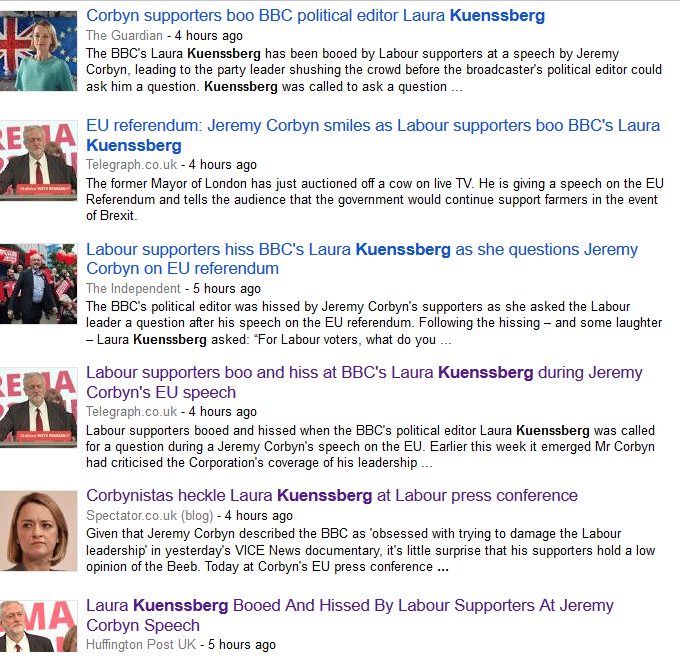 But it’s not just Corbyn supporters who are critical of Kuenssberg’s coverage. Former Political Editor Nick Robinson confessed he was shocked by the BBC’s anti-Corbyn coverage of the Labour leadership election in 2015, to the point where he wrote to BBC colleagues about the matter. Former BBC chairman Sir Michael Lyons has since echoed Robinson’s concerns:

I don’t think I’m alone in feeling that the BBC has sought to hedge its bets of late. There have been some quite extraordinary attacks on the elected leader of the Labour party, quite extraordinary. I can understand why people are worried about whether some of the most senior editorial voices in the BBC have lost their impartiality on this.

Criticism of Kuenssberg and the BBC’s political coverage is entirely legitimate. The bias stems from a number of issues:

And the manifestation of these fundamental issues is very clear to social media users:

And indeed, there was widespread criticism of the BBC’s ‘woeful’ coverage of the local elections.

Back in January, meanwhile, a Kuenssberg segment on BBC News at 10 felt like a party political broadcast for the Tories. Her coverage of Corbyn’s reshuffle was particularly partisan:

But now, the media has closed ranks to protect the BBC being held to account by the very people who pay the licence fee and expect a rational level of impartial coverage rather than targeted Corbyn-bashing.

One Twitter user tried to put themselves into the mindset of the mainstream media:

How dare these people speak out of turn, express any criticism of Laura Kuenssberg or any public figure; don't they know their place? RT

Omitting the legitimate concerns of licence fee payers and apparently eager for negative coverage of Corbyn, the Guardian got caught blowing the story out of all proportion. And this didn’t go unnoticed:

Dear @guardian: your headline is disproven by the video you posted right underneath it https://t.co/uzUnJ1INSh pic.twitter.com/KycOBVgvuz

The reality, as Greenwald pointed out, was that Kuenssberg wasn’t prevented from asking a question. She was simply stopped for five seconds.

Meanwhile, ITV was caught quoting itself in order to authenticate its anti-Corbyn headline:

Look at this ridiculous headline, then look at the source Tweet (ITV journo): ITV is literally quoting itself https://t.co/7NmycZ8bRj

From smearing supporters of a petition calling for Kuenssberg to be dismissed as sexist to deflecting public criticism of her, the media has clearly endeavored to protect the journalist from accountability.

But the public really aren’t buying it:

Laura Kuenssberg booed is a scandal but daily murder of #Kurds is just fine for supine British media.

When I saw the journo Twitter outrage over this, I expected menacing behavior. WATCH VIDEO: https://t.co/uzUnJ1INSh https://t.co/V6Z10dhwMH

REALITY: That lovely Jeremy Corbyn stuck up for unpopular BBC hack Laura Kuenssberg when some people booed her. https://t.co/FshloeyEhy

The BBC has a duty to its licence fee payers to remain impartial. And therefore members of the public are perfectly entitled to hold Kuenssberg to account when there are so many counts of bias.