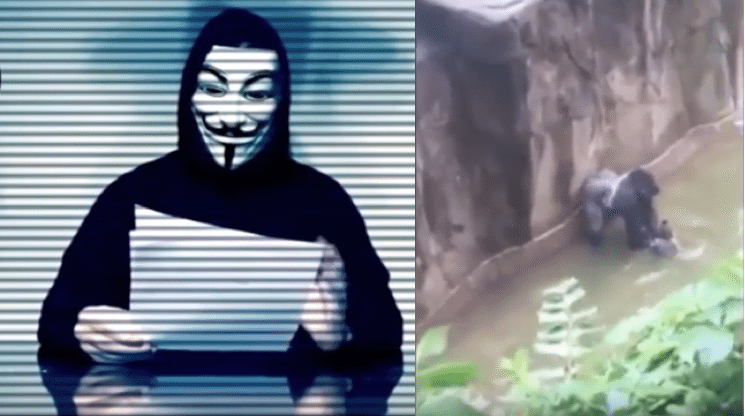 A sect of online hacktivist network Anonymous has declared war on the mother of a toddler who fell into a gorilla enclosure at Cincinnati zoo.

17-year-old Harambe the gorilla was shot by zoo keepers after the son of Michelle Gregg managed to find his way into the enclosure. The death created widespread upset which has transformed into a dangerously venomous attack on the child’s mother – who had several other children present, including a baby in her arms. In a post to Facebook, eyewitness Deirdre Lykins defended Gregg, stating that this was a “tragic accident”. She said:

“This was an accident! A terrible accident, but just that!

“None of us actually thought he’d go over the nearly 15 foot drop, but he was crawling so fast through the bushes before myself or husband could grab him, he went over,”

“The crowd got a little frantic and the mother was calling for her son.

“Actually, just prior to him going over, but she couldn’t see him crawling through the bushes.”

But this hasn’t stopped keyboard warriors and columnists the world over from laying into the mother as an unfit parent. Now hackers linked to Anonymous have joined that sorry assault.

In a video released online, an activist from the collective says:

“Dear citizens of the world, as you may have heard an endangered silverback gorilla, Harambe, was killed this week after a woman, Michelle Gregg, neglected to supervise her children.

“We do not see Michelle Gregg as a fit parent. We are calling on an investigation of Michelle Gregg and the zoo. We believe she should be charged in the death of an endangered animal.

“We are encouraging every able-bodied person watching this video to participate. #OpHarambe engage.”

The killing of Harambe raises serious questions that we should be asking:

What failures in security at the zoo enabled a toddler to enter this enclosure?

Did Harambe really need to be killed?

Should we be keeping creatures in zoos at all?

How can we better sustain the environment and natural habitats of our fellow animals?

And these are just a few of the questions we could and should be asking in the wake of this awful incident. But a personal assault on the mother? No.

Anyone with children, or who has spent any time responsible for children, knows that they can disappear in the blink of an eye. We would all like to tell ourselves this would never happen on our watch – but the truth is, it can and it does. Perhaps the reality of that precariousness, the limits on our ability to protect the most precious beings in our lives, is simply too much to bear for some. So people create a myth that they have a level of control over the fate of their children that in reality, none of us truly ever can. Then instead of facing the gut-wrenching terror that moments like these can provoke in our hearts, we feel anger instead.

Perhaps. But it has to stop.

Michelle Gregg has suffered the excruciating horror of seeing her child in extreme risk, and the shame of public ridicule and venom. She has suffered more than enough for the crime of looking in the wrong direction for this one moment in her life.

Tragic accidents happen, and this is one of them. The pitchfork brigades marching on this mother will not answer any of the most important questions raised by this tragedy. It will only bring more pain and discord and move us further from a solution than toward one. We can love Harambe, cry for his loss, share our grief and our hopes for the future – all without losing our humanity in the process. So let’s do that.