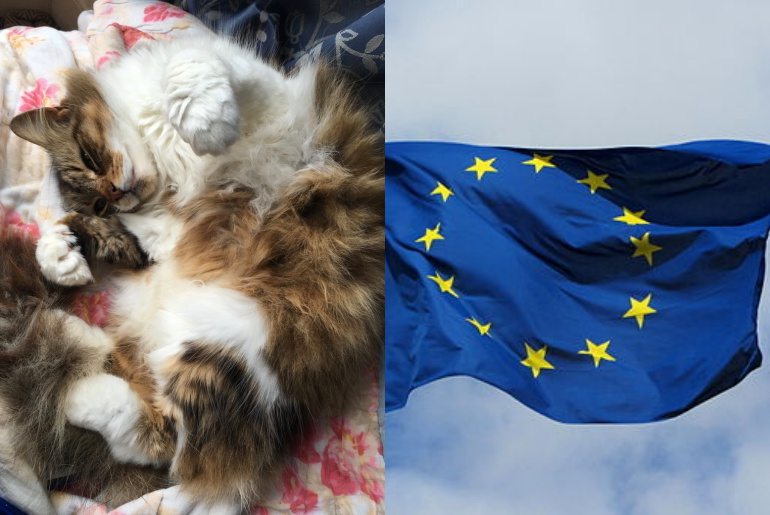 The campaign for and against Britain leaving the EU has been a gruelling one. There have been lies and discredited statements on all sides.

With just days to go before votes are cast, it has been refreshing to see a lighter side of the debate emerge, with pet owners taking over Twitter to voice their opinions. The hashtag, #catsagainstbrexit was soon trending:

Lola has read up on why it's so wrong to scapegoat migrants in the referendum debate #CatsAgainstBrexit pic.twitter.com/mt7EDGmdw3

Sasha is worried for her future after #Brexit as she knows she looks ‘foreign’. #CatsAgainstBrexit pic.twitter.com/70vnbKYcXc

My cat is sad because if the UK leaves the EU hus favourite vet might have to leave the country #catsagainstbrexit pic.twitter.com/IhtZjsIdFe

However, not to be outdone, dog owners also got in on the act with the hashtag #dogsforbrexit:

Scraps didn't enjoy seeing his masters tax money be used on pro-eu propaganda, he just ripped it up. #DogsforBrexit pic.twitter.com/OhMFjERWkR

As an English springer spaniel i'm sick of German shepherds bossing me around. #DogsforBrexit pic.twitter.com/v8UQYGeJ2J

There were also pets who had yet to make up their mind:

Harry is still on the fence and has a paw in both camps#CatsForBrexit#CatsAgainstBrexit pic.twitter.com/mqyxZLCDTd

Whilst the majority of the tweets have serious political messages, they have brought an element of humour to the campaign which many people didn’t think was possible:

just discovered #CatsAgainstBrexit and #DogsforBrexit both give me hope we can restore our civility, and sense of proportion

And this is surely the point. The referendum debate has been a toxic one – one which has made if feel as though this is a divided country. Injecting some lightheartedness into the discussion is needed, and does give hope that after Thursday’s vote there might be a way forward.

On too many occasions, this has felt like a debate amongst elites. It is supposed to be a referendum of the people, but the people’s interests have been confused with the competing interests of the ruling class and power plays for the Tory leadership.

However, the power of social media has allowed the people to reclaim the debate on their own terms and with a much-needed injection of humour.

Some may argue that this is debasing all the arguments, but given the politicians have done such a good job of that for us, resorting to dogs and cats may be the most sensible response we have seen in the whole campaign.

Featured image via Wikimedia and author’s own.