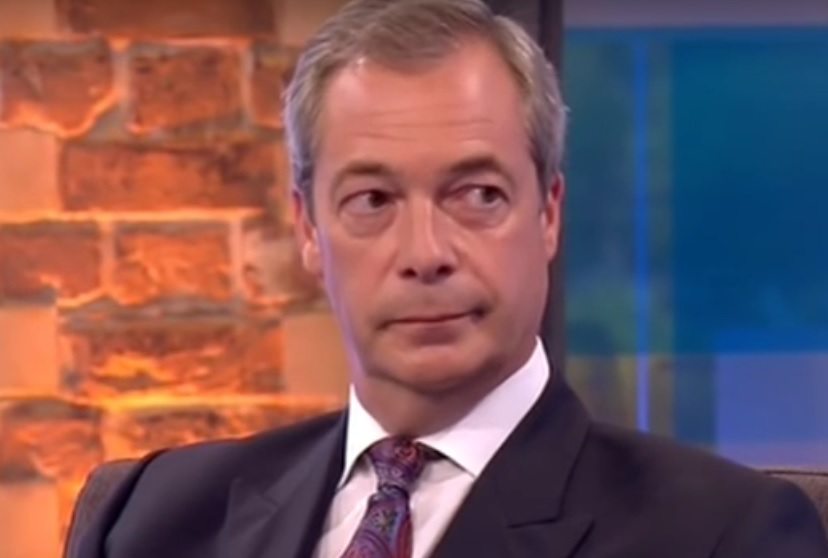 Speaking on ITV’s Peston on Sunday on 19 June, UKIP leader Nigel Farage claimed he was the victim of establishment propaganda during the EU referendum debate. This in spite of the fact that, just days ago, the prominent Brexit campaigner was accused of emulating Nazi propaganda in his most recent bout of anti-migrant fearmongering.

Robert Peston, who is also the Political Editor of ITV News, spoke on his programme about how the recent murder of Labour MP Jo Cox had “prompted a debate about whether there is too much hatred in politcal life”. Addressing Farage, he said:

And you know, many people say that you are a politician who stokes up hatred

This comment came in the context of a recent UKIP poster which was reported to the police for stirring up racist sentiment against refugees fleeing war in the Middle East.

But Farage did not apologise for ‘stoking up hatred’. Instead, he told Peston:

I think I’m a politician who’s been a victim of it to be honest with you.

When you challenge the establishment in this country they come after you, they call you all sorts of things.

And while criticism of ‘the establishment’ is often completely justified, Farage here was very clearly deflecting focus away from the role he and his party have played in encouraging hatred against non-European refugees in recent months and years.

Is violence the next step?

In May, Farage said:

While the UKIP leader was not directly inciting violence with this comment, questions still remain over how much his party’s fearmongering has contributed to an environment of increasing racism in Britain today.

Murdered MP Jo Cox was due to launch a report and video on June 29 on rising Islamophobia and right-wing nationalism. She was working with Tell Mama, a charity monitoring anti-Muslim attacks in the UK which has warned of an increase in such incidents in the last year.

On 19 June, former UKIP candidate Lee Harris said Cox’s ideology had been “cancerous to this nation”.

Nigel Farage and his party are not victims of a vicious campaign of establishment propaganda, as they would like us to believe. They are recipients of completely legitimate criticism as a result of their constant campaigns of division and hatred. And as long as these continue, so will the legitimate criticism.

– Write to your MP and the Prime Minister to ask them to take steps to eradicate hatred and intolerance from British politics.

– See other Canary articles on Brexit, Islamophobia, and racism.