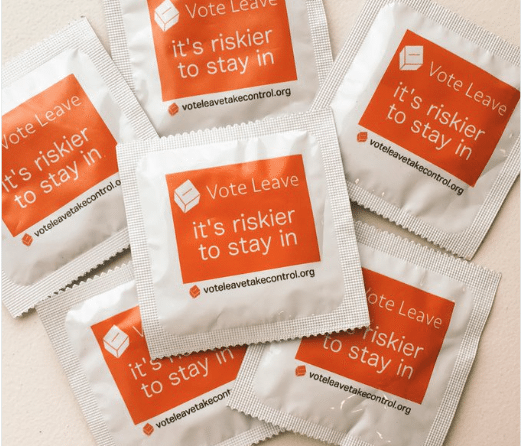 The EU Referendum hasn’t been a shining example of British democracy at its finest. Facts have been made second to opinion, both camps have focused on scaremongering and divisive tactics. The whole thing is likely to leave a fairly bitter mood in its wake. But just when you thought things could hit no lower ebb, the Leave and Remain camps take their campaigns to the bedroom – with branded condoms.

Be on the look out for our special new campaign materials!
Remember: safety first pic.twitter.com/K4n8h8HCFS

The condoms have at least given a fairly shattered and miffed electorate a chance to have a little giggle, since they first showed up in February.

Hey guys, just found out the Vote Leave campaign have made condoms and became even more of a lesbian 👍🏻 pic.twitter.com/clsu6Cqgs2

If not seen one person point out the fundamental flaw with those #VoteLeave condoms. YOU DONT NEED TO PULL OUT YOU'RE WEARING A CONDOM!

According to the majority of polls, the vote is still looking pretty much even going into the vote on Thursday. Perhaps it’s worth keeping a few behind in case of bad news?