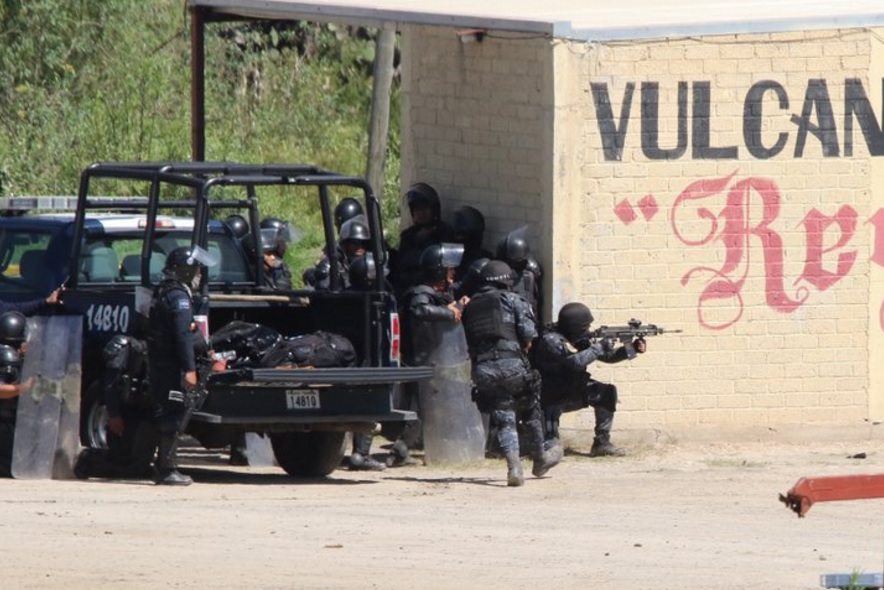 On 19 June, police opened fire on citizens in the southern Mexican state of Oaxaca. At least twelve people were shot dead. But these weren’t criminals or drug cartels. They were protesters campaigning against the imposition of unpopular education reforms.

The National Coordinator of Education Workers (CNTE) had set up a road blockade on a prominent road in Nochixtlán, Oaxaca. It was protesting against government measures aimed at privatising Mexico’s education system and reducing the independence of the teaching profession.

As police officers moved in to clear the blockade, gunfire triggered around four hours of clashes. The authorities first declared that they hadn’t been armed, but when videos emerged showing that they were, they said they had armed themselves because protesters had begun to fire at them. There is currently no evidence to prove this is true.

There is, however, video evidence of armed police firing on protesters. And Associated Press journalists apparently bore witness to this.

The CNTE has claimed that two trainee teachers were among those killed in the attack. One CNTE representative in Oaxaca said of the police:

On 20 June, the current Governor of Oaxaca revealed the names of six people who had died. They included two local businessmen, a teenage student, a farmer, a health worker, and zero police officers. At least two more protesters were killed in attacks elsewhere in Oaxaca.

The CNTE released a statement soon after the event slamming what they considered to be “state terrorism” aimed at defeating its movement.

Journalist Jorge A. Pérez shared the following video on Twitter:

For decades, the CNTE has firmly opposed Mexico’s embrace of policies like privatisation and financial deregulation. And it has faced more than its share of oppression in the process.

In 2006, the Oaxaca government tried to evict striking teachers from an encampment by force. Hundreds of thousands of locals came out in support of the teaching professionals, and for seven months social organisations took control of Oaxaca City, in what would soon be dubbed the Oaxaca Commune. State authorities only retook control through a violent campaign of assassinations and ‘disappearances’.

Since 2013, the CNTE has opposed a new set of government ‘reforms’ (supported by Mexico’s wealthiest citizens and international capitalist organisations). These seek to impose evaluations on teachers which have been criticised for their ineffectiveness and for encouraging mass layoffs. They also seek to scrap teacher training colleges, which have traditionally been key in the development of social justice movements. 43 students from one of these schools ‘disappeared’ in 2014 with the alleged involvement of high-level state officials.

When I met a group of these teachers in 2013, they emphasised that they were simply fighting for their working rights and to maintain a free and independent education system. Three years on, their resistance continues, and their most recent strike is now in its second month.

The government has tried a number of measures to silence the dissenting teachers. In 2015, it froze the CNTE’s bank accounts, and even those of its officers. And in May 2016, it took the unprecedented measure of firing 3,000 teachers for going on strike.

Since the start of June, several union leaders have been arrested on trumped-up charges. According to Luis Hernández Navarro, a former teacher who now works for Mexico’s La Jornada newspaper, the imprisoned leaders are “hostages of the federal government”.

Mexican President Enrique Peña Nieto announced on 11 June that he would only enter into dialogue with the CNTE if it agreed to stop striking and accept the government’s reforms. In other words, it would have to accept defeat before even entering into negotiations.

On 14 June, the government insisted it was prepared to repress striking teachers and their sympathisers by force. The events of 19 June were proof that it was not bluffing.

The government’s strategy is to swap dissident teachers for docile ones.

If they take away the real teachers, what will we be left with?

But the CNTE is not alone in its struggle. The UN High Commissioner for Human Rights called on 21 June for Mexican authorities to “avoid violence” and “favor dialogue over confrontation in order to prevent a repeat of the situations that occurred”. Days before, hundreds of academic and human rights organisations from around the world condemned the government’s campaign of “brutal repression” of teachers in an open letter. And on 18 June, over 14,000 people marched in Mexico City in support of the education professionals, while the popular Zapatista movement insisted that support for the CNTE’s cause is growing day by day.

The fact that the Mexican government is increasingly turning to violence in its battle against the CNTE and its supporters shows, if anything, that its desperation is growing. As time passes, it is dropping its democratic façade more and more often, violating human rights and the rule of law in the interests of pushing through its unpopular ‘reforms’.

But the regime has its international reputation to think about. And if the world gets behind the teachers, the government may just back down.

– Write to your MP and David Cameron to ask them to pass your concerns about current events onto their Mexican counterparts.

– On 5 June, state elections in Oaxaca saw the PRI (the party of the current president) return to power after six years in opposition (with the support of less than 20% of eligible voters). When the party officially takes power in five months’ time, repression of the CNTE and other organisations is likely to intensify. If you are planning to go on holiday to Mexico, you could show solidarity with the country’s teachers by cancelling those plans in protest at the government’s violent repression.