The Sun has this final message for you ahead of the EU vote, and it's f***ing hilarious (IMAGE) - The Canary 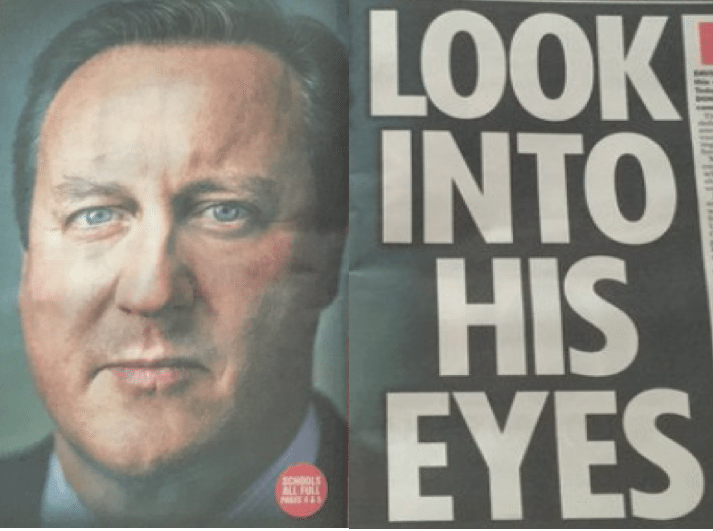 The last ditch battles are being played out as the UK enters the final hours before the EU Referendum vote. The rabidly eurosceptic Sun has gone out on a high, with a final message which is – entirely un-intentionally – absolutely f***ing hilarious.

This is the page in @thesun that freaked US pundits here to cover #euref
Passed it around like a specimen.#Remainpic.twitter.com/5X675c3C0a

The invitation to ‘look into his eyes’ brings to mind a very unfortunate comparison, in the Little Britain sketch about a hypnotist called Kenny Craig.

Once again, Rupert Murdoch’s news team goes full throttle on Project Fear, and doesn’t bother to even point to the elephant in the room: that this referendum is a sham.

As The Canary reported in an editorial this week, there are many perfectly good reasons to Vote Leave. It’s totally reasonable to want to rebel against the crushing bureaucracy, neoliberal economic orthodoxy, and impending  TTIP– that comes with our membership of the EU.

But in the absence of a general election, there is no chance of a Lexit (left wing exit) whatsoever. This leaves an entire swathe of left-wing eurosceptics with a truly horrible choice. First, they can vote to remain in an EU that has become so anti-democratic that it deposed the democratically elected leaders of Greece and Italy in order to push through its economic and political agenda. Second, they can vote to leave on the terms of a UK government to the right of that anti-democratic institution. This means, whether they like it or not, they are voting to lose key civil, human and workers’ rights, to accelerate a TTIP-style trade deal, to see British science, technology and engineering take a massive hit, and see any resulting recession become the pretext for austerity on steroids.