This leaflet shows everything that's wrong with the referendum debate - Canary 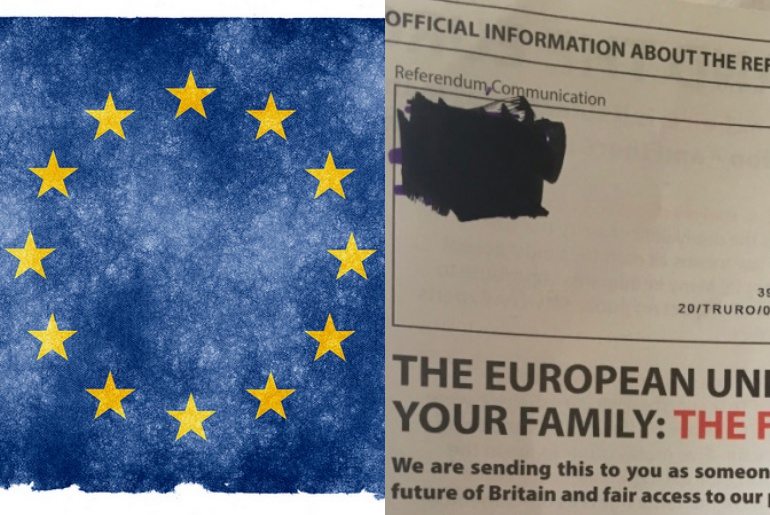 A leaflet being posted to voters by the Vote Leave campaign has attracted criticism for misleading voters.

Firstly, the front of the leaflet makes no mention of the fact it’s an official Leave campaign flyer. Instead, emblazoned across the top are the words “Official information about the referendum on 23 June 2016”. There is then the heading in large capitals, “The European Union and Your Family: The Facts” with the following quote:

We are sending this to you as someone who cares about the future of Britain and fair access to our public services.

This document is to help you make your decision in the referendum on Thursday 23 June.

There are then two “facts”:

Fact: Britain’s official bill for the EU membership is £19 billion per year or £350 million a week – the cost of a new hospital. You have to decide whether what we get back from the EU is worth it.

Fact: Five new countries are in the queue to join the EU – Albania, Macedonia, Montenegro, Serbia, Turkey. You have to decide whether this will help Britain, Europe and fair access to public services.

The front of the leaflet finishes with:

The BBC says that ‘Leave’ supporters are much more likely to vote than ‘Remain’ supporters because few are happy with the EU. It is important that people vote in this crucial referendum whatever their view.

Just to reiterate – there are no mentions of this being an official Leave leaflet on the front page – this is couched as a neutral “official” leaflet – whilst skewing the “facts” towards the Leave agenda.

This is the front of the leaflet: 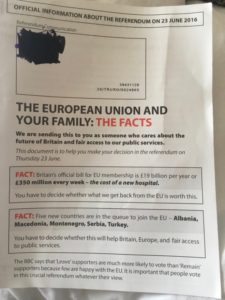 There is no denying that both sides have manipulated facts and figures in this debate, and it has been hard to actually have a discussion based on any level of truth. However, the two “facts” on the front of this leaflet have been widely discredited.

Firstly, the £350 million a week figure. This figure has been so widely debunked that it’s getting beyond ridiculous that it’s still being used. This is the figure the UK pays without the rebate it also receives. According to the UK Statistics Authority, this is “not an amount of money that the UK pays to the EU each year”. The correct figure, taking into account the rebate is £250 million.

Then there is the question of, regardless of the figure used, whether this would actually pay for a new hospital. The leaflet doesn’t make clear what this means – whether it would pay for just the construction, or the upkeep and staffing. The election broadcast goes further – as does the back of the leaflet –  and says this could pay for “a brand new hospital every week”.

However, this is just as much an ambiguous claim. Yes, if there is a Brexit, some of the money might go back into the NHS, but certainly not all of it will, and certainly not enough to build a hospital a week. Furthermore, with a pro-privatisation government, it is likely that any new hospitals could be under a Private Finance Initiative (PFI). In 2005, these PFI hospitals were costing £3,700 every minute.

Secondly, there’s the claim about the countries in the queue to join the EU – Albania, Macedonia, Montenegro, Serbia, and Turkey. These may be countries wanting to join the EU, but they are a long way from joining and being full members.

The most important point to make before going into the details is that each member of the EU has a veto on new countries joining – so it’s far from a foregone conclusion that any of these countries will ever join.

David Cameron has certainly downplayed, if not lied about his support for Turkey joining the EU. However, Turkey applied to join in 1987 and has only completed one out of 35 negotiations needed for membership. According to Full Fact, whilst it’s not untrue to say that Turkey might join the EU at some stage, it’s not likely in the immediate future:

So it’s reasonable to say Turkey won’t join the EU any time soon. But the referendum decision isn’t time limited and saying that it’s “completely untrue” to talk about Turkey joining the EU at any stage is going too far.

The same is true of the other countries listed on the leaflet. The countries have been confirmed as candidates for the EU – Macedonia was confirmed as a candidate back in 2005. But none of them would be due to join until at least 2020, and most have a range of measures they need to implement to tackle organised crime and corruption before their applications could be successful. And, even if they get that far, remember there’s still the veto that each member state has.

The back of the leaflet:

Whilst the back of the leaflet at least shows that it is from the Vote Leave campaign, they repeat the disingenuous, to say the least, figure of £350 million and the “new NHS hospital every week” claim. They do, finally, admit, that we get some of this money back:

We get less than half of this back, and have no say over how it’s spent.

However, possibly the most misleading piece of information on the back is a map of Europe that has the countries listed above numbered in red, with the only places marked being Syria and Iraq. 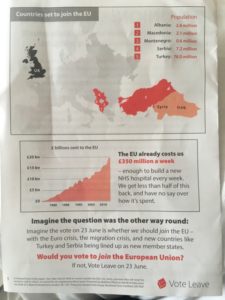 This is presumably of letting us know the dangers of letting in these new countries to the EU, which, as already established, are either a long way away, or not likely to happen. However, presenting this map in this way, with no other countries in Europe named, is scaremongering and manipulative.

This leaflet is at least one step better than a previous one, which was reported to the Electoral Commission because it had no direct references to it being a Leave publication. However, the lack of information about the political stance on the front could easily allow a casual reader to believe that they had received a neutral information leaflet. This is very cynical and manipulative behaviour.

The referendum campaign could have been a chance for direct democracy to flourish. Instead, there have been lies, misdirections, and manipulations from all sides. Whatever the result of the vote, this will not be a victory for either the truth or democracy.