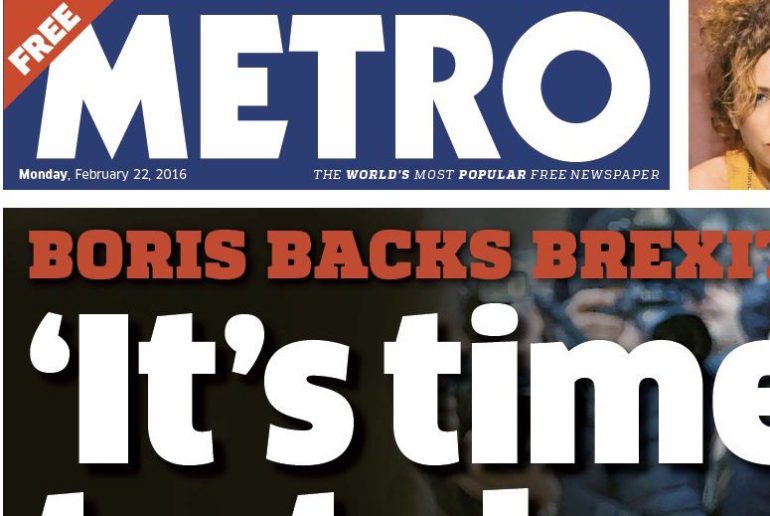 Commuters on 21 June had little chance to avoid Vote Leave’s ominous ‘Take Back Control’ slogan, thanks to a wraparound advert encasing the Metro. Paid for by the Democratic Unionist Party (DUP), the message of the Leave campaign was given pride of place in the free paper available in public transport stations across the country. But, on 22 June the paper featured an advertisement to challenge this narrative, presenting migration figures to the UK in direct comparison to the population as a whole.

Notably, though, it was paid for by one man. 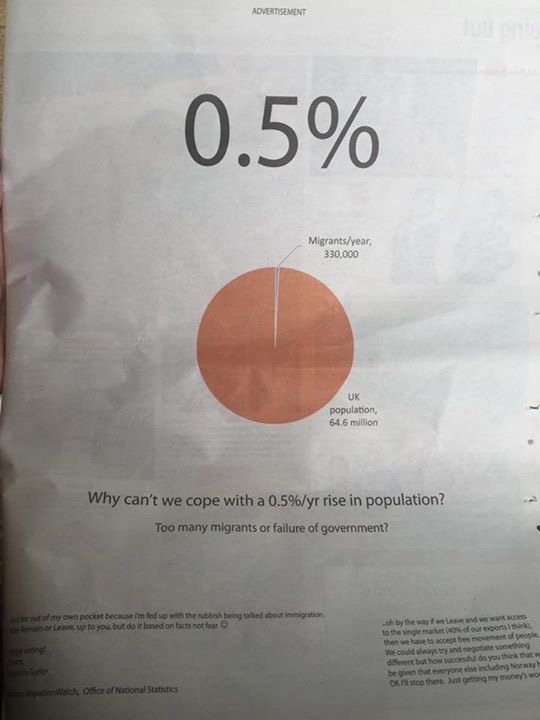 Signing off as Laurence Taylor, with a request for people – no matter which way they vote – to do so using ‘facts not fear’, he used data from Migrationwatch and the Office of National Statistics. His calculations show that, despite the scaremongering from the Leave camp about migration and the impact immigrants have had on the UK, it only accounts for a 0.5% rise in the population. He posits the question: ‘Too many migrants or failure of government?’ His point is that if our nation’s infrastructure cannot cope, then perhaps it is this that is the problem – not immigrants.

The Metro had a similar wraparound advert on the same day sponsored by the Labour Party, but its impact just cannot compare to Taylor’s. He wished readers ‘Happy Voting!’ and made an important point about entry to the single market with the quip that he’s ‘just getting his money’s worth’. Essentially, Taylor nailed down, with an informal and jovial delivery, the central counterpoints to the Leave campaign.

Following the final installment of the BBC’s live televised referendum debates on 21 June, where accusations abounded on both sides of lies and misinformation, injections of truth into the discussion are much needed. The fact that in this instance it had to come from a member of the public paying out of his own pocket, in a manner and style that the official Remain campaign has never quite mastered, is damning for both sides.