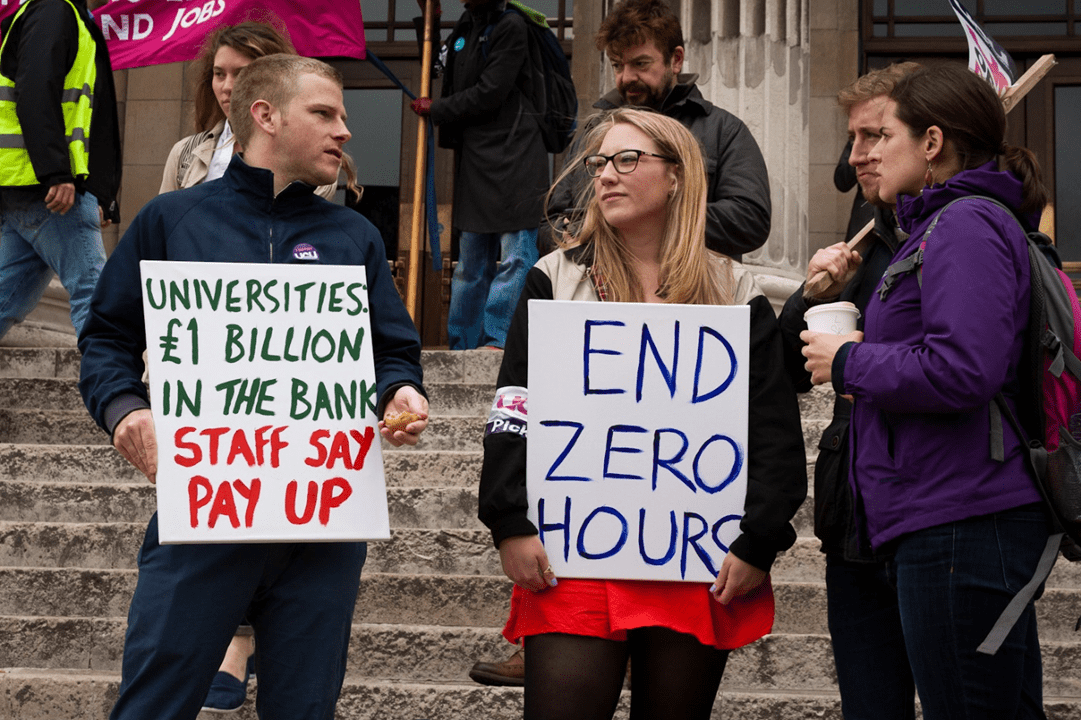 On Wednesday thousands of university and college lecturers took to picket lines in a one-day strike, as it emerged that vice-chancellor pay rose around four times faster than pay for academic staff during the past year.

The strike, called by the University and College Union (UCU) is part of a dispute with the university employers over several key issues:

At the nub of the action is a huge pay divide between working lecturers and their bosses. A recent survey of vice-chancellors’ pay showed that, on average, university bosses received remuneration of £274,405 in 2014/15  –  5.4% higher than in 2013/14. But the average pay rise for the majority of academic staff was just 1.3%.

The University and College Union (UCU) said universities could afford to pay more and the latest pay offer did little to address the real terms pay cut of 14.5% that its members have suffered since 2009. UCU branded the disparity a ‘disgrace’ and said universities need to consider how they could continue to attract the best academic staff while pay for the majority was being held down.

The blatant double standards in university pay are a disgrace, and are being felt acutely by staff across the sector. Despite clear calls from government for pay restraint at the top, vice-chancellors have enjoyed bumper pay rises of over 4% on average while increases for rank and file staff are held down at barely a quarter of that.

No UCU member wants to harm our students’ education. However we cannot sit back and watch our pay eroded, inequality grow unchallenged and employment become more insecure every year.

Members have made it clear that they won’t tolerate a continued squeeze on their income, pay inequality and the increasing job insecurity blighting the sector.

If the employers wish to see a swift end to this dispute, and avoid further disruption, they need to come back to the table with a much-improved offer.

But with the bosses refusing to budge, the union has promised a summer of disruption.

The next one day strikes are planned for August and September when UCU members plan to disrupt pre-sessional courses, further open days and new intake days.