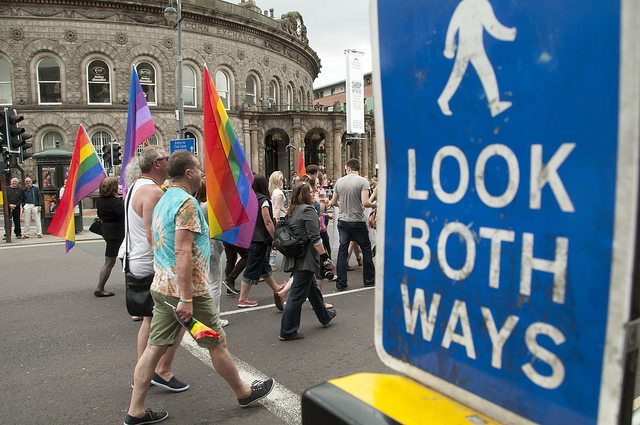 A shocking new survey by the organisers of Pride in London reveals that the LGBTQ+ community may not have made as much progress as thought.

In partnership with opinion polling company Populus, Pride surveyed more than 1000 people nationally on how they felt about their sexuality. They then carried out the same survey on straight people, and juxtaposed the two. And the results don’t make for comfortable reading.

But the most unsettling part of the results was in response to whether LGBTQ+ still felt the need to lie about their sexuality or gender identity at some point in their daily lives.

A staggering 74% said they did, which for many in both the LGBTQ+ community, and wider society in general, should garner pause for thought.

As The Canary discussed in the wake of the Orlando massacre, where 49 people in a LGBTQ+ nightclub were murdered by Omar Mateen, the community still has a long way to go:

Sexuality is now perceived and portrayed in the media as no longer so much of an issue. Openly gay characters are on every soap going. Pop stars come out, and society generally shrugs its shoulders and says “and?”. People even have “coming out” parties. This is huge progress, undeniably – but are we now seeing a regression?

We may well be seeing a regression, as it is obvious from the results of this survey that LGBTQ+ people are not echoing the media’s relaxed attitudes around sexuality. Or they are, at least, not feeling the benefits. But if you are a member of the “community”, you probably knew this already.

It’s of little surprise, however, when you look at hate crime statistics in the UK.

Hate crime against the LGBTQ+ community rocketed by 22% in 2014-15 in the UK. 5,597 cases were reported. While this may be an indication of the willingness of individuals to report such attacks more readily, it is a very sorry state of affairs that in the 21st century these incidents still occur. A quarter of LGBTQ+ people alter their behaviour to hide their sexual orientation to avoid being the victim of a hate crime, and two-thirds of those experiencing a hate crime or incident did not report it to anyone.

Furthermore, it appears that people’s internal strife with their sexuality is still being fomented from a young age.

Research for the charity Stonewall showed that more than half (55%) of lesbian, gay and bi pupils have experienced direct bullying. 59% of trans youth said they had deliberately hurt themselves, compared with 8.9% of all 16- to 24-year-olds. Couple this with 96% of young people hearing homophobic language at school, and it’s of little wonder that the fear of openly being yourself transcends into later life.

People in Britain who are LGBT+ (sic) still face the need to filter their true selves, and hide affection to their loved ones. At its heart, Pride in London is a community led movement that recognises the struggles and successes of everyone in our community.

While the LGBTQ+ community has made huge progress in recent decades, the results of this survey show there is still much work to be done. Many barriers still need to be broken down, and stigmas addressed within society – before all members of the LGBTQ+ community can fully embrace themselves for who they are, openly.

Events such as Pride in London are one way of somewhat redressing the balance.

But there is still a long way to go before LGBTQ+ “Pride” is something that can truly, explicitly, be felt.

Attend a Pride event in your area.