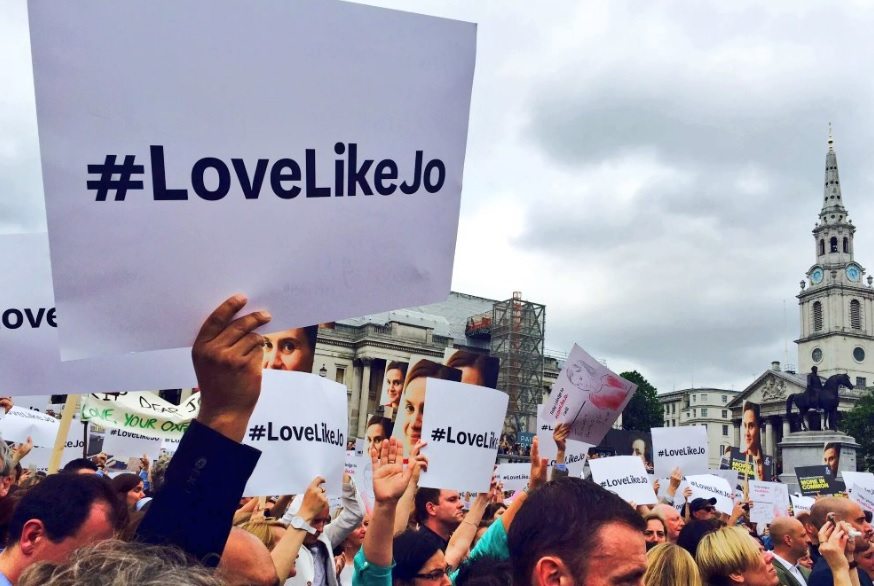 As thousands of people gathered in Trafalgar Square on 22 June to pay tribute to murdered MP Jo Cox a week on from the tragic event, one Nobel peace prize winner delivered a truly inspiring message.

Nobel Laureate Malala Yousafzai, the teenage education activist from Pakistan who became a global symbol of resistance when she survived a near-fatal attack on her life by extremists in 2012, spoke about what she had in common with Jo Cox.

She began on a lighthearted note, saying:

One thing that you may not realise that I have in common with Jo, that we both are very proud of, is that we are small.

But at the heart of this comment was Malala’s assertion that Cox:

showed us all that you can be small and still be a giant.

She went on to say that the MP:

proved that she was a giant when she stood up to declare that we have more in common than that which divides us.

And far from just being “a line in a speech”, Malala stressed:

it was a sacred principle that powered her life and her work.

In other words, Cox did more than just talk the talk, and she didn’t let anything stop her from devoting her life to a fight for unity and peaceful coexistence.

This life philosophy was reflected by her husband directly after the event. Although Cox had been murdered on 16 June because of the hatred of a neo-Nazi extremist, her husband had the resolve to say that:

she would have wanted two things above all else to happen now, one that our precious children are bathed in love and two, that we all unite to fight against the hatred that killed her. Hate doesn’t have a creed, race or religion, it is poisonous.

With this in mind, Malala made the point that the act of terrorism committed last week had failed to create more hatred and division:

And while violence is often louder and gets more attention, peace doesn’t have to be silent. No matter how difficult it may seem at points to fight hatred with love, this battle can make a difference.

As Malala told thousands of mourners in Trafalgar Square:

you can be small and still be a giant

The outcome of the EU referendum will likely change very little. We’ll still have a ‘first past the post’ electoral system. And we’ll still have a government representing only 24% of eligible voters.

The destructive policies of austerity will continue unabated unless citizens actively demand something different. So why not:

– Support the campaign to prevent the Transatlantic Trade and Investment Partnership (TTIP), a treaty that will open the NHS up to total privatisation?

– Get involved in promoting inclusion and tolerance rather than hate?

– Support The Canary so we can keep holding the powerful to account?