French launch #OperationCroissant to keep UK in the EU - Canary 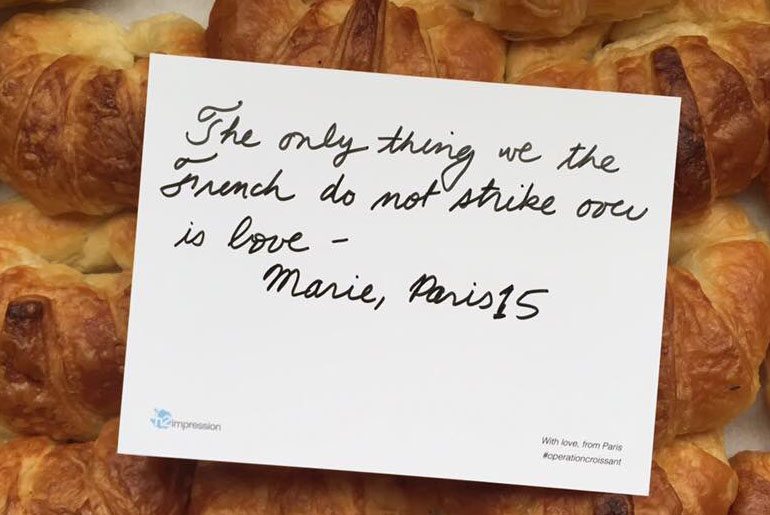 In a last ditch effort to appeal to their UK cousins, a group of Parisians have descended upon King’s Cross Station in London to give out dozens of handwritten messages to try and dissuade people from voting to leave the EU.

Entitled ‘Operation Croissant,’ the mission was organised by a group of friends, Rosa, Marie-Cybèle and Imogen, to showcase the bond between France and the UK ahead of the EU referendum tomorrow.

Passers-by have been given handwritten messages  to reinforce and spread the neighbourly love between the two nations. These notes were originally supposed to be accompanied with a croissant but, unfortunately, recent updates suggest that since the operation began, the friends have been prevented from sharing the croissants as UK election rules ban anyone giving out food which could ‘corrupt’ voting intentions.

The group of friends came up with the idea after they were shocked to find another friend was undecided about which way to vote. They offered to bring a croissant from France to London to sway her decision and it worked.

The operation is currently in full swing at King’s Cross and Twitter has been going crazy for it.

#operationcroissant is magic. Never mind clear political + economic boons, this is about friendship and looking out pic.twitter.com/UbXsXMMkrb

#OperationCroissant is one of the best campaigns to come out of this shambles of a referendum! Vote #remain pic.twitter.com/MuHux7t2YP

Inspired by Operation Croissant, two Dutch sisters are now organising a multi-city stroopwaffel handout. Who’d have thought that the Leave Campaign’s biggest rival would be Operation Croissant? It’s another final twist to what has been a roller-coaster of a referendum.