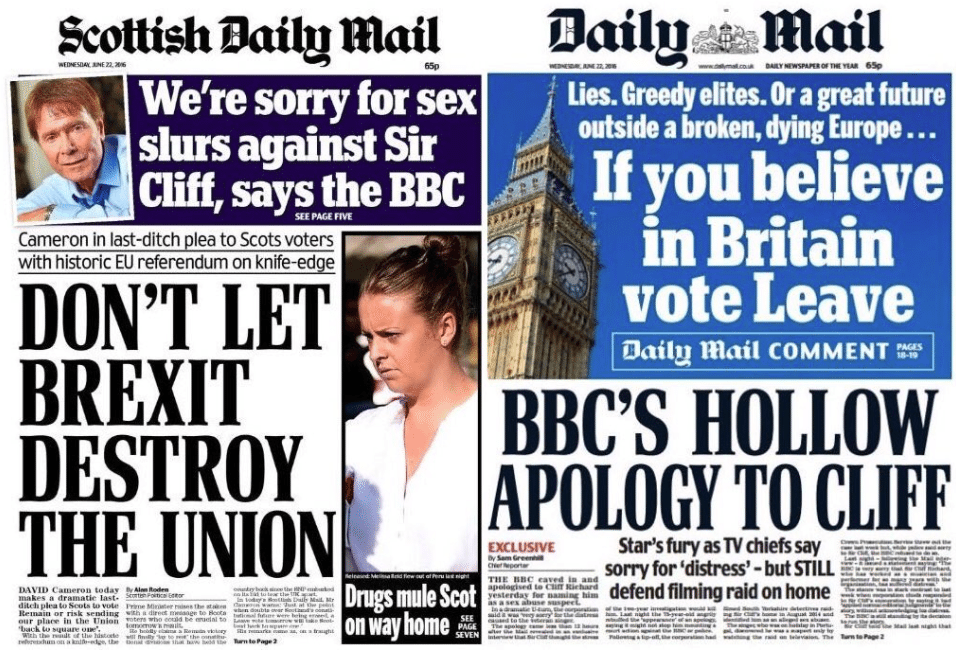 On Wednesday morning, the Daily Mail presented two front pages on the EU Referendum. One for Scottish readers, and one for English readers. By accident, they summed up exactly why no one should waste a penny (Scottish or otherwise) on their paper.

Here are the front pages…

While our readers may have different views on whether the Mail is racist, bigoted, homophobic and sexist – we can now at least agree that they are two-faced. They tell Scotland (staunchly pro-EU) that they stand with them, and they tell their non-Scottish readers (staunchly anti-EU) that they stand with them too. In reality, they stand someway back from both groups counting the money made from exploiting their fears and concerns, and worrying not a jot about either.

The Canary ran a popular editorial yesterday on why the Mail and so many other cynical characters in our media and political class have turned the EU Referendum into a cruel trick on the British public.

Britain is hurtling ever closer to the day of the Brexit vote. In a very short while, the public will cast their ballots to remain in the EU, or leave. But however they vote, one thing is sure: the EU Referendum is one of the cruellest tricks ever played on the British public.

The Referendum is not about our fate in the EU, or controlling our borders, or protecting our sovereignty as a nation, or enhancing our democracy. It is, as is almost everything in modern politics, about wealth and power.

If the EU Referendum was a genuine debate about the future of our nation, it would look very different.

Each party (and indeed factions within each) would have set out a clear vision on whether to leave or remain in the EU, and what each of those choices would look like under their leadership. Referendum voters would know that after the vote, they could then elect to government the people they felt most confident could deliver that future.

For example, people who wish to leave the EU because they find it anti-democratic, but wish to perform a ‘Lexit’ (a left wing exit) – could have that choice. They could say goodbye to Brussels, but retain key protections in UK law for working people, disabled people, ethnic minorities and so on. They could rebel against the neoliberal economic orthodoxies of the EU, and advance a democratic socialist agenda at home. They could kiss goodbye to TTIP, and rest assured that there would be no sinister new free trade agreement put in its place. They could work for the outlook of Britain to remain global, while the decision-making remained local. But in the absence of a general election, there is no chance of a Lexit whatsoever. This leaves an entire swathe of left-wing eurosceptics with a truly horrible choice. First, they can vote to remain in an EU that has become so anti-democratic that it deposed the democratically elected leaders of Greece and Italy in order to push through its economic and political agenda. Second, they can vote to leave on the terms of a UK government to the right of that anti-democratic institution. This means, whether they like it or not, they are voting to lose key civil, human and workers’ rights, to accelerate a TTIP-style trade deal, to see British science, technology and engineering take a massive hit, and see any resulting recession become the pretext for austerity on steroids. What a choice!