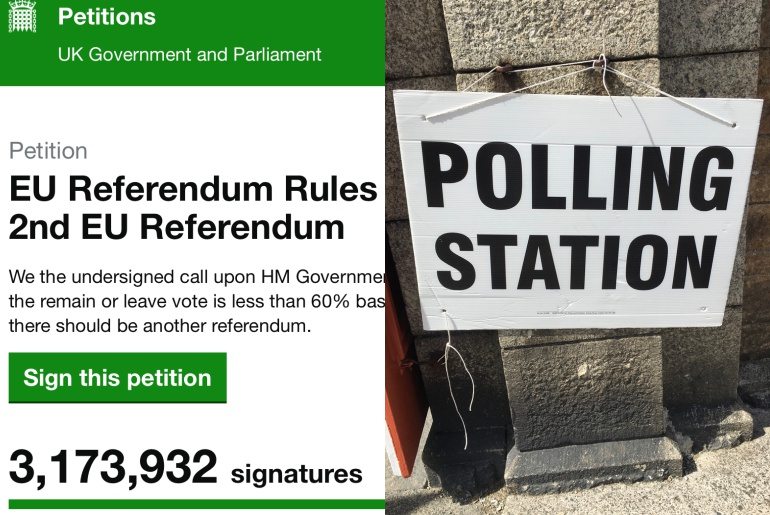 As previously reported in The Canary, a petition calling for a second referendum on the EU has been massively successful. In fact since writing on Friday, the number of those signing has jumped from over 135,000 to over three million people, making it the most successful ever UK petition.

The petition, which needed 100,000 people to make it eligible for a parliamentary debate, states:

We the undersigned call upon HM Government to implement a rule that if the remain or leave vote is less than 60% based a turnout less than 75% there should be another referendum.

However, in an ironic twist, it has been revealed that the creator of the petition was a Leave supporter, who didn’t believe they were going to win. And, he’s very angry about its sudden popularity.

William Oliver Healy, who started the petition, claimed in a statement that it had been “hijacked” by Remain supporters. And now that his side has won, he has suddenly retracted his thoughts on the numbers necessary for the result to be valid:

The referendum was fairly funded; democratically endorsed, every vote was weighted equally and I believe this was a true reflection of the mood of the country.

But, given there was no indication of the politics of Healy in the petition text, he can hardly claim it has been hijacked. And to then retract his views on the numbers needed to make the referendum valid after winning is laughable, to say the least.

There have been mixed reactions to the petition. Most commentators believe, while possible, a second referendum is highly unlikely. However, thought must be given to the fact the petition has grown, and is still growing, at such a massive rate.

Furthermore, given the Leave supporters who have come out of the woodwork to say they regret their decision, there are issues here which have to be taken seriously by people on all sides of the political spectrum.

And with more and more people finally discovering they have been lied to during the campaign, the numbers may rise even further.

Regardless of what happens next, with many assuming the petition was started as a result of sour grapes from Remain supporters, the fact this was started by a Leave campaigner, has provided a much-needed laugh and light relief in what have, for many, been very dark days.

Sign the petition calling for a second referendum, if you agree.