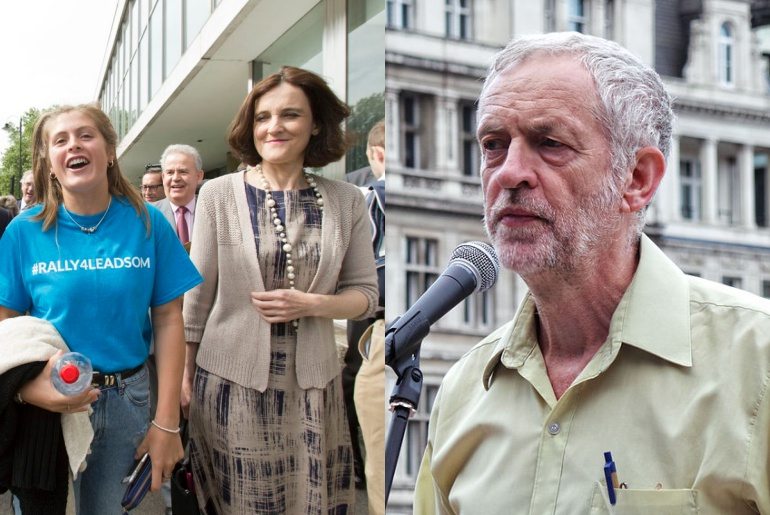 Supporters of Andrea Leadsom’s bid to become the next Prime Minister have been attempting to copy Corbyn’s popularity on the streets. However, the results are utterly cringeworthy.

Around 100 of her supporters gathered in Westminster to march in her rally. Walking along the pavement, led by MP Tim Loughton, her campaign manager, the well-heeled “protesters” joined in chants of:

When do we want it?

The reaction on social media was predictably scathing:

Was it the new cast auditions for new Dawn of the Dead film in Whitehall today? No; just a #Rally4Leadsom, similar! pic.twitter.com/bmPHkqXxyI

Others compared the minuscule turnout to the crowds Corbyn has addressed:

And it is Corbyn’s popularity among ordinary people she is desperately trying to emulate through this campaign.

It is unsurprising that Leadsom is looking to Corbyn’s success for inspiration – he also came from being a relatively unknown politician (outside of left-wing circles), was never the favourite amongst MPs, but won the popular support of Labour Party members.

However, any similarities end there. Leadsom is far from a woman of the people. A combination of her background in The City, connections to oil companies, and her disdain for workers’ rights hardly make her someone to rally behind.

WHAT DO WE WANT ⁉️

Leadsom’s speech at the rally was full of fluff and promises without substance. She described herself as an “optimist” and that:

I truly believe we can be the greatest nation on earth.

And, whilst she agreed a plan is needed for Brexit, she failed to set out any coherent means of doing so, although unlike her rival, Theresa May, she appeared to promise security to migrants already living in the UK:

So I tell you today – I will not use people’s lives as bargaining chips in some negotiation. People need certainty and they will get it – I say to all who are legally here that you will be welcome to stay.

However, reading between the lines, this is a very ambiguous statement. Obviously those legally in this country should be able to stay; at the same time she holds no guarantees about what their legal status will be in a post-Brexit world. She may not use “people’s lives as bargaining chips”, but that is not the same as saying she will advocate for their right to remain.

But it is the final part of her speech, which is perhaps the most chilling, harking back to colonalism, with a disturbing rhetoric that presumes an isolationist UK is at the forefront of progressive ideas.

This is the country that gave the world the rule of law, parliamentary democracy, the right to own property, the English language and the free market. We are a remarkable people and we have so much more to give.

It is now known with certainty that either Theresa May or Andrea Leadsom will be the next Prime Minister. Unfortunately, neither seem a good option, and we are going to need strong movements to oppose the further damage they will inflict on this country.

Find a local group and get involved in the fight against austerity.