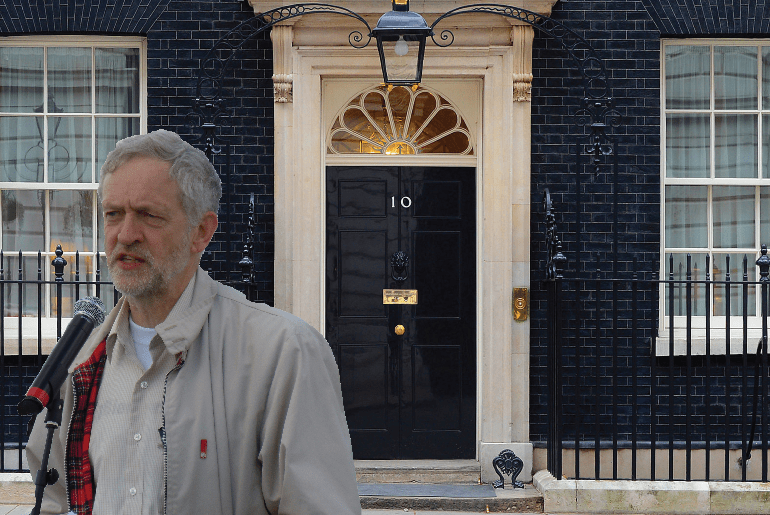 This is the final part of Steve Topple’s analysis of why Jeremy Corbyn needs to win the Labour leadership contest.

After over a week of deliberation, with claim and counterclaim being thrown by both sides, Labour’s National Executive Committee (NEC) decided on Tuesday that Jeremy Corbyn would go straight onto the leadership election ballot, without the need for nominations from the parliamentary Labour party (PLP).

In a shock move, that many weren’t expecting, Corbyn would now appear to be the favourite to win this race, as his support from the trade unions and vast swathes of the membership is unshakeable.

However, even if he does remain leader of the Labour party, there is a vast chasm between maintaining that position and convincing the electorate to vote and make him prime minister in 2020. And with a hostile press, pouring scorn and labelling him and his supporters as “hard left” and “Trots”, it will be an uphill struggle.

Furthermore, as I described on Tuesday, the historical relationship between the Labour party and the worlds of finance and big business mean that the PLP, its cohorts and friends in the media will not take his victory lying down.

On the contrary – what he is proposing to do regarding the policy-making process within the party, may well make him even more open to attack than he is already.

Corbyn has already said that he wishes to “democratise” Labour’s policy-making process and “empower party members” – and this is what has most likely spooked the PLP and its big business backers the most.

While the Labour party claim that policy is decided by the National Executive Committee (NEC) after the National Policy Forum (NPF) submits its proposals, this is disingenuous. It leaves out where the NPF gets its policy ideas from in the first place. Consultations carried out by big business.

Take Labour’s fracking policy for the 2015 General Election. It was criticised by environmental campaigners as not going far enough, and rounded on by the SNP. And when you realise who devised it, it’s of little surprise.

As I wrote last year, a businessman called Algy Cluff was at the centre of both Labour and Conservative fracking policy:

Mr Cluff owns several companies, all directly involved in the exploration of “unconventional oil and gas”. One of these companies, “Cluff Natural Resources”, has agreed to “collaborate” with multinational vultures Halliburton on UK exploration, who in turn work with Shell, internationally.

Unsurprisingly, Mr Cluff is a Conservative Party donor – mainly to Ken Clarke, whose constituency of Rushcliffe falls in the boundaries of an exploration licence for fracking.

But, Mr Cluff also had direct influence over Labour fracking policy for the general election – two of his employees, a director and a consultant, advised on the study which underpinned the party’s policy.

The same can be seen in the party’s infrastructure policy. Labour employed Sir John Armitt to conduct its consultation in this area for the general election. Armitt sits on the management advisory board of Siemens – who not only are subcontractors for rail franchisees like GTR, but also invest heavily in UK wind farms. Also on the consultation panel were Rachel Lomax (a director of HSBC) and a KPMG executive, amongst others.

If Corbyn’s proposals happen, and party members get a direct say in Labour policy – then the influence that big business currently has over decision making will be greatly diminished.

Furthermore, the “revolving door” between being an MP and having a cosy job in the private sector when you retire will be closed – the likes of Lord Darling, Lord Blunkett, Lord Mandelson et al could be unemployed now, if it wasn’t for the perpetual back-scratching that has occurred over many, many years.

As Nick Laitner of MHP Communications (a lobbying firm which acts as a go-between for big business and MPs) said in an interview surrounding the election of Corbyn as Labour leader:

Most [corporations], engaging on issues that matter to them, will clearly be treated with a greater level of hostility than they are used to […] picking off individual MPs and factions within the Party will be crucial to ensure support for an issue or policy. The realist wing of the party (led by Chuka [Umunna], Liz [Kendall] and Tristram [Hunt], among others) will become a safe space for those for whom business is not a dirty word.

Of course, with the “othering” that has occurred of Corbyn and his supporters, big business is portrayed as a dirty word in the Labour leader’s language. It’s actually not – it’s merely that he wants them to operate in a fair and just manner.

But “fair and just” are seemingly benevolent notions when it comes to the PLP, as they have conducted themselves in neither of those ways since Corbyn was elected.

One of the favourite lines of Corbyn’s detractors is that he’s “unelectable”; that Labour have to be able to “win” the 2020 general election. That it’s all about the winning, not the taking part.

Not one of them seems to be able to explain, however, just what the point of winning is if you don’t intend to use that victory to actually change anything.

If there’s one lesson to be learned from Ed Miliband’s failed election campaign, it’s that flying too close to the Tories just doesn’t cut it anymore. People rightly blamed the fact that Labour failed to address the repeated line from Cameron that they “were not to be trusted with the economy” – a line which was, in part, nonsense.

But this was only one aspect of their loss, and let’s be frank – cut through the PR stunts like the infamous “Ed Stone” and the “Milifandom”, and the difference between the UK’s two main parties was what? The colour of a rosette, and a load of hyperbole.

But it goes deeper than that.

There is a bubbling disenchantment and disconnection with establishment politics in general, and especially with Labour. You only have to look at the EU referendum result, where huge chunks of traditional Labour heartlands voted to “Leave” – ignoring the message their traditional party sent to them, and instead flipping them the bird.

Those within the PLP who think that going back to the Third Way  – or Miliband’s hybrid of it – will act as some sort of magic wand being waved over the electorate are sorely mistaken, utterly deluded or thoroughly self-absorbed. Probably the latter, or a combination of the three.

They also seem to believe that those policies, centred around the stock markets and multinational corporations, are sustainable in the long-term.

If the growing disenchantment witnessed in the scandal surrounding the Panama Papers, and tangible on the continent if the rise of Syriza in Greece and Podemos in Spain is anything to go by, the public are beginning to wake up to the nefarious, greed-driven trickery of our global financial system and its advocates.

All of this is, ultimately, why Corbyn has to win. Otherwise it’s game over. Simple as. And let’s be clear –  ignoring what the naysayers proclaim, he is capable of winning the general election in 2020.

However, he has a monumental task ahead of him. He’s in no-way guaranteed of a win in 2020, purely and simply because he has over 30 years of firstly neoliberal, then corporatist, ideals and beliefs to vanquish. 30 years of the electorate being subjected to the same, entrenched propaganda and ideology by all major political parties.

This won’t happen overnight, and nor will Corbyn go far enough in his policy decisions for many on the left. But what he would do as Labour leader is bring about a process of mainstreaming progressive ideas, and also give a platform to those which are more radical. He could, and probably would, be that paradigm shift we have so far been missing.

If he fails, then you can forget the idea of Labour ever leaning to the left again. His rise and fall will be cited forever as the reason why the party cannot try the “hard-left” experiment.

It will also have a knock-on effect on the whole of the left, more broadly – as his fairly polite form of social democracy will forever be painted as that of “Trots”, a “rabble”, and “militant”. Anyone beyond that sphere of thinking will be seen as positively Maoist from then on.

As Einstein is famously mis-attributed as saying:

Insanity is doing the same thing over and over again, but expecting different results.

The Labour party cannot be allowed to do that, however much the PLP, its cohorts and the media try and force it to.

Because it’s not just Corbyn at stake, here. Nor is it the general election in 2020.

This is the final installment of a three part series. You can read part one here and part two here.