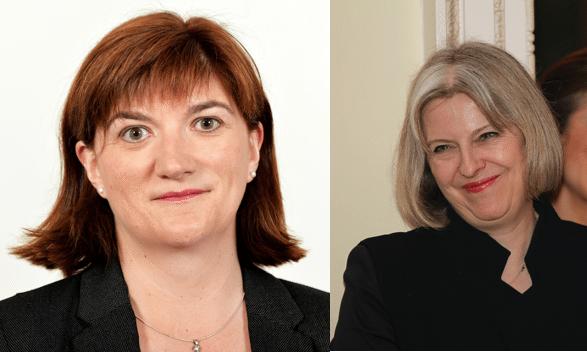 As the school year draws to an end, Theresa May has just delivered teachers an end of term present – she has sacked Nicky Morgan, the much-hated Education Secretary.

Morgan will not be leaving a good legacy in education, and it is difficult to pinpoint one thing she has done which has benefitted children’s education during her tenure. In fact, she is the first Education Secretary to have seen both teachers and children go on strike against her hated policies.

Earlier this week, Morgan was forced to defend why 47% of 11 year-olds had not reached the needed standards for their SATs tests. Remember, these were the tests which were so arcane that David Cameron refused to answer the questions, and schools minister Nick Gibb got the answers wrong when he attempted them in a radio interview.

A petition calling on Morgan to resign, which states “Nicky Morgan has failed our children – she should apologise and resign” has attracted over 15,000 signatures. The petition further said:

This year 47% of 11-year-old children will be told they haven’t reached the “expected” standard in at least one of their SATs papers. Last year this figure was only 15%. This is extraordinarily demoralising for children who are just about to make the big step up to secondary school.

Then there was the issue of testing of 6 and 7 years olds which led to a children’s strike in protest at the tests. These tests were criticised by teachers as being “ridiculously difficult”. Another teacher wrote about the test:

Had one poor girl in tears, another with a stress-induced nosebleed during the test, and myself and the head can’t even agree on one answer … so what hope for the children?

Another highlight of Morgan’s career was the massive u-turn she had to make on academies. She had announced that she was going to force all schools to become academies. However, after facing criticism and rebellion from all quarters, including Mumsnet and Tory councillors, the planned was shelved.

Earlier this month, teachers were forced to strike over funding for schools and their pay and conditions. Acting leader of the National Union of Teachers, Kevin Courtney said about the strike:

Teachers do not take strike action lightly, and many will go on strike today with a heavy heart but with the feeling that enough is enough. Teachers are weary of seeing the education that children receive negatively affected by Government policy, of working in schools where the funding is insufficient and their terms and conditions are being eroded.

However, instead of listening to their demands, Morgan hit back with the absurd comment that teachers “were playing politics with children’s futures”.

With this legacy, it is unsurprising that so may people are happy to see her go:

That thunderous noise earlier today was the sound of every teacher in the country celebrating the demise of Nicky Morgan and Michael Gove.

Whether or not Morgan was sacked as a result of her disastrous record, or because she supported May’s rival, Michael Gove, is unknown. It is also unknown whether her replacement, Justine Greening, will be any better.

However, it is still a cause for celebration to see someone go who is so hated by pretty much everyone in education, and who has caused so much damage to our children’s education and mental health.

It is probably too much to hope that the new Education Secretary will be children centered, and care more about developing their love of learning and allowing children to be children than whether they can recognise a subjunctive clause.

But it can at least be hoped that she will be better than her predecessor, and that even the smallest modicum of sanity can be returned to education policy.