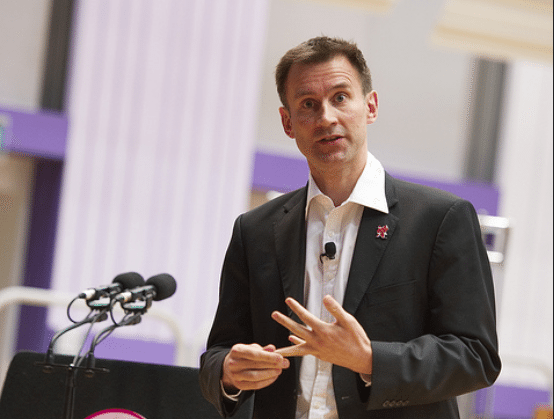 As Theresa May continued her cabinet reshuffle for a second day, rumours were flying that Jeremy Hunt may be removed from the position of health secretary. People took to social media to convey the reaction to the possibility but were met with a savage response by one infamous Brit – who inadvertently highlighted exactly why Hunt ‘must go’.

The Green party’s Jonathan Bartley was waiting in hospital when the news of Hunt’s imminent departure came through and tweeted the reaction from those in his vicinity:

I’m on a hospital ward with my son, awaiting a delayed and postponed operation. Huge cheer just erupted at news Jeremy Hunt has been sacked.

His tweet garnered thousands of likes and retweets, indicating there were many people who shared the sentiment. But ex-Tory MP Louise Mensch, who is currently exiled in the US, was not happy about such celebrations of Hunt’s demise. So, when the news came in that Hunt’s job was in fact safe, she responded to Bartley with the following:

The inhumanity of a response like this, after Bartley clearly detailed the medical situation he was in, was not lost on those who witnessed it:

@jon_bartley argghhh Mensch. You really are the lowest of the low

@jon_bartley what on earth is wrong with you ?

Says it all really about the mentality and sheer cruelty of Tories like Louise Mench https://t.co/kbtmvZ84Db

But despite the uproar over her comment Mensch just couldn’t stop herself:

What Mensch fails to acknowledge is that “Hunt haters” feel that way for a reason. In his time as health secretary he has overseen a complete breakdown in trust with health professionals, an accelerated privatisation of the NHS, and proved himself completely ignorant when it comes to medical common sense. Additionally, figures show he has literally pushed the health service to the brink of bankruptcy during his tenure. And he has openly admitted his intention to move the UK towards a US-style healthcare system – which would virtually end the treasured public service as we know it.

During her time in parliament, Mensch supported many of the Conservative’s ‘reform’ proposals for the NHS. So, part of her butressing of Hunt most certainly resides in her approval of these damaging Conservative policies. But, her vicious defence of the health secretary speaks of something more.

She’s locked in an ‘us against them’ battle. The ‘us’ in the equation is the Tory government – Hunt specifically in this instance –  and those who wield the power. The ‘them’, or the haters, scumbags and tits, are those who challenge that power and, of course, the public who have to suffer under whatever the powerful choose to do.

This mentality has no place in a healthy democracy. The ‘them’ should be listened to, especially those who directly elected the ‘us’ to represent them: the public.

Hunt has proved himself incapable of listening, even to professionals within his own area of responsibility, and that’s one of the many reasons he should go. But it looks like he’s staying, for now.

Mensch is long gone though from the political sphere. And with an attitude like this, that’s at least one thing we can celebrate.

Image via the University of Salford/Flickr