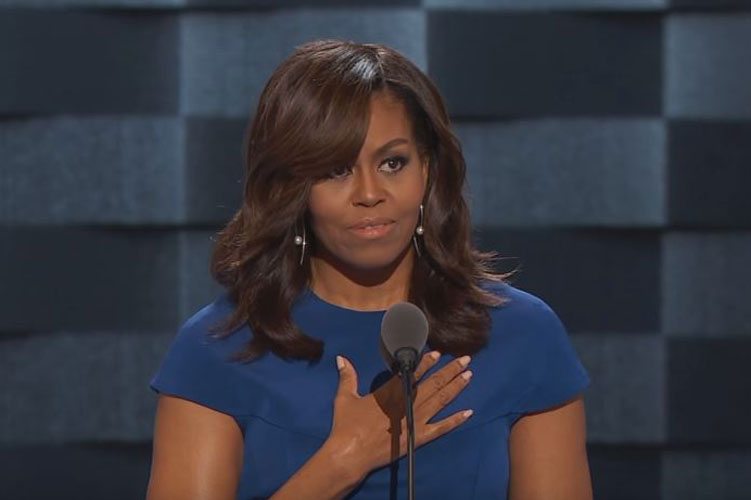 On the first day of 2016’s Democratic National Convention (DNC) in Philadelphia some of the party’s highest representatives took to the podium, to put forward their hopes for the Democrat’s near and far future. Though Bernie Sanders began his speech to a three-minute standing ovation, it was First Lady Michelle Obama’s speech that everyone is talking about.

But not everyone has noted the most outstanding moment of the speech.

Michelle Obama’s 15 minute address was primarily a lengthy tribute to Hillary Clinton – a woman who she says represents “the story” of America. Obama went on to describe that story, not shying away from the most crucial truth about the position of the current First Family.

Leaders like Hillary Clinton, [have] the guts and the grace to keep coming back to put cracks in that highest and hardest glass ceiling, until she finally breaks through, lifting us all along with her.

That is the story of this country. The story that has brought me to this stage tonight. The story of generations of people who felt the lash of bondage, the shame of servitude, the sting of segregation, but who kept on striving and hoping, and doing what needed to be done. So that today, every morning, I wake up in a house that was built by slaves.

The First Lady is right, and appears to have touched quite a nerve with Americans who were not aware of this. The White House Historical Association (whose site, following Michelle Obama’s speech, is down) confirms that African Americans, both “enslaved and free” contributed the “bulk of labor”.

There is a tension in the speech about Obama’s passion and honesty, and her endorsing Clinton. Hillary is a noted neoliberal, welfare-ending, power-hawk. But she’s not Trump.

Most notably, though, Clinton has “a long history of switching positions on race when it suits her”. While she was First Lady, she had described black youths as “super-predators”, claiming they needed to be ‘brought to heel’. Still, Clinton has considerable sway with black and ethnic minority voters in the US.

The Obamas have openly endorsed Hillary Clinton, who was President Barack Obama’s opponent in the Democratic primaries of 2008. The First Lady made it clear throughout her speech that she believes Clinton to be a positive candidate for the country, and though she did not address Trump’s candidacy directly, she did make several statements indirectly referring to Clinton’s opponent.

Obama noted that Presidential decisions “cannot be boiled down to 140 characters”, referring to Trump’s frequently questionable presence on Twitter, and urged Americans:

Don’t let anyone ever tell you that this country isn’t great.

Ultimately, of course, the options for American leadership are now Clinton or Trump. The vast majority of the Democratic party, including Senator Sanders, are coming out to publicly put their full weight behind Clinton for the Presidency.

However you feel about Obama’s rallying cry for Clinton’s future, you cannot help but be grateful and inspired by her bold and fresh honesty about America’s brutal past. It’s a rare gem in political rhetoric.