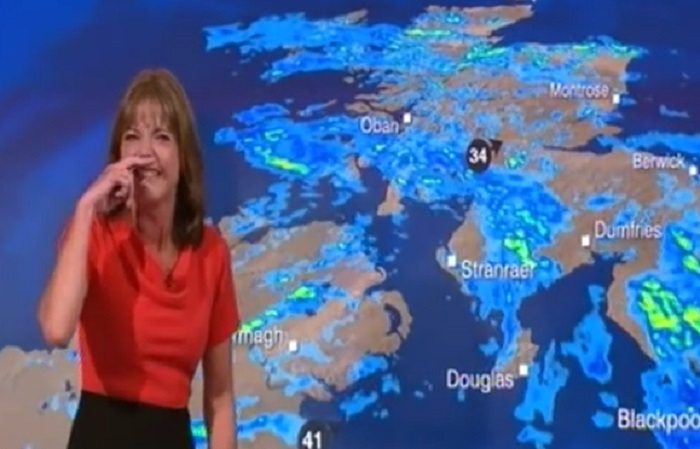 Weather presenter Louise Lear was unable to control herself when presenting on the BBC News channel on Wednesday – and The Canary dares you to keep a straight face as well.

As soon as newsreader Simon McCoy turned to link to Lear, he spotted something was up – something that appeared to be prompted by events off screen. He even gave her a few moments to compose herself, but to no avail, as whatever tickled the weather presenter must have been good.

Trying to contain her laughter seemed near-impossible, as Lear wiped away the tears – and it was made all the more amusing by the fact that the weather she was reporting on was, by all accounts, dire.

Twitter was, as it always is, straight onto the presenter’s infectious giggling fit:

Some seemed to suggest this might be a good tone for the weather, moving forward:

While others were wanting to know just what caused Lear’s uncontrollable fits of laughter:

I hope we find out exactly what caused Louise Lear's hysterical meltdown. Any ideas, @bbcweather?

This isn’t the first time that the weather has caused much amusement with viewers. Presenter Carole Walker is caught out, to say the least, after expecting a weather report before she was due to go live:

In another incident, Carol Kirkwood is obviously being goaded on by colleagues as she has a slight wardrobe malfunction during BBC Breakfast’s weather report:

Kirkwood is also known for her slips of the tongue:

However, it cannot be said that Kirkwood doesn’t have commitment to getting the job done – whatever the weather:

Then there’s this famous incident where, after being mocked by Simon McCoy about the accuracy of his weather forecasts, presenter Tomasz Schafernaker makes his feeling towards the news anchor explicitly clear. But he wasn’t expecting the cameras to be on him:

But possibly the most famous error of all time was that of Michael Fish. No introduction is required for The Canary readers who were around in 1987; suffice to say that Fish never, ever, lived this down:

Maybe reporting the weather isn’t as straightforward as it looks…