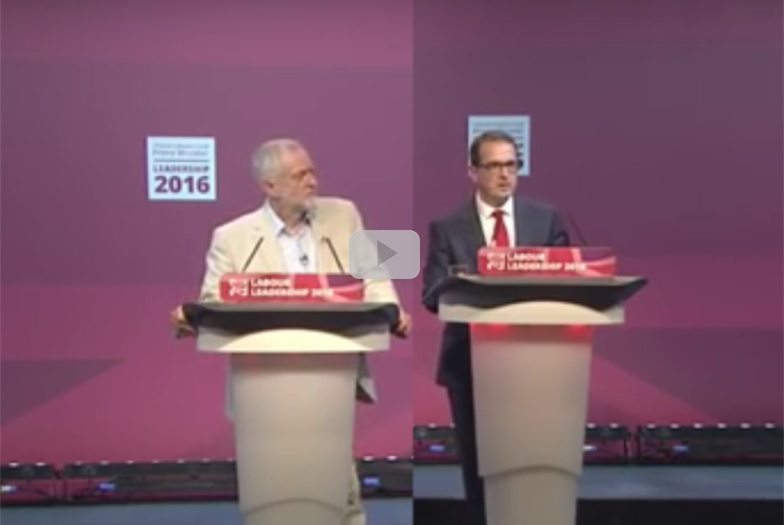 On 4 August, Labour leadership candidates Jeremy Corbyn and Owen Smith faced off in their first head-to-head debate of the campaign. But Smith’s talk about wanting to unite the party and turn it into a “credible government-in-waiting” was demolished by Corbyn with just one comment.

Smith got into the groove of his ‘unity’ and ‘credibility’ message straight away at the debate in Cardiff, saying:

I see very clearly that we’ve not been what we need to be in recent months, which is a powerful, credible opposition to the Tory Party… If you pick up the paper today, we’re 14 percentage points behind the Tories under Theresa May.

But Corbyn wasn’t having any of it. He insisted:

In the ten months since the last leadership election, we have defeated the Tories many times… We won all four by-elections, three with a big swing to Labour. We won four mayoral contests… We were ahead in May. Then came the wave of resignations. Then came the threat to unity in the party. And that is what is behind the poll.

They were both referring to the fact that the Tories’ lead over Labour has increased drastically since the EU referendum in June. On 25 June, for example, voting intentions for the two parties were neck and neck on 32%. But at the same time, opponents of Corbyn in the Parliamentary Labour Party (PLP) were planning to call for their leader’s resignation, or resign themselves if he wouldn’t step down.

By the start of August, after over a month of the PLP’s anti-Corbyn coup, the Tories had pulled ahead of Labour in the polls by 14%, leading the divided party by 42% to 28%.

The root cause of disunity

Responding to Corbyn’s comments in the debate, Smith said:

We agree that we need a united Labour Party, we absolutely need that, because disunited parties lose elections. But we have never looked more disunited…

But at this point, the Labour leader interrupted his challenger, asking:

So why did you resign?

And this was a killer blow. Smith had absolutely no moral authority to talk about disunity in the Labour Party when he himself had resigned from the shadow cabinet at the height of the PLP coup – helping the Tory government to steam ahead of its main opposition in the process.

Corbyn made exactly this point just a minute later for good measure, saying:

What I don’t understand is how you can complain about disunity in the party when you and others are the ones who resigned from the cabinet at the very point when we could have taken it to [the Tories].

Many in the room clearly agreed with Corbyn, applauding his comments emphatically.

This is precisely why Smith is unlikely to win the leadership contest with arguments of ‘unity’ and ‘credibility’. For countless Labour Party supporters and members, the resignations and public spats initiated by anti-Corbyn MPs since the Brexit vote are not the actions of people who truly believe in uniting the party and making it seem like a trustworthy government-in-waiting. Nor is proposing a “semi-split” with the creation of an “alternative Labour” if Corbyn remains leader.

And this divisive PLP behaviour is seen by many to be the main reason for Labour’s currently dismal polling results.

Corbyn, on the other hand, is the person who created a unified shadow cabinet in September 2015 with MPs from the left, right and centre of the party. He’s also the person who, even after clear hostility from the right-wing of the PLP in the early months of his leadership, still sought to forge a unified frontbench in his January reshuffle. This is a man who has demonstrated a true interest in party unity. And with this in mind, there may only be one real leadership choice for those Labour members and supporters wanting to fix a party that has never looked more disunited.

See the full leadership debate below:

– If you would like to support Labour members fighting for their right to vote in the upcoming leadership elections, you can do so here.