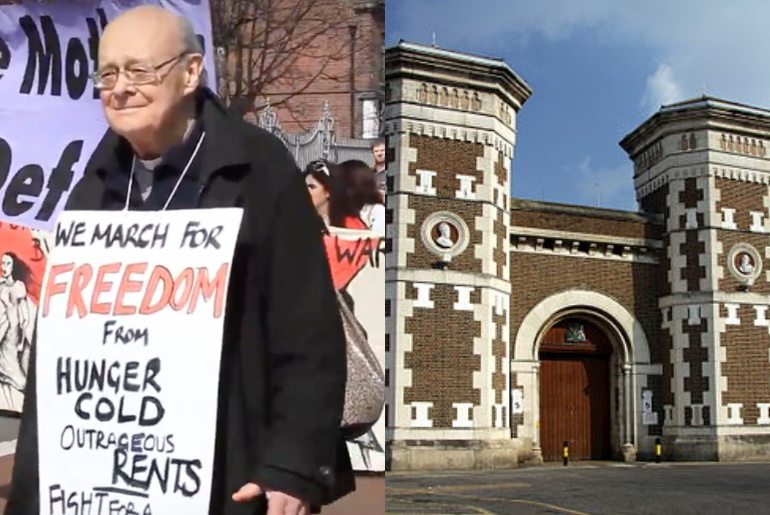 A retired vicar is facing jail time after refusing to pay his council tax in protest over the poverty that the tax is causing.

Paul Nicolson, 84, has refused to pay the tax since 2013 and owes Haringey council £2831.42. At a hearing at Tottenham Magistrates’ Court on 4 August, he was ordered to pay the amount due. If he fails to do so, he faces a prison sentence of up to three months.

In a statement to the court, Nicolson set out his reasons why he is refusing to pay the tax:

I am refusing to pay £2,831.42 council tax because of the damage the tax is doing to the health of very badly off residents of Haringey some of whom have had their income stopped by a benefit sanction.

Nicolson is also protesting about the way the court charges, and the fact that the issuing of liability orders for bailiffs to collect the money is adding extra costs and stress to the lives of already impoverished people:

Meanwhile Haringey council continues to tax the benefit incomes of its poorest residents, adding court costs, sending in the bailiffs, ignoring mental and physical ill health, the short life span, the low birth weight, food and fuel poverty, in some of the most deprived wards in the UK […] I will stop protesting when Haringey stops taxing benefit incomes.

Nicolson has refused to pay the tax since 2013, when government changes to council tax benefit took away the full entitlement and led to 2.3 million people having to pay an average of £167 a year. Haringey Council decided to make these people pay 20% of the tax, meaning already impoverished people have had to stump up between £2 and £8 a week depending on their property band.

But when people fall behind on these payments, they are charged even more by court and bailiff fees. Nicolson stated:

Those people who do not pay their council tax are sent warning letters from bailiffs (which add £75 to their bills), £102 for a court summons and another £235 if the bailiffs visit – all of which must be met out of benefits payments that stand, typically, at £73.10 a week.

The former vicar, who is also an anti-poverty campaigner, is not fazed by the idea of prison, saying he is “not in the slightest bit afraid of prison”, and seems determined to see his protest through to the bitter end:

You don’t undertake civil disobedience unless you are prepared to take the consequences. I shall go to prison if that’s what is wanted. I shall start paying my tax again when they stop taxing benefits.

This is Nicolson on the Mother’s March for Justice in 2014:

He will not be the first pensioner to be jailed for opposing the cuts. Ross Longhurst from Nottingham was sentenced to 28 days imprisonment in 2014. Speaking about his experiences, Longhurst said:

Going to prison in Britain is not good, but compared with what happens to people who do pretty minor things in many other countries in the world it’s no big deal.

It only takes a quick look at recent history to see that collective direct action can work against unfair and hated taxes. The poll tax, introduced by Margaret Thatcher, saw a mass collectivised non-payment of taxes, with one in five people not paying up. Among those jailed for refusing to pay was MP Terry Field, who was sentenced to 60 days for his non-payment.

This collaborative action, combined with the civil unrest of the poll tax riot, ultimately led to the abolition of the tax and was a major contributing factor in the downfall of Thatcher.

The principled stand Nicolson and others are taking over these cuts is to be admired. If individuals take a stand against unjust cuts that have hit those already on the poverty line hardest, it can act as a catalyst to others, and help to highlight the inequality and injustice in our society.

But real substantive change will only come when these actions become the norm – when we collectively say no to cooperating with unjust and unfair policies.

If we could all show the courage Nicolson has displayed, we’d have a real chance of making a difference.

Join groups such as the Bristol Solidarity Network and get involved in effective solidarity actions.

Get involved and support Disabled People Against the Cuts.

Find out about your rights and bailiffs.