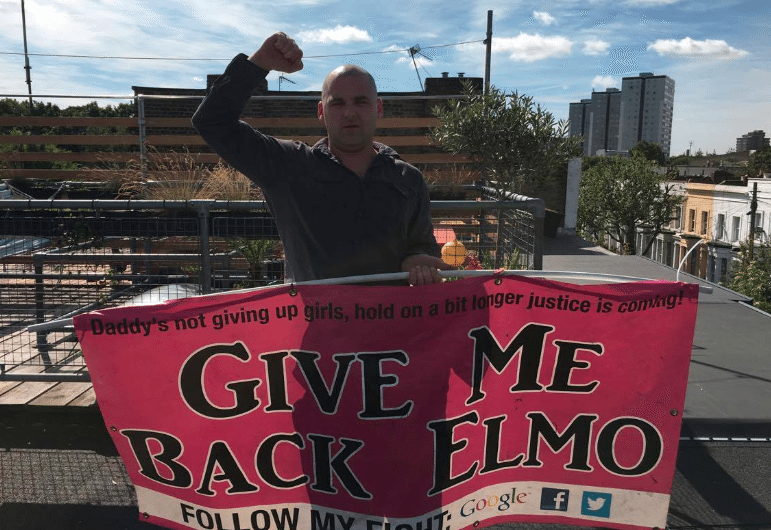 On 5 August, Jeremy Corbyn had some unwanted visitors to his home in Islington, London, when protesters from the group New Fathers 4 Justice climbed onto his roof.

Video from Jeremy Corbyns roof. We are protesting today about his part in the blocking of shared parenting. pic.twitter.com/xNexr0YM3J

The men, identified as Martin Mathews and Bobby Smith, scaled Corbyn’s home at 10am with banners reading “Stop the war on dads” and “Give me back Elmo”. Smith explained:

I tried to talk to Jeremy in March and he was very rude to me. I wanted to talk to him about his role in blocking shared parenting of 50/50 contact back in 2011.

He was part of a panel that blocked the Children and Families Act.

New Fathers 4 Justice are a splinter group of Fathers 4 Justice, who many will recall for action that has included a member scaling Buckingham Palace in a Batman suit. They too have written of their disappointment in Corbyn, stating:

Despite being presented as a radical candidate for the Labour leadership, Jeremy Corbyn’s opposition to shared parenting is as depressing as it is predictable…

While other Labour MPs like David Lammy, David Blunkett and Frank Field signed Early Day Motion 210 supporting shared parenting in 2014, Corbyn refused to do so.

But if a letter published on the Fathers 4 Justice website claiming to be from Corbyn is genuine, his reasons for doing so were not without thought.

Writing to a constituent regarding his choice not to sign the motion, Corbyn allegedly said:

On the evidence we analysed, particularly from Australia, the Committee found that the best interests of the child should remain the sole test applied by the courts to any decision on the welfare of children in the family justice system. Although in the majority of cases it will be in the child’s best interests to have meaningful contact with both parents, we found introducing a presumption or statement to that effect could cause confusion and encourage litigation, contributing nothing to the child’s well-being.

In short, Corbyn is suggesting that legally mandating that a child must have equal contact with both parents unless there is a risk of harm takes away the flexibility to react to changes in circumstance. This in turn leaves families open to the threat of further legal challenges that will cause more pain for the child involved. Corbyn’s apparent priority was the needs of the child over the wants of the parents.

Speaking to LBC, Smith said the pair of protesters would like Corbyn to “think about what his position is on shared parenting”, and were on his roof in order to “grab his attention”.

Unfortunately, it looks like Corbyn has already made his position on shared parenting crystal clear, and the main attention the two have garnered has been from the police. Corbyn’s neighbours are presumably thrilled, too.

Support independent media to make sure the narratives of the mainstream media are challenged.