The right-wing media loses its marbles as 4 major cities are rocked by protests [VIDEO, IMAGES] - The Canary 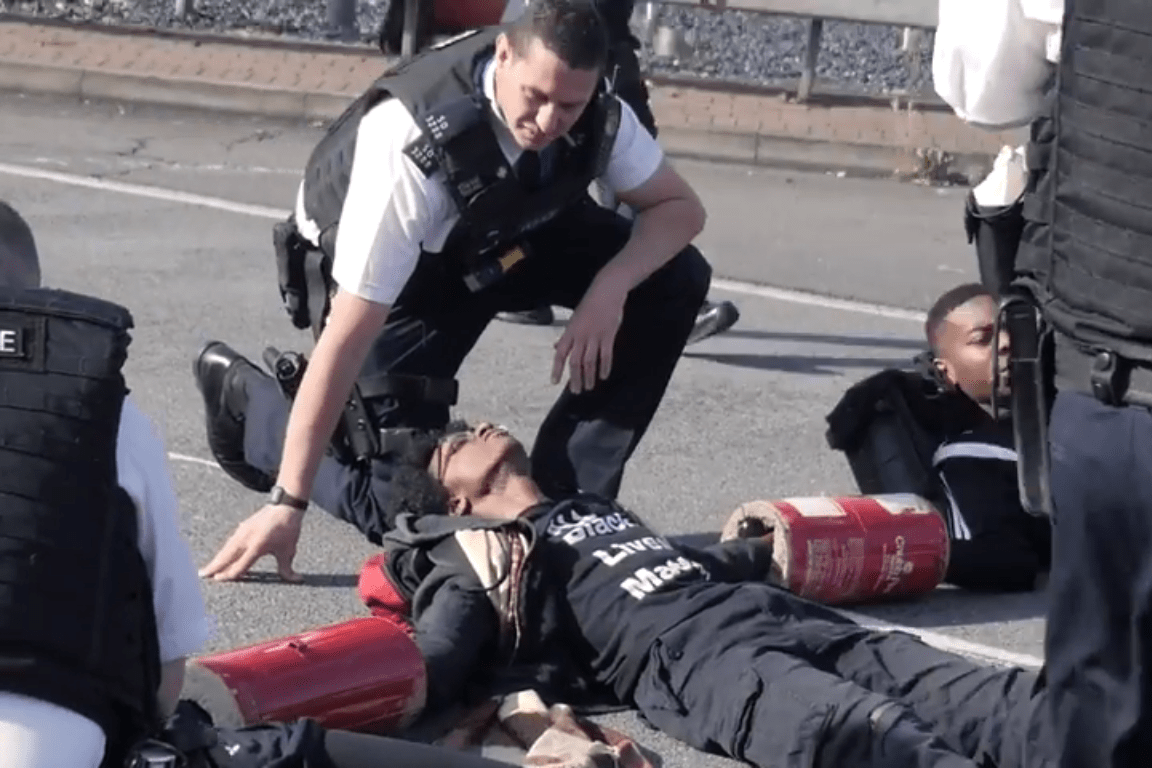 The Daily Mail has lost its marbles as Black Lives Matter UK has staged protests in four major cities, including the M4 motorway at Heathrow. A statement from the movement reads:

[We] have #Shutdown roads in London, Birmingham, Manchester and Nottingham to mourn those who have died in custody and to protest the ongoing racist violence of the police, border enforcement, structural inequalities and the everyday indignity of street racism.

The latest figures suggest black people are up to 17.5% more likely than white people to be stopped and searched by police in certain areas of the UK.

But The Mail ran with the headline:

Apparently, protesting institutional racism is a “bandwagon”, like the latest boy band or an Apple watch. Analysis of more than one million UK court records backs up the evidence suggesting otherwise:

For The Mail, one can only assume that the anti-racism bandwagon is similar to the equal marriage or employment rights bandwagons. Coupled with demonising the protesters through alarmist language like “extremist”, the trivialisation of structural discrimination is an attempt to suppress those who stand against it.

But the people are speaking up:

We call a nationwide #Shutdown because #BlackLivesMatter, because this is a crisis.

Within the article, The Mail showcased the complaints of Middle England:

I’m all for equality but how does stopping hard working people from going on holiday at Heathrow help? #BlackLivesMatter

Ironically, the fact this tweet is being cited shows how the protest will help – it’s getting widespread media coverage. Heathrow Airport said the protest did not appear to cause people to miss flights. 10 people were arrested outside the airport.

To be stuck in traffic is an irritation. To be denied justice for decades is a crisis.

As well as commemorating the fifth anniversary of Mark Duggan’s death at the hands of the Metropolitan Police, the timing of the demonstration is also significant because racist hate crime has spiked 42% post-Brexit.

Duggan was killed by a police marksman in August 2011, sparking nationwide riots. Despite the 29-year-old being unarmed, the High Court upheld Duggan’s death as a ‘lawful killing’ in 2014.

How utterly selfish! Why ruin innocent people’s holiday or work? Every life matters, not just #BlackLivesMatter

There were great responses to the ‘all lives matter’ response on Twitter:

.@clarknat @Domash101 @ukblm I'll stop posting this when ppl stop coming out with such foolishness pic.twitter.com/jbk5J3rjOl

All lives do matter. And that’s the problem. Black lives matter, too. The ‘too’ is implied. Responding with ‘all lives matter’ looks either ignorant or disingenuous, serving as a distraction from the mountain of evidence showing structural discrimination against black people.

Over an eight year period in England and Wales, just 1% of allegations of police racism by members of the public were upheld. And in Nottingham, the police are continuing to whitewash institutional racism:

Screens used with #BlackLivesMatter activists in Nottingham to reduce visibility. Name for it: whitewashing. pic.twitter.com/hTTpDHLJsP

Traffic delays are a small price to pay for wall-to-wall media coverage drawing attention to discrimination faced by minority ethnic citizens every day. Let’s express solidarity and hope the causes are heard far and wide.

– Show solidarity with the protesters through the hashtag #BlackLivesMatter