Jeremy Corbyn lays out his plan for the NHS in under a minute, and almost breaks the internet [VIDEO] - Canary 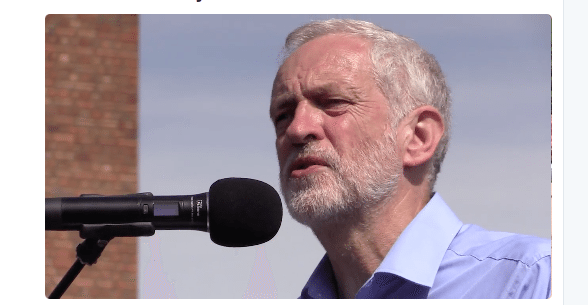 As the May government continues its war with junior doctors and the NHS, Labour leader Jeremy Corbyn has set out a very different vision for the nation’s primary public service – and it took him less than one minute to explain it.

Jeremy Corbyn’s plan is to fully renationalise the NHS. As he says in the video, which has since gone viral:

All the time I’ve been in parliament, I’ve been opposed to privatisation of the NHS and I voted against it with colleagues in the Parliamentary Labour Party over many years because we wanted to see a fully-funded, public, National Health Service.

The Tories have sought to privatise it. A Labour government will have to take the whole NHS into public ownership and make sure it remains there.

This signifies a sharp change in policy from Conservative and former Labour governments, which have introduced privatisation into the public service.

A 2012 report by the Treasury Committee condemned the Private Finance Initiative as “always… more expensive than government borrowing”. The report continues, saying:

we have not seen clear areas of savings and benefits in other areas… quality was lower in PFI buildings (and)… PFI is also inherently inflexible, especially for NHS projects.

The report did identify major benefits to PFI, unrelated to absolute costs or value for money:

Another benefit of PFI is that it allows the private sector to develop the infrastructure to deliver national services while shifting the costs and the risk to the taxpayer. Put another way, the taxpayer is funding the development of a private network of service providers.

The loan provider of the PFI scheme (the bank) retains ownership of the asset (the school or hospital) for at least the term of the loan (25-30 years) or in the case of default.

At least 91 pieces of public infrastructure are now owned in this way.

HSBC has a controlling stake in 27 PFI projects, predominantly schools and hospitals. It is now the outright owner of three NHS hospitals in Barnet, Central Middlesex and West Middlesex.

In fact, the only people who are not benefitting from PFI are the people actually paying for it: the taxpayer.

Some might well ask – so what? If the services are still free at the point of use, what do we care who provides them, or who owns them?

The service might be free at the point of use, but it is not free. Our taxes pay for the services. PFI, according to the Treasury Committee’s own report, is proven not to provide value for money for the taxpayer. Already, 22 of the 103 NHS trusts to enter the PFI scheme are facing financial difficulty due to the exorbitant PFI repayments. Some hospitals are having to hand over a fifth of their annual budget to pay for the PFI deal.

These costs are resulting in the closures of hospitals and schools. In short, we’re being bankrupted.

As the health care disaster in Mid Staffordshire and the NHS 111 scandal taught us, prioritising the financialisation of a service over its core purpose (helping people) costs lives.

Real people get poor quality care and die as a result.

Historically, a national construction project would have created jobs in a domestic construction industry, profits for domestic building and services firms, a publicly owned asset, and tax revenues to the Treasury.

Now, the taxpayer forks out double the costs for the build, while the profits (and in many cases the assets themselves) go to an offshore company which is not eligible to pay taxes in the UK. Even the jobs themselves are often offshore and outsourced.

This means money is being siphoned out of our economy.

Under New Labour, £780m of NHS spending was blown on 70 reorganisations in just four years between 2005 and 2009. The Conservatives only accelerated this project. Their latest major reorganisation of the NHS, under the Health and Social Care Act, sucked another £4bn out of the health service.

The S75 Regulations of the Conservative government’s Health and Social Care Act aim to parcel up NHS services for the purpose of selling them to private providers. These so-called ‘Competition Regulations’ force the NHS to put all but a tiny minority of services out for competitive tender. The majority of services currently run by the NHS will shortly and swiftly be turned over to profit-making private healthcare providers. This is privatisation by the back door. To give just two examples among many:

Both areas mentioned above have seen serious performance issues and large reductions of staff.

A report by corporate finance consultancy firm Catalyst estimated that newly privatised healthcare services will be worth up to £20bn over the next few years. Private companies Circle, Virgin Care and Serco won contracts worth £700m to provide NHS services that same year, and NHS outsourcing to private providers rose by 10%. By 2020, 40% of the NHS will have been privatised.

Ultimately, as seen in Hinchingbrooke hospital, it is the public and not the private side of the ‘partnership’ that gets the blame when the service inevitably collapses.

Despite being an entirely manufactured ‘cost inefficiency’ project for the benefit of private companies, the PFI scandal is being used by those vested interests as a case for even more privatisation. It is turned into proof positive that publicly run services are inherently inefficient, bureaucratic and costly. They claim the answer is to allow the market (those same banks and private service providers who bankrupted the services in the first place) to take over entirely.

What Corbyn has announced is the end of this failed project, and a real NHS – with public money paying public service workers to deliver a truly public service.

As Shadow Health Secretary Diane Abbott laid out during the launch of the policy recently: at the next general election, voters will (for the first time) have the chance to vote PFI, banks, and profit-making companies out of the NHS.