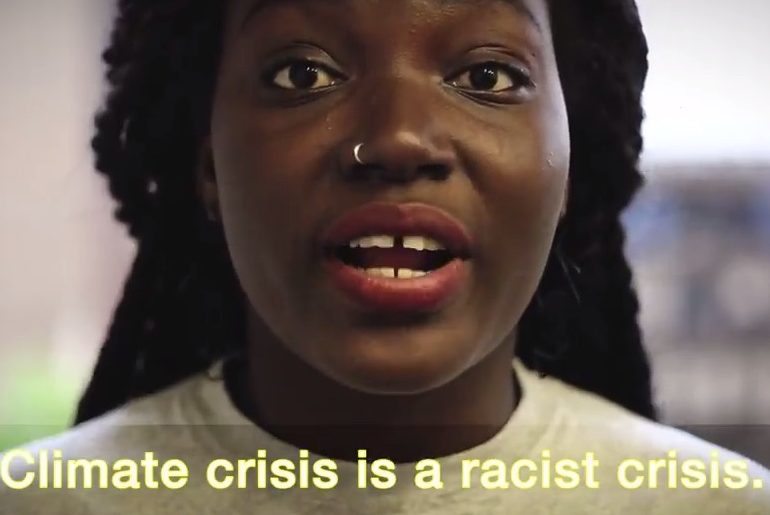 UK Black Lives Matter (UKBLM) protesters grounded all flights from London City Airport on 6 September in a protest against the disproportionate impact that climate change has on black people in the UK and across the world.

Nine people were arrested after occupying the runway. In a statement, UKBLM said:

Whilst at London City Airport a small elite is able to fly, in 2016 alone 3,176 migrants are known to have died or gone missing in the Mediterranean.

We note, however, that the UK is willing to charter special flights to remove black people from the country based on their immigration status.

In the video shared on UKBLM social media outlets, a range of black activists quote figures including the fact that, according to the UN High Commission for Refugees, there could be two hundred million refugees displaced by climate change – and possibly up to a billion.

They point out that seven out of ten of the countries most affected by climate change are in sub-Saharan Africa.

Studies by UNICEF have further determined that climate change is already impacting the lives of people – especially the young – in countries that are already fragile.

In fact, all over the world, it is the poor and most vulnerable people who will suffer first from climate change. In many cases, ethnicity is inextricably linked with poverty. And it is for this reason that UKBLM has declared that “the climate crisis is a racist crisis”.

London City Airport, the group points out, is located in Newham – an area where 40% of the population earns £20,000 or less, there is a well-publicised housing crisis and, as UKBLM member Joshua Virasami told BBC London, a prominent black community. He said:

In Britain, 28% of black people are more likely to be exposed to air pollution… being in closest proximity to the industries causing climate change.

It is often the case that industrial areas, power plants, and airports are in more disadvantaged areas. And when ministers approved the £344m expansion of City Airport earlier this year, they didn’t just threaten the well-being of the communities in Newham. They threatened to worsen climate change for the rest of the world.

The group’s action certainly had an impact. All flights to and from the airport were suspended.

Whether the disruption will cause the people who need to take heed to listen remains to be seen. But one thing seems certain – UKBLM isn’t going anywhere.