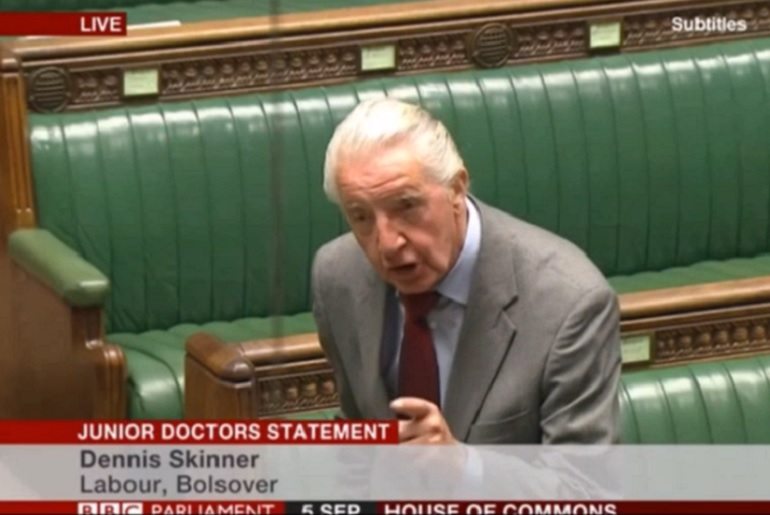 Dennis Skinner, the MP known as the ‘Beast of Bolsover’, once again lived up to his legendary title by slamming Jeremy Hunt over the controversial junior doctors’ contract. But this time, instead of going in guns blazing and telling Hunt “to wipe that smirk off his face” like he did four months ago, Skinner maintained a much cooler approach. And his well-crafted argument left Hunt almost lost for words.

The recent debate in the House of Commons saw Hunt once again guilt-tripping doctors over their decision to strike. While next week’s strike has been called off, more are planned later in the year. And Hunt stated that these would bring “unprecedented misery” to patients, arguing:

The most vulnerable patients, there is a real risk for them. Those people should be checked at least twice a day by someone experienced enough to do it.

In a shockingly poorly attended debate on both sides of the House, the task of opposing Hunt and defending the junior doctors was left to Skinner. And he handled it beautifully.

It takes two to cause a strike and that’s why he [Hunt] should look at this proposal again.

Calling Hunt out on his belligerent campaign to force the contract through, Skinner goes on to say:

He’s [Hunt] very airy fairy about training these doctors for the future. He’s not being clinically correct at all. He’s heard from people that recently worked there. Why doesn’t he reassess it? The seven day week. Get round the table, stop imposing a settlement and come to a negotiated agreement.

Skinner calls for a reassessment that involves proper negotiation, a motion many members of the health service would support. Yet, in typical fashion, the Health Secretary responds with utter denial. He states:

Well… If I am wrong about this, then so are the leaders of the BMA because they said the contract I wanted to impose was a good contract and a good deal for junior doctors.

Commenting on Hunt’s imposition of the contract, she says:

Calling Hunt out for his efforts to “demonise” junior doctors, Abbot argues:

The public is looking for the Secretary of State to try and meet the junior doctors. Stop vilifying. Stop pretending they’re the enemy within and meet their reasonable demands.

As the debate around the junior doctors’ contract continues, there is no doubt which MPs are willing to stand up and back their corner. With Hunt aggressively trying to impose his plan, it is of utmost importance that the public gets behind the junior doctors and supports their desire for a fairer and more sustainable contract.

– Support the crowdfunding campaign to make a film about Dennis Skinner.

– Support the junior doctor’s pop song about the NHS.

– Find out more from The Canary about how the junior doctors are trying to oppose Hunt.