Theresa May tries to mask Conservative failings with a scripted joke at PMQs, but falls flat on her face [VIDEO] - Canary 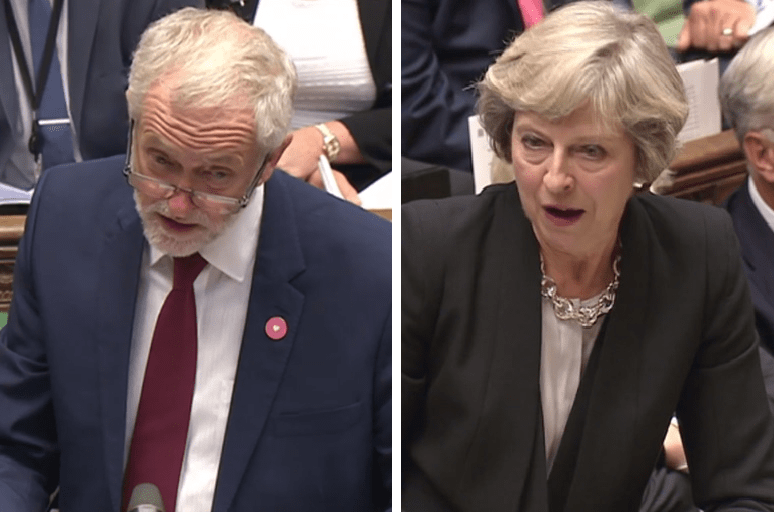 Rather than answering Jeremy Corbyn’s questions on the housing crisis at the first Prime Minister’s Questions (PMQs) after summer recess, Theresa May responded with scripted jokes instead.

In 2015, we paid landlords £9.3bn in housing benefit, up 42% from 2008. And for his third question, Corbyn challenged May on these public handouts to landlords, saying:

Devastating figures released over the summer show that £9.3bn of public money is paid directly to private landlords. Does the Prime Minister think this £9.3bn into the private rented market is really money well spent?

Attempting to mask the massive handout to landlords, May took a leaf out of David Cameron’s book, telling a scripted joke:

Everything that he says only tells us all we need to know about modern Labour. The train’s left the station. The seats are all empty. The leader’s on the floor. Even on rolling stock, they’re a laughing stock.

But the cheap shot fell flat.

Theresa May needs to sack her comedy scriptwriter or learn how to tell a joke. Cringe. #PMQs

In #PMQs we see serious issues that really affect people like us being laughed off by the privileged few who will never experience hardship.

her pre-scripted anti-Corbyn jibes (in response to questions two and three) came over as unprovoked, gratuitous and consequently rather cheap.

Question Two, and a questionable quote from May

For question two, the Labour leader had said:

The government’s own figures show that, since 2012, only one in ten (4,594 of 49,573) council homes have been replaced by Local Authorities. But after brazenly lying and claiming “we have delivered on the one-for-one replacement”, May attempted to divert attention again, with another joke.

Referencing Corbyn asking his Twitter followers for PMQs suggestions, May read out one response suggesting a question for her:

Does she know that in a recent poll on who would make the better prime minister, ‘don’t know’ scored higher than Jeremy Corbyn?

Conservative policies appear to extract billions from public funds and tenants while handing those billions to landlords. 128 Conservative MPs (39%) are landlords themselves, betraying a direct financial benefit in keeping house prices high.

But this problem spans across parliament, as 22% of Labour and 26% of SNP MPs are landlords, too. One fifth of MPs are private landlords, compared to only 3 in 100 across the electorate.

In January, at least 73 landlord MPs voted against proposals requiring rented houses to be “fit for human habitation”. Labour’s amendment to the housing bill was voted down by 312 votes to 219, which Corbyn used as a point of attack at PMQs this week.

Currently, if you earn the national average salary of £26,500, 91% of England and Wales would be beyond your income. On Wednesday, May made a mistake in trivialising such an important issue with scripted jokes. In opting for pre-prepped zingers over substance, the Prime Minister only betrayed the government’s utter failure to tackle the crisis.

– Check out our other articles on PMQs.