Britain has Starfleet ambitions, but we're being led by Ferengi [EDITORIAL] - Canary 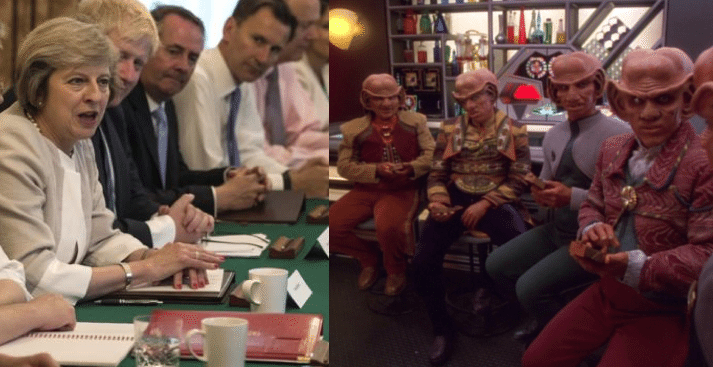 It is 50 years today since the USS Enterprise first set out to boldly go where no man had gone before and, as a Trekkie, I’m unashamedly going to crowbar this into the news agenda for the day. Britain has a lot to learn from Star Trek. We certainly have Starfleet ambitions, but our leaders are all Ferengi.

In Star Trek, humankind has evolved beyond the petty squabbles of today, and particularly the pursuit of money and the economics of capitalism. They look back on their money-obsessed, violent past the way we might recoil at the memory of an embarrassing childhood tantrum. In the Star Trek age, humanity is about peace, excellence and exploration – all endeavours which rely far more on cooperation than on competition.

But light years away, on a planet called Ferengar, live the Ferengi. They developed their society in quite a different way. They are the arch-capitalists of the Star Trek franchise, willing to throw their own Grand Nagus (leader) under the bus in the name of gold-pressed Latinum (currency). The Ferengi are funny and charming, and they have developed warp capability and other technologies – but their inability to work as a team, to pool their mutual resources, and to operate with a long-term vision all hold them back from being anything more than an ‘also-ran’ in the Federation of Planets.

They always struck me as remarkably similar to late-20th-century capitalists. Although in fairness, they’ve been quite overshadowed by their 21st century counterparts.

The reaction of today’s political and media class to the likes of Jeremy Corbyn and Caroline Lucas is not dissimilar to the reaction of Ferengi to Mr Spock or Voyager’s Captain Kathryn Janeway. They point and laugh, they scoff, they become angry, they attempt to manipulate all possible levers to win… but ultimately, they lose. And on some level, they know they are inferior, that their ambitions are meagre – and yet they cannot break out of their obsessively short-term thinking.

Britain is facing some of the biggest questions we have faced in modern times. Our role in the international community, our place in Europe without the EU, the future of our public services and welfare state, our commitment to religious, ethnic and political diversity, how to create an environmentally sustainable economy, how to deliver on our social and economic goals with a population which is living longer – all these questions require strategic, creative thinking, and powerful leadership.

Powerful leadership is not listening to a focus group, forming attractive soundbites that convince a narrow majority to elect you, and then doing whatever the hell you like. Powerful leadership is establishing the best way forward, and taking that argument to the unconvinced in a powerful and compelling way. It means standing for that future in the face of no agreement. Because in order to lead the pack, you must arrive first. You are charting a new course, and it takes time, commitment and courage to lead people in that new direction – especially when they are afraid, uncertain, and surrounded by Ferengi screaming about the impact on gold-pressed Latinum.

This is what is so threatening to the establishment about the behaviour of both the electorate (in Brexit) and certain members of the political and media class who are refusing to cave to Ferengi pressures. We are developing Starfleet ambitions, and the courage to stand for those aspirations in the face of whatever is thrown. So as terrifying as times are today, we should not forget there is also great hope – as we boldly go where no one has gone before.