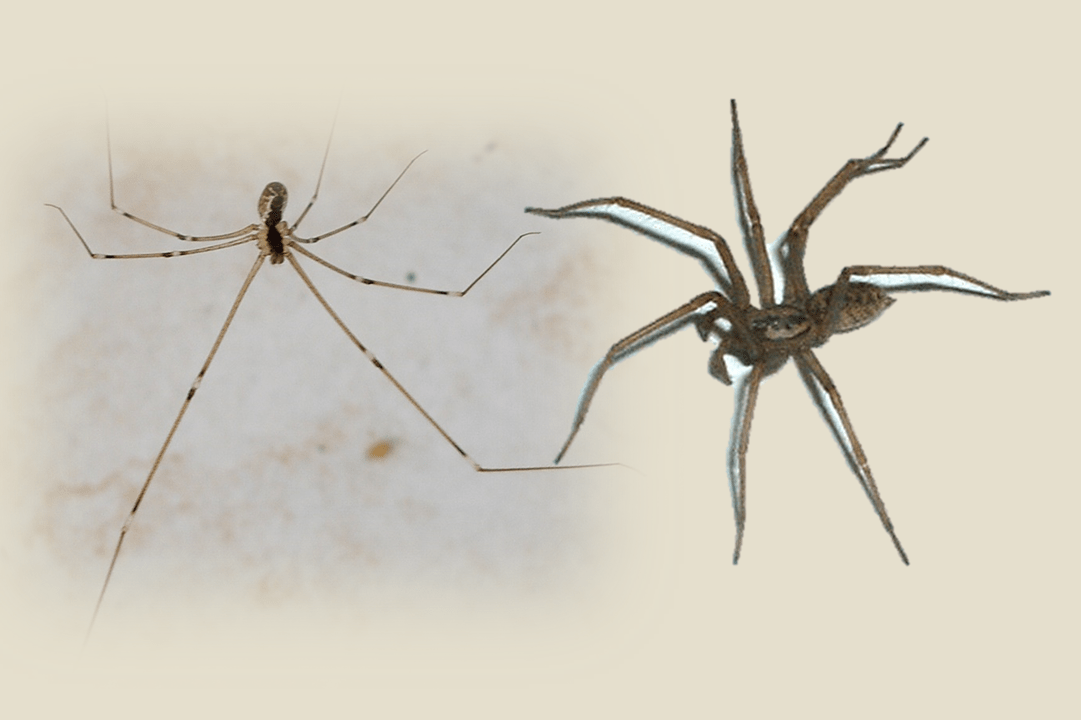 Anyone who fears that modern life has lost touch with the natural rhythms of nature should draw comfort from the predictable wave of spider-based coverage that swarms all over the media every late summer. But sadly, the vast majority of that coverage doesn’t say good things about our relationship with the natural world.

Firstly, an admission: I’m not great with spiders. Little ones are fine but your classic house spider, like the one above on the right, makes me go all hot and cold. If you struggled to even click the image on your touchscreen in order to read this article, I sympathise, and I salute your bravery. If you feel the world would be an easier place without spiders, I sympathise. If you’ve ever entertained dark thoughts and ill intent towards spiders, I sympathise.

The enemy within our homes

They provoke a very strong reaction in many people, perhaps due to their appearance but possibly for deeper reasons.

There is a sense of invasion into ‘our’ space. House spiders are incredibly fast and have a strong homing instinct. There’s every possibility that when we take one outside and deposit it in the undergrowth, it’s back indoors before we are.

And we can never quite escape the feeling that they might bite us. Our cultural relationship with predatory creatures is nervous to say the least, historically-rooted and now continually jabbed by tabloid fear-mongering. Headlines about sex-crazed spiders the size of mice invading our homes are more or less standard. Such nonsense doesn’t deserve to be dignified with a link but you can Google it if you want.

Give spiders a chance

But I’m trying to be more positive towards spiders. Yes, even house spiders. Because if we can get it right on spiders, perhaps there’s hope for our wider attitudes toward nature. The science of ecology, which studies the nuts and bolts of how living things interact, is making new discoveries all the time about how what we once thought of as simple ‘food chains’ are actually complex webs. We’re realising that when a spider catches a fly, that doesn’t just have one single result, namely one less fly. The very presence of a predator in any ecosystem creates ripples of consequence which can affect everything else there. And it’s definitely not a simple case of bigger eats smaller.

Our houses are ecosystems – specific environments with their own set of interacting pressures and relationships between the myriad living things within. And, whether we like it or not, that includes a lot of spiders. The big house spiders are just more visible and more obviously seem like top predators. We see them much more at this time of year because they’re moving into warmer parts of our houses as the weather begins to cool, and because they’re looking for mates. The continued presence of house spiders helps preserve balance in the ecosystem of our home. If you’re going to try and clear out all the spiders, you’d better like flies. Lots of flies.

Nature has a way of achieving balance. And humans have a way of messing that up. Many of the spider articles I’ve read recently feature tiny little fact boxes in which they point out that spiders are a good thing. But these are then swamped by ‘Ten ways to spider-proof your house’ type sections. And all are coloured by headlines suggesting an imminent arachnid apocalypse. The overriding theme is that homes must be devoid of any other living things, with special dispensation for dogs, cats, goldfish and such. It’s all too easy to take this attitude outside into the garden, the farm, the park, even the wider countryside, and attempt the pointless, endless task of trying to control everything.

Nature is too clever, too fast, too wriggly, too persistent. We’ll always find ourselves living with spiders, so why not try and do it with good grace? I started by leaving some of those straggly webs you get in the corners of ceilings unvacuumed. Because strangely, the leggy fellows who make them don’t bother me that much. When they walk across floors it’s in a slow, comical gait, not the frantic scuttle of a house spider. Mostly, they just hang about. They’re often called Daddy Long Legs spiders, although that invites confusion with crane flies and harvestmen. You can call them Pholcids if you want to sound technical and a bit sci-fi. There’s one on the left of the image above.

But who would have thought? Pholcids are the great stealth predator of the spider world. They’ll polish off flies as happily as anything. But their favourite food? House spiders. Nature’s balance. So maybe try an ecological experiment over the next year. Don’t waste your money on fly spray and save time on the hoovering. Support your local Pholcid. You may get the occasional house spider, but not as many as if you’d mopped up all the ceiling webs. You’ll certainly have fewer flies buzzing round. And perhaps it will help you feel more positive about spiders in general.

But if you still feel the need to stand on a chair and hyperventilate when one sprints across the living room carpet, I won’t judge you.