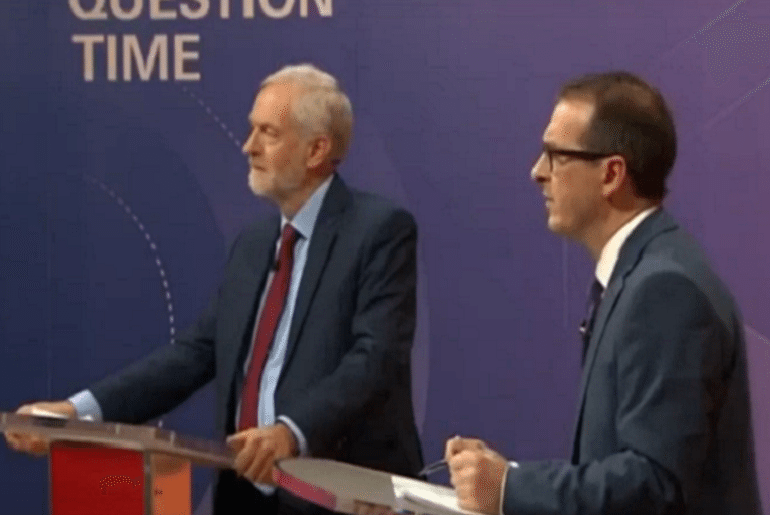 In another blatant case of media bias, The Telegraph has penned an ode to Owen Smith. After the BBC’s Question Time leadership debate on Thursday 8 September, writer and political strategist John McTernan has written an article slamming Jeremy Corbyn, claiming Owen Smith “wiped the floor” with him during the programme. But is this delusion or denial? Because for anyone who watched the programme, it clearly wasn’t true.

McTernan is no stranger to bashing Corbyn’s every move. His previous articles include: “Jeremy Corbyn sabotaged the pro-EU campaign, and is doing much worse to Labour” and “Now it is clear: a vote for Jeremy Corbyn is a vote for oblivion.” But this article goes beyond his previous pieces. For anyone who actually watched the programme could see that Corbyn portrayed himself as a stronger and fairer leader. Even Telegraph readers.

A poll embedded in McTernan’s article asks “Who won the BBC’s special Labour-themed Question Time?” At the time of writing, 60% of 11,100 respondents have voted for Jeremy Corbyn. 22% have voted ‘nobody’. And only 18% have voted for Owen Smith. Given this, one must question what version of Question Time McTernan actually watched. The public even took to Twitter to call him out on his article:

'owen Smith wiped the floor with Jeremy Corbyn' ???…you do realise that this debate was broadcast on the BBC, we watched it

I'm not a Labour voter but you must have been watching a different programme to me. Corbyn did far better.

In tonight’s BBC ‘Question Time’ special, devoted to the Labour leadership election, the foundational myth of Corbynism was repeated again and again. It is that old favourite – ‘the stab in the back’.

This was the pattern throughout the debate: Smith answering questions clearly and punchily, talking through the camera to the country; Corbyn basking in adulation and talking in generalities.

It’s hard to believe McTernan’s incredulity. Take Smith’s response to a question about the Brexit vote. Smith stumbles over the question about Brexit and ends up stating that the Leave vote should be ignored, even claiming that he would organise another referendum vote if he were named leader. Unlike Corbyn, who claims to respect the vote and sets out plans to work on maintaining a relationship with the EU, Smith appears oblivious to what Brexit even means.

Despite this, McTernan’s article continues in the same fashion of praising Smith on his “clear and punchy” responses and slamming Corbyn for “basking in adulation and talking in generalities”.

Unlike Corbyn, who never attacked Smith on his responses and even praised him for his commitment to tackling racism and wished for them to work together after the election, Smith took every opportunity to bash his opponent. It’s saddening to see the mainstream media, once again, support this aggressive stance. A stance McTernan not only reserves for Corbyn, but also his supporters. He states:

One Corbynista told Owen Smith “You’re in the wrong party!”. When Smith pulled him up on that, condemning it as abuse, the man was genuinely aggrieved – “How is that abuse?” That, in the end, was the most telling moment – the man meant it, he really didn’t think that calling Owen Smith a Tory was in any way wrong. That is what the Labour Party has come to under Corbyn’s leadership. It is why he must go, and why he almost certainly won’t.

Unlike the picture McTernan paints, this so-called “abuse” occurred when Smith said he would not work with Corbyn if Corbyn remained as leader. The “Corbynista” pointed out that if he was true Labour he would work under any Labour leader.

Given all the media bias over the Labour leadership, it is not surprising to see McTernan using anything he can get his hands on to discredit Corbyn. At the same time as this article, The Telegraph has launched another attack against Corbyn, proving its resolve to discredit him before the elections. 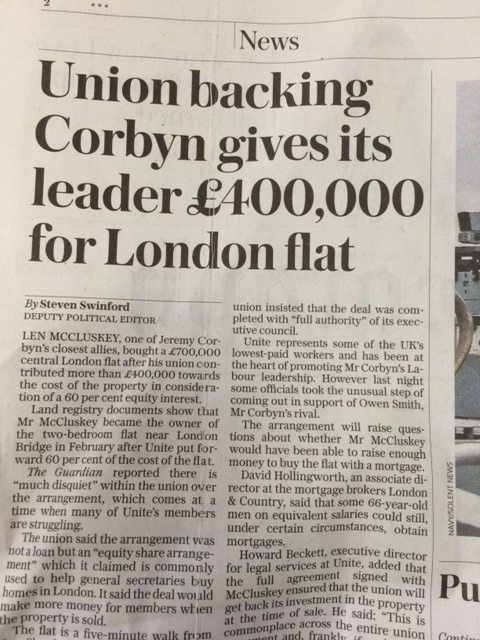 It’s saddening to think that those who did not watch Question Time and only read McTernan’s piece will potentially believe every word. But what’s reassuring is that those who did, from all political stances, have acknowledged how biased The Telegraph has become.

There’s no better time for a media revolution, and that’s where The Canary comes in.

– Read more from The Canary about the leadership election.

– If you appreciate what we do, please consider supporting us. Also, there are many other new media organisations doing their best to deliver news, analysis, and opinion in a more independent and ethical way. Please support them, and add more that you like in the comments section: