We made the Labour Party so furious they wrote us a letter, and it's hilarious [OPINION] - Canary 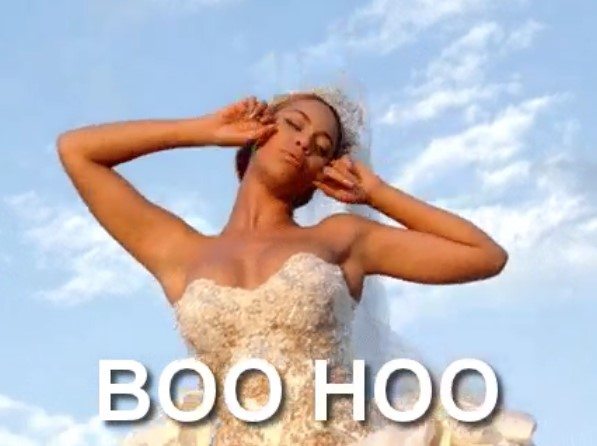 Following an opinion column The Canary published on 6 September, a furious Labour Party sent the author a letter by email. And the result is hilarious and telling, in equal measure. The author is, of course, me. And the email was in response to my column entitled This outspoken Labour critic has been allowed to join the Labour Party, and it’s a disgrace.

On 6 September, I wrote about how, against all the odds, I had miraculously been allowed a vote in the Labour leadership contest. I am a member of the GMB union, and in July had applied for affiliated Labour membership as a sort of ‘experiment’, to see how robust their vetting procedures were. Very little happened, until 2 September. Just after 5pm, an email dropped into my inbox giving me confirmation of my vote, with the codes I needed to use.

I was absolutely gobsmacked that I, a very public critic of the Labour Party, had been allowed a vote. I had written on the apparent ‘purge’ of members and was both overwhelmed and stunned by the responses I got to my request for people’s stories. Some were angry; others baffled; a few laughed it off. But many people were genuinely upset that they wouldn’t be able to vote. And, more often than not, it was for the most ridiculous of reasons. Tweeting once in support of the Green Party. Apparently “abusing” a Labour MP by telling them they were angry. Being “in breach of the party’s recruitment rules“, without any explanation. Tweeting in support of Palestine. Voicing their displeasure at Syrian airstrikes. And being a former member of another party.

I had also been infuriated by the people who, apparently, were allowed a vote. Labour councillor John Ferrett, who called Corbyn supporters “lying Trots“. Party donor Michael Foster, who labelled people “Nazi Stormtroopers” in The Daily Mail. A former UKIP parliamentary candidate in the 2015 general election. John McTernan, who threatened an SNP MP with violence and called for a trade union to be crushed by the Tories. A Liberal Democrat councillor who defected to Labour. Owen Smith, who used a mental health slur at a public meeting. Running for the party leadership. All these people and their behaviour were seemingly acceptable to the Labour machinery.

Labour: they don’t hang around

Hence I wrote my column on 6 September; the serious point being that by ostracising so many people who would want to support the party, Labour is only damaging itself. Furthermore, that it also shows how little the party thinks of its membership.

The column went out at 4.30pm. The response from readers was generally positive, with many commenting what an important point I had made about Labour procedures. At 6.36pm, I tweeted this:

So @UKLabour @IainMcNicol I'm waiting to be purged.

This is about ME & you expel others for less causing huge upset https://t.co/U8ciYWXJ5o

I’m sure about two minutes later I heard a collective scream from the Labour Party Compliance Unit in Newcastle; that, or Iain McNicol shouting “SH*T!!! That f*cking Mr Topple has slipped through the net!!!” Because 17 minutes later, I received a letter via email. And horror of horrors, I had been ‘purged’.

Here is the offending email: 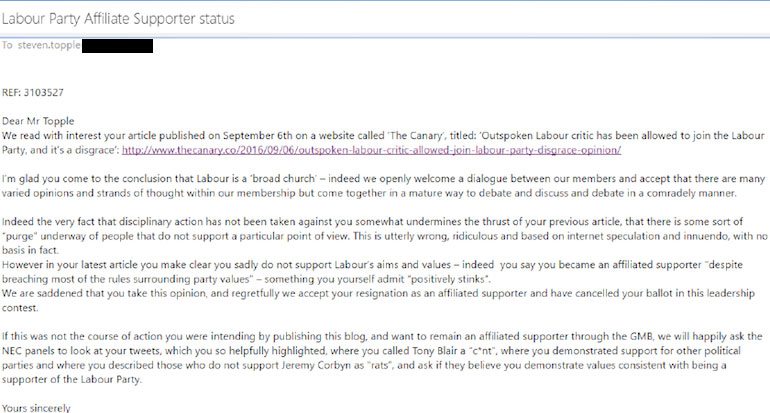 Now, I don’t know about you – but there are a few issues here.

We, at The Canary, are mortified at the thought that the Labour Party Compliance Unit refers to us as “a website called”. Do they not know who we are? Would they refer to The Guardian as “a newspaper called”? We thought we were so popular! Or, is it that the author of the email is being intentionally condescending? As one of our other writers at The Canary so accurately said:

as if they aren’t trawling Canary comments pon de regular to try and ban people.

Regarding the “broad church” comments, I did indeed say that. I believe that surely Labour needs to win over people who have previously not voted for it in order to stand a chance of being in government. Not be a “broad church” where the congregation are forced to drink from the Owen Smith font of Kool-Aid or be banished into the wilderness forever.

I was, however, flattered that “disciplinary action” had not been taken against me sooner. Delighted, in fact. Because otherwise, I would never have been able to write Tuesday’s article in the first place.

But their assertion that the possibility of a ‘purge’ is “utterly wrong, ridiculous and based on internet speculation and innuendo, with no basis in fact” would seem at odds with official party line. Over 3,000 people have already been expelled from voting in the leadership contest. And that’s by Labour’s own admission. Although a ‘purge’ being “innuendo”? Unless Owen Smith’s 29-inch ‘member’ has been expelled, I’m unsure what they’re implying…

But I took heart that they recognised that I and the party are just not compatible. My relationship with Labour is much like the Lady Gaga song Bad Romance. I do indeed “want your drama”, Labour, as it gives me so much material to write about. I’ll leave “the touch of your hand” though, thanks. Because, as Simon Danczuk proved, you never know where it may have been. And as for “leather-studded kisses”, I think Keith Vaz has that one covered. You and me, Labour, if we were ever joined in political matrimony, would just have a Bad Romance. It really isn’t worth it.

I’m unsure, however, if my article equated to tendering my “resignation”. This is troublesome, and I’m almost tempted to appeal the decision via Labour’s National Executive Committee (NEC). More for the entertainment value of knowing that someone, somewhere in Labour HQ would have to read out “Tony Blair is a c*nt” as evidence of my breaching of party values.

So, it is with a heavy heart that I now won’t be able to vote in the Labour Party leadership election. Despite all my sterling campaigning for the party; the hours I’ve spent, hunched over my laptop, writing hundreds of thousands of words about them, and my dedicated efforts in furthering Labour values. Ahem.

I think my feelings are best summed up by this tweet. Once again, in the political wilderness: