Disabled people gather to remember the victims of government cuts, and bring Westminster to a standstill [IMAGES] - The Canary 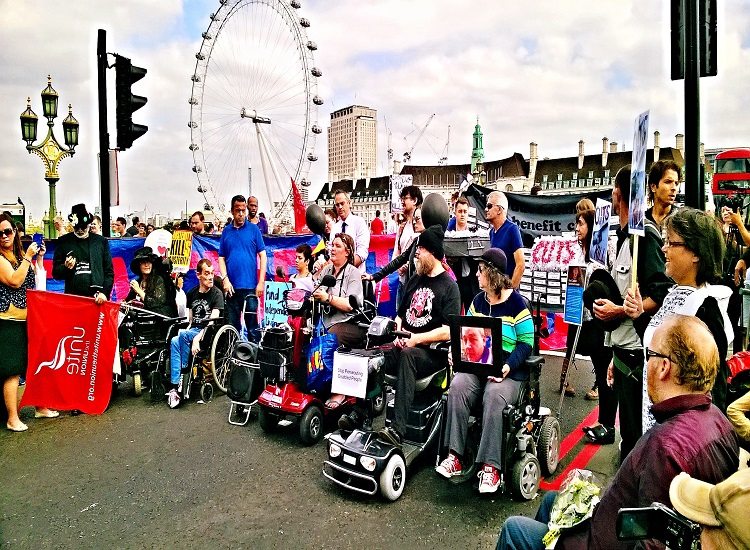 Disabled rights activists brought Downing Street and Westminster to a standstill on 7 September as part of a week-long campaign against the Conservative government. Activists coordinated a vocal protest outside Number 10 to remember the victims of welfare reform. They then blocked traffic in all directions on Westminster Bridge for over two hours. This was during the first Prime Minister’s Questions (PMQs) of this parliament.

Disabled People Against Cuts (DPAC) said in a statement:

We call on the new Prime Minister to make public the findings of the UN investigation in the UK, into violations of deaf and disabled people’s rights; to scrap the Work Capability Assessment and to commit to preventing future benefit-related deaths.

The protest began at 12pm. Moving accounts were given of the real-life impacts of six years of Conservative welfare reform and austerity. Figures collated by DPAC show that, since November 2015, 14 people have killed themselves after having their benefits stopped. There followed a reading of all the names of people who had died after being declared “fit for work” by the Department of Work and Pensions: 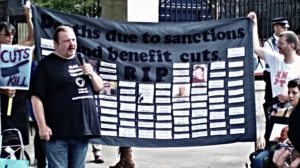 And, as The Canary recently reported, the UN Human Rights Committee published a damning report into the effect that years of Conservative policies have had on disabled people. It was “seriously” and “deeply concerned” about the effects of successive reforms to welfare policy, the ‘Bedroom Tax’ and the Conservatives’ perpetual austerity. The committee said that the Conservatives must review all austerity measures since 2010, and said that all cuts to benefits under the previous and current governments should be reversed.

At the protest, swathes of white flowers were handed out.

The protest then made its way to Westminster Bridge, where a coffin representing those who had died after being declared “fit for work” led the sizeable crowd that had gathered: 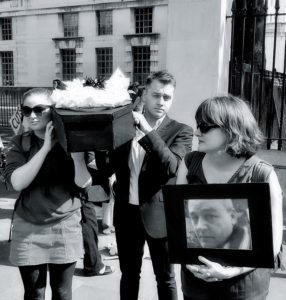 In a week of coordinated action, which started on 4 September, DPAC wants to highlight the impact that the government’s austerity agenda has disproportionately had on disabled people.

As DPAC says, the government’s policies are taking disabled people’s rights “back decades, with attacks on every area of our lives, from education to independent living to employment to income.”

A week of action

There was also a peaceful occupation of a space in The Tate Gallery on 4 September. In conjunction with colleagues at the Public and Commercial Services (PCS) union’s culture sector, a pop-up exhibition by disabled artists was parachuted into a vacant space at the London gallery. The results were well-received:

This is how you create a gallery! #Art4Rights now set up at @Tate , part of @Dis_PPL_Protest week of action pic.twitter.com/mWPXTNqVUG

On 5 September, DPAC (in partnership with Inclusion London) launched an impact report into the scrapping of the Independent Living Fund (ILF). As The Canary previously reported, the ILF was a scheme that helped over 18,000 disabled people with high support needs to live independently. It supported people to live in their own homes, to work, to access their communities, and to have a private family life. But it was scrapped by the Tories in June 2015, as it was deemed “financially unsustainable”.

Money is now handed out in the form of central grants which are distributed to local authorities. But this money isn’t ring-fenced, and many people have seen their support funding slashed by over 50%.

After the report launch, there was a “#Right2IL” pop-up theatre outside the Houses of Parliament, paying homage to independent living with poetry, spoken word and performance art: 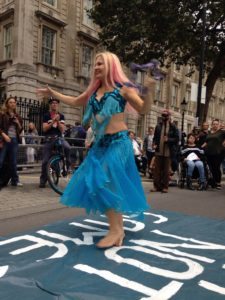 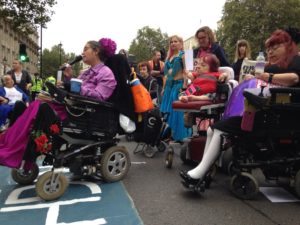 On 10 September, DPAC’s yearly conference will take place, with speakers from across the world including Shadow Chancellor John McDonnell and German disabled group the ‘ak Mob’.

McDonnell is a staunch supporter of DPAC, having been one of the few MPs to acknowledge its protest in the lobby of the Houses of Parliament in March. He was also present for the launch of the ILF impact report on 5 September, assuring those present that Labour would stand by them.

To finish off the week of action, Assisted Suicide: The Musical will be performed on 10 and 11 September at the Southbank Centre. Written by actor and activist Liz Carr of Silent Witness fame, the musical confronts the lack of creative work that exists in exploring this most topical taboo. The cast of performers expresses an important and often unheard perspective through the medium of musical theatre.

But the protest on 7 September was the focal point of the week. Blocking the junction on Westminster Bridge nearest Parliament, protesters called on Theresa May to stop the benefits cuts which are claimed to have killed hundreds, if not thousands, of people. Poetry was read out, real-life testimonies shared and chants of “no more deaths from benefit cuts” were repeatedly directed towards parliament. Jonathan Bartley, co-leader of the Green Party, was present, after he assured disabled people on 5 September that his party would stand by them. 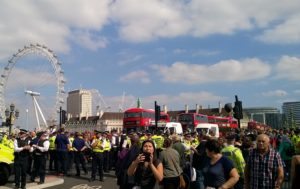 From inside parliament, Conservative MP for Newbury, Richard Benyon, made his feelings on the DPAC protest perfectly clear. But he soon deleted this tweet: 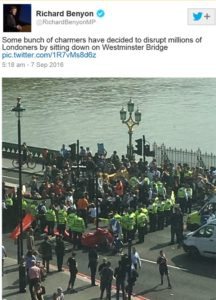 Hundreds of police officers were present and, while the protest itself was peaceful, accusations of heavy-handedness were made. Police were attempting to keep journalists away from the main block of activists, and repeatedly made attempts to break up the protest. Some members of the public saw fit to shout and swear at the disabled people protesting for their rights. One activist was pushed by a police officer, causing her to lose control of her electric wheelchair and smash into the bridge. Several were arrested:

DPAC explained that the week of action was in no way meant to detract from the successes of the Paralympics:

We are not against the Paralympics, nor Paralympians, indeed we wish them all success. But we want to remind spectators who are using social media that the vast majority of disabled people are not paralympian or superhuman. We’re people trying to live our lives to the fullest in spite of the barriers that society puts in our way. While we will not be protesting against the games themselves, we will be using this opportunity to raise awareness of the increasing numbers of disabled people whose access not only to sport and recreation but to basic human rights, such as support to eat, drink and use the toilet is being taken away as a result of the cuts.

When you hear some of the very real stories of what disabled people have to endure due to the Conservatives’ relentless drive for austerity, the reality hits home. As Mary-Ellen, a former ILF recipient, said on Monday:

The Independent Living Fund enabled me to get out of my house, to campaign, to do all sorts of different things. I’ve been Chair of three different disability groups, I went to Glastonbury… Since the closure of the ILF, my council initially wanted to cut my [support] from 12 hours a day to three hours a day. Literally just enough to get me out of bed in the morning, back into bed at night and have one meal during the day… When I said I needed someone to support me going to the toilet during these hours the council said they’d supply me with incontinence pants. If you put a child into nappies who doesn’t need them… and refuse to allow them to use the toilet for up to 12 hours at a time that would be considered criminal abuse.

The protest came on the same afternoon that Justice Secretary Liz Truss told MPs that the Human Rights Act will be scrapped. For disabled people, this is one of the most worrying times in decades. With support being cut, relentless attacks from the government, and hate crime rapidly rising, it’s little wonder that they feel they need to act. And in the 21st century, the fact that they still have to fight for their rights in such a public way should be a concern to us all.

– Volunteer to support people with a learning disability, through Mencap.

Featured image and embedded images via The Canary