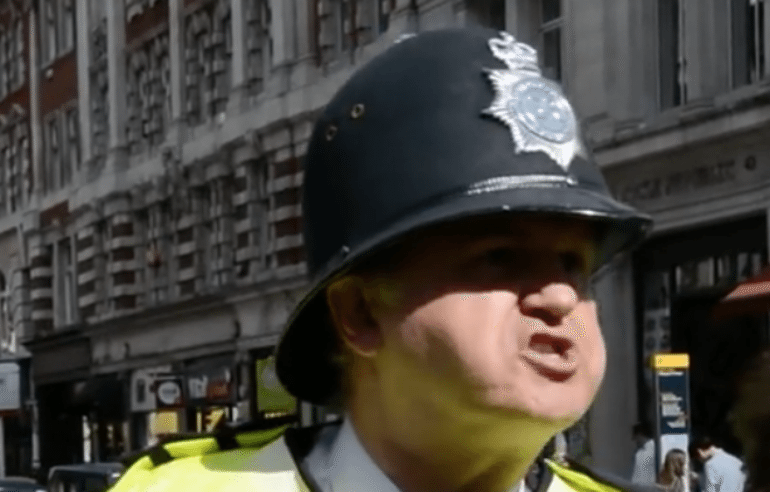 A police officer has been placed on restricted duties and is facing disciplinary action for gross misconduct after being accused of racism. But despite the incident being captured on video, the officer still denies being racist.

PC Marcus Tyson has been accused of racism for his behaviour during a pro-Kurdish protest in London earlier this year. He is caught on film saying to protesters (apparently without knowing whether they are British citizens or not):

When the protesters challenge him on his racism, he sneers at them and responds:

Get out of it.

He is also accused of assaulting the woman in the video, but he replies “good”.

Although it’s difficult to hear on the video what is said, one of those present appears to report his remarks to a sergeant towards the end of the video. Tyson responds by accusing them of lying:

I never said that. It’s a lie.

Unfortunately for Tyson, the incident was captured on video:

Due to the sound quality and the length of the video, it’s impossible to hear everything that’s said or know what events preceded this interaction. But what can be seen is a loud, vibrant demo, and a police officer responding with racism and, as pointed out in the video, the attitude of a petulant child.

Then, once confronted with his remarks and placed on restricted duties, Tyson still can’t see what he’s done wrong.

Speaking to The Sunday Times, Tyson has slammed “political correctness” and refused to accept that his statement could be construed as racism. He stated:

I would like to know upon what basis they regard my statement as being racist, it is purely a statement of fact that this is my country.

He described the action being taken against him as “widely over the top”, and further said:

There are an awful lot of my colleagues who are suffering from this awful and oppressive political correctness that’s infected the professional standards units in all of the boroughs and the Directorate of Professional Standards (DPS) Met-wide. It means that officers are afraid to do their jobs properly.

In fact, Tyson’s behaviour exemplifies the institutionalised racism which even senior officers admit exists in the Met police. In both making the comments and seeking to justify them, he is showing how and why the sort of policing that involves smashing windscreens over mistaken identity and arresting booksellers in Brixton is rife on our streets.

This isn’t “awful and oppressive political correctness”. This is an officer who is so blind to his own racism that he’s prepared to whinge to the press about how hard done by he is. And if this video is him doing his job properly, then the streets will be a lot safer if he is never allowed back on them in a uniform.