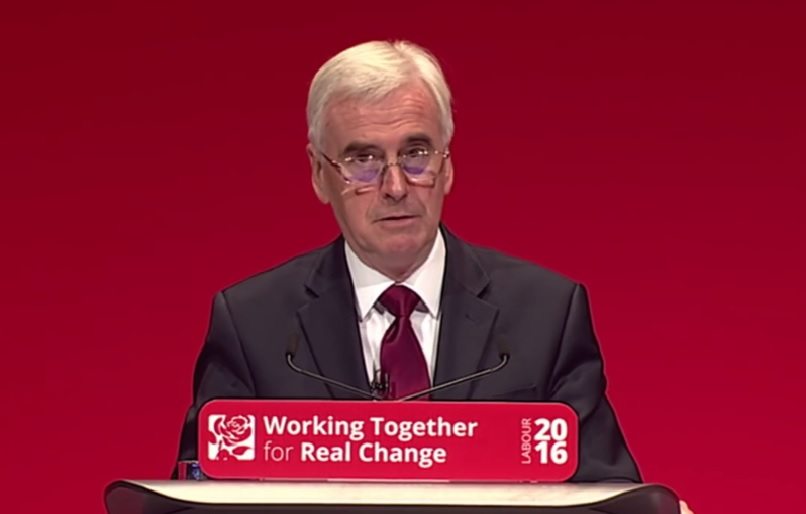 Shadow Chancellor John McDonnell received a standing ovation after concluding his speech at the Labour Party conference in Liverpool. And although his policy announcements generated much applause, it was his closing comment that brought everyone to their feet.

It was then that he invoked one of the city’s greatest heroes, giving attendees the chance to imagine a Labour future that most never thought possible.

McDonnell began his speech explaining that, following the Labour leadership election, his party now has to become “a government in waiting”. He noted what his party considers to be the current government’s failings. And he pledged to oppose austerity, the Transatlantic Trade and Investment Partnership (TTIP), and tackle poverty in the UK.

He laid out how Labour will work with like-minded parties across the EU to create a “new Europe”, which will protect jobs in the UK, deal with the issues surrounding immigration, and retain workers’ rights.

He promised that Labour would tackle tax avoidance (the practice of dodging taxes through legal loopholes), mapped out the party’s plans for a £250bn investment program, described how it will curb large corporations’ excesses, and laid out its proposals for ensuring more worker-owned businesses. A £10 living wage was also pledged.

After covering those plans and more, McDonnell detailed his own personal story. He explained how he was born in Liverpool, where the conference is taking place. Brought up in what studies have described as “some of the worst slum conditions” in the UK, McDonnell recalled his family celebrating moving into their first council house.

The Shadow Chancellor was born in an NHS hospital, benefited from a free education and, he explained, grew up in a time when “there was an atmosphere of eternal optimism”. But he claimed that, thanks to successive Tory governments, this optimism – grounded in the expectation that living standards would improve with each new generation – had now diminished.

Under Jeremy’s leadership, I believe that we can restore that optimism, people’s faith in the future.

So I say this, in the birthplace of John Lennon, it falls to us to inspire people to imagine again. Imagine the society we can create. It’s a society that’s radically transformed, radically fairer, more equal, more democratic. Yes, based upon a prosperous economy, that’s economically and environmentally sustainable, but where that prosperity is shared by all.

That’s our vision to rebuild and transform Britain. In this party you no longer have to whisper its name. It’s called socialism. Solidarity.

It was this closing statement that brought almost the entire conference to its feet. Obviously, the society McDonnell had called for attendees to imagine is one they applaud.

And the Shadow Chancellor’s final words rang true. It is less than two years since “Red Ed” was seen as a valid, and effective, smear. But Corbyn’s election, and his unashamed avowal of his political beliefs has brought socialism back into mainstream discourse. It’s no longer a dirty word. It’s now understood as just a political system some people believe in.

Of course, socialism was also intrinsic to the Labour Party’s formation. And if the reaction to its mention by McDonnell is anything to go by, it’s still very popular in the Labour movement now.

Featured image via the Labour Party/Youtube